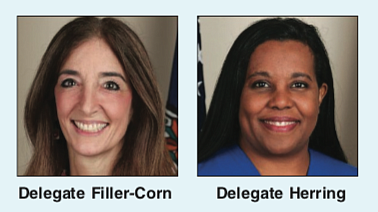 Fresh from sweeping enough seats in the Nov. 5 election to take the majority in the House of Delegates, Democrats plan to install two women in the top posts for the first time in state history.

Fairfax Delegate Eileen Filler-Corn, 55, who took over as House Democratic leader last year, fended off competi- tors to become the caucus’ choice for speaker of the House when the legislature reconvenes in January.

She will be the first woman and first Jewish person to hold the influential post.

Separately, Alexandria Delegate Charniele Herring, 50, who chaired the House Democratic Caucus during the past year, also overcame opposition to secure the No. 2 post of House majority leader. She will be the first woman and first African-American to hold the No. 2 spot.

The caucus also chose another Northern Virginian, Fairfax Delegate Rip Sullivan, to succeed Delegate Herring in what will be the No. 3 post of Democratic Caucus chair.

The election for caucus leadership positions, held last Saturday in Richmond, appears to reflect the increasing influence of women and African-Americans in the Virginia Legislature and the strength of the Northern Virginia delegation.

The 100-member House of Delegates will have 55 Democrats. The new House also is expected to include a record 29 women — one more than the 2019 session — including 23 Democrats and six Republicans, and also have a record 19 African-Americans, who will comprise one-third of the Democratic Caucus.

The Northern Virginia delegation will include a record 30 Democrats, or a majority of the party’s caucus and nearly one- third of the House.

The rise of women in House leadership attracted the most attention.

“I’m looking forward to standing up for the issues and values that are so important to Virginians,” Delegate Filler-Corn said. “And I look forward to working with every single member of the House of Delegates, Democrat and Republican, to move Virginia forward.”

A nine-year House veteran, Delegate Filler-Corn made history in 2019 when she became the first woman to lead a party caucus in the legislature.

On Wednesday, she named a 17-member transition team to be led by Wayne Turnage, former chief of staff to then-Gov. Tim Kaine, with government veteran Suzette Denslow to serve as staff director.

Delegate Luke Torian of Prince William County initially put his name into the contest, but did not compete.

Delegate Aird, who like Delegate Herring is a member of the Virginia Legislative Black Caucus, expressed pride in a Twitter statement in the support she received. She said the “outcome was disappointing,” but stated that her effort now makes it easier “for any young black woman that one day dreams of rising to leadership.”

Delegate Aird pledged to work with the speaker-designate.

Delegate Herring fended off a challenge from another VLBC member, Delegate Sam Rasoul of Roanoke, for the No. 2 post.

Henrico Delegate Lamont Bagby, chair of the VLBC, tweeted congratulations to Delegate Herring “on making history” in the year when Virginia marked the legislature’s first meeting in 1619 and “in the 35th year since the first black woman, the late Yvonne B. Miller, was elected to the Virginia General Assembly.”

“I could not be prouder of our members — both those celebrating re-election and those we are welcoming to the House for the first time,” Delegate Herring after the caucus vote.

“We have a lot of work to do and promises to keep, and I look forward to serving as majority leader in the first Democratic-led House in a generation,” she stated.

Democrats last held a majority of seats in the House and Senate in 1995.