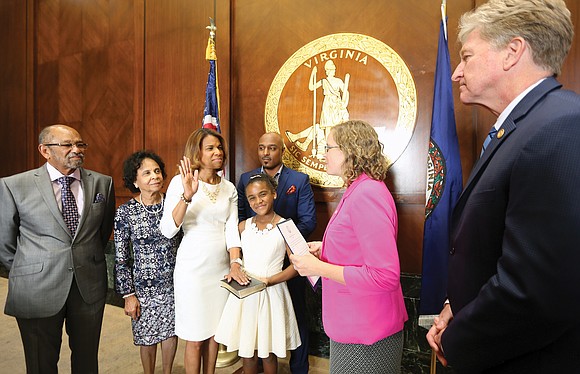 Kemba Smith Pradia, center, is sworn in as a member of the Virginia Parole Board on Sept. 26, by Kelly Thomasson, state secretary of the commonwealth, as her daughter, Phoenix, holds the Bible. Witnessing the ceremony are, from left, her parents, Gus and Odessa Smith; her husband, Patrick Pradia; and Brian Moran, state secretary of public safety and homeland security. Photo by Regina H. Boone

The appointment of Kemba Smith Pradia to the Virginia Parole Board by Gov. Ralph S. Northam is being cited as a courageous step by Virginia officials to right criminal justice system wrongs that targeted her generation.

Ms. Pradia, whose mandatory federal prison sentence of 241⁄2 years was commuted in 2000 to time served — 61⁄2 years — by former President Bill Clinton, may be the first former inmate to serve on the state Parole Board.

The 48-year-old from Henri- co County was a college student at Hampton University with no prior criminal record when she was arrested and convicted on federal drug charges. She became a national poster child for criminal justice advocates who contended her sentence as a first-time, nonviolent offender was a prime example of the federal government’s overreaction to the drug crime epidemic of the 1980s with mandatory minimum sentences and a disparity in sentencing between those caught with crack versus powder cocaine.

Ms. Pradia became a champion of federal sentencing reform, focusing on the thousands of first-time offenders arrested on federal charges and given harsh prison sentences.

Since her release, Ms. Pradia has aggressively campaigned from coast to coast with mixed results, advocating for Congress and various presidential administrations to curb harsh mandatory minimum federal sentencing laws. She has participated in White House meetings under former President Obama and by Trump Administration officials to discuss actions to address the minimum sentencing issue.

She also has been included in the yearly lineup of speakers at the Congressional Black Caucus Foundation’s fall gathering in Washington and has appeared at forums and events sponsored by various Greek-letter organizations, colleges and religious groups.

“It is an inspirational appointment,” said Hilary D. Shelton, director of the NAACP Washington Bureau and the national organization’s senior vice president for policy and advocacy.

He said Ms. Pradia has proven herself an eloquent spokeswoman and advocate for criminal justice reform from the halls of Congress to the world stage of the United Nations.

Ms. Pradia, who started work this week, stepped down as a state organizer with the Virginia ACLU to assume her new role. She is one of five parole board members, who traditionally have been attorneys. She is one of two part-time board members. She will work no more than 29 hours a week and pay at $59 per hour.

She replaces attorney Jean W. Cunningham, a former member of the House of Delegates who represented parts of Richmond and Henrico County, who had been on the Parole Board since January 2017 and was serving as its vice chair.

As a board member, Ms. Pradia will review and make decisions on parole applications for inmates locked up by the state prior to Jan. 1, 1995, when parole was abolished in Virginia. She also will work with her new colleagues to consider conditional geriatric release for older inmates and advise the governor, when requested, on executive clemency petitions.

“I’m up for the challenge,” Ms. Pradia said in a brief telephone interview.

“The part-time status allows me the flexibility do all the things I’m passionate about,” said Ms. Pradia, a busy wife and mother, a public speaker and head of a foundation she established to help first-time, nonviolent offenders and their families.

“We have a parole board that’s open minded,” said Adrianne L. Bennett, chair of the parole board. “I’m delighted to have (Ms. Pradia) on our team. The fresh prospective will enhance our effort to focus on providing second chances to those who’ve earned it,” said Ms. Bennett, an attorney who has served on the board since 2015.