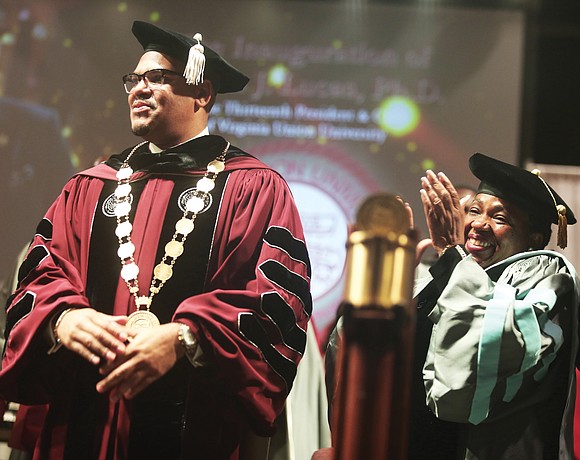 Dr. Hakim J. Lucas is applauded by an audience of hundreds and his mother, Bishop Barbara Austin Lucas, during his inauguration as Virginia Union University’s 13th president during a ceremony Oct. 17 at the Greater Richmond Convention Center. Bishop Lucas is founder and senior pastor of Agape Tabernacle International Fellowship in Brooklyn, N.Y. Photo by Regina H. Boone

Dr. Hakim J. Lucas was inaugurated as Virginia Union University’s 13th president last week in an event that recognized and honored the historic institution’s past and future.

“Today you witness an inauguration, but tomorrow I will witness yours,” Dr. Lucas addressed the students who sat among the audience of hundreds that included elected officials, VUU faculty and staff and representatives from col- leges and universities up and down the East Coast.

The university traces its roots to 1865, just after the end of the Civil War, when representatives from VUU’s founding organization, the American Baptist Home Mission Society, came to the former Confederate capital as missionaries and teachers to the formerly enslaved population. Some of the early classes were held in Lumpkin’s Jail, a former slave holding pen, in Shockoe Bottom.

Through growth and mergers, what is known as Virginia Union University emerged in 1899 on its current tract on Lombardy Street.

The university’s nationally recognized graduate theology school, the Samuel DeWitt Proctor School of Theology, was launched in 1942 and has produced theologians and preachers of great renown across the nation.

The university counts among is noted alumni L. Douglas Wilder, the first African-American elected governor in the United States; Eugene Kinckle Jones, a founder of Alpha Phi Alpha Fraternity; Admiral Samuel Gravely, the Navy’s first African- American admiral; and Methodist Bishop Leontine T.C. Kelly, the first woman of any major denomination to be consecrated as a bishop, who later served four terms in the Ohio legislature.

At the inauguration, several speakers lauded Dr. Lucas as continuing VUU’s mission to transform the lives of its students and develop future leaders.

According to the State Council of Higher Education, VUU had a fall 2018 total enrollment of 1,560 students, including 375 graduate and professional students. That is down from a total of 1,906 in fall 2015.

Dr. Lucas, 42, was inaugurated a full two years after taking the reins as president and chief executive officer on Sept. 1, 2017. The ceremony, filled with maroon and steel pageantry with the school’s colors, was part of a weeklong celebration that culminated with the university’s homecoming.

“It’s a big celebration and it makes it official that he is our university president,” said VUU spokesperson Pamela Cox.

Dr. Lucas has nearly two decades of experience in higher education in the areas of fundraising, strategic planning and the engagement and retention of students at historically black colleges and universities. He served as vice president for institutional advancement at Bethune-Cookman University in Florida before coming to Richmond.

At VUU, he succeeded former President Claude G. Perkins, who stepped down in June 2016 for a yearlong sabbatical before retiring. Dr. Joseph F. Johnson, a VUU vice president, served as acting president in the interim.

So far during his tenure, Dr. Lucas has overseen multiple new initiatives at VUU, including a dual bachelor’s degree program for engineering and science majors with Virginia Commonwealth University, a health services clinic operated in partnership with the Capital Area Health Network and a new scholarship program for promising ninth-graders from Richmond Public Schools as part of its “VUU is RVA” initiative.

Dr. Lucas is “driven, he is focused and he has a deep commitment to social equity, to social justice,” Dr. Michael Rao, president of VCU, told the audience.

He called Dr. Lucas a “tremendously positive spirit,” delivering “the promise of a limitless future” to the next generation.

In that vein, Dr. Lucas announced during his remarks that full scholarship offers have been made to 50 students at Washington Heights Middle School, a free public charter school in Brooklyn, N.Y. The students must graduate from high school with at least a 3.0 GPA to take advantage of the offer.

As a group of students from the middle school stood among the audience to be acknowledged, the exhibition hall echoed with the sound of applause.

“If you meet the standard held high above your head,” Dr. Lucas told them, “there’s a place where you will grow and you will learn how to wear your crown.”

Dr. Lucas has ties to the New York area. He served as dean of institutional advancement and development at Medgar Evers College in Brooklyn, N.Y., where he also had been a tenured lecturer and deputy chair of the philosophy and religion department.

Dr. Lucas’ time at VUU has been marked by a number of controversies. In 2018, five months after his hiring, Bethune-Cookman University filed a lawsuit against Dr. Lucas, alleging that he and other officials defrauded the Florida college in an exorbitantly expensive dorm construction project that may wind up costing the school more than $300 million.

Dr. Lucas has disputed the allegations and called for the suit’s dismissal.

Dr. Lucas’ nomination generated heat, in part, because he had openly expressed his support of the project in an opinion piece published last year in Richmond’s daily newspaper that was signed by Dr. Lucas and Virginia State University President Makola M. Abdullah. It was later revealed that the piece was written by the development company’s public relations consultant.

Still, aspects of the inauguration took on new weight.

Wiley College President Herman J. Felton Jr., who recalled past college leaders such as VUU’s fifth president, Dr. Samuel DeWitt Proctor, urged greater support and collaboration among HBCUs to build a better future while mitigating the harm of “internal vitriol spewed by us, against us.”

“While we cannot control the unhappy folk who wish to destroy our institutions and our reputations,” Dr. Felton said, “we can control our space ... Our institutions are sacred and should be cared for as such.”

Referencing the words of U.S. Representative Elijah Cummings of Maryland, who died earlier that day, Dr. Charles R. Whitfield, president of the Virginia Baptist State Convention, expressed hope that “pain, passion and purpose” will lead VUU to a “new legacy of laughter, love, listening and stellar leadership,” not just for Dr. Lucas, but for those still to come.