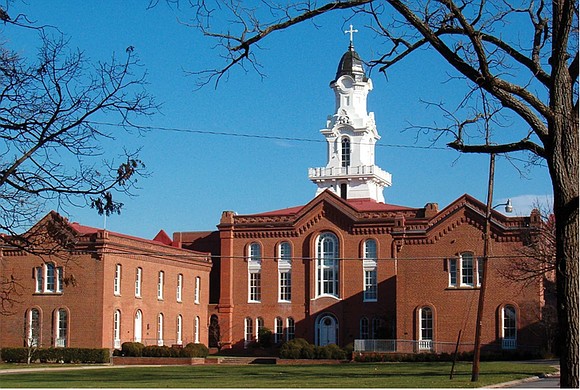 Aspinwall Hall at Virginia Theological Seminary was one of three buildings on campus built by slave labor. Photo by John W. Cross/Creative Commons

An Episcopal seminary in Alexandria has announced plans to create a $1.7 million endowment fund whose proceeds will support reparations for the school’s ties to slavery.

Virginia Theological Seminary said in a statement issued Sept. 5 that enslaved persons worked on its campus and the school “participated in segregation” after the end of slavery.

“This is a start,” said the Very Rev. Ian S. Markham, president of the Alexandria-based seminary, in the statement. “As we seek to mark (the) Seminary’s milestone of 200 years, we do so conscious that our past is a mixture of sin as well as grace. This is the Seminary recognizing that along with repentance for past sins, there is also a need for action.”

A spokesman for the seminary said officials know of three buildings on its campus that were built with slave labor, including Aspinwall Hall, where the dean’s and admissions offices are located.

“We do want to honor those who worked in this place and we want to provide financial resources for their descendants,” said Curtis Prather, the seminary’s director of communications. “The Office of Multicultural Ministries will take the lead in the exhaustive research that will need to take place.”

The seminary, which was founded in 1823 but admitted its first African-American student in 1951, raised the funds for the endowment with a capital campaign. School officials estimate that they will spend $70,000 annually from accumulated interest on reparations.

The seminary intends to determine with stakeholders how the income from the endowment fund will be distributed. It said some of the money would be allocated to descendants of enslaved persons who worked at the seminary and to assist the work of African-American alumni, especially those involved with historic black churches.

It also plans to encourage African-American clergy in the Episcopal Church and support programs that promote inclusion and justice.

“Though no amount of money could ever truly compensate for slavery, the commitment of these financial resources means that the institution’s attitude of repentance is being supported by actions of repentance that can have a significant impact both on the recipients of the funds, as well as on those at VTS,” said the Rev. Joseph Thompson, director of the seminary’s Office of Multicultural Ministries, in a statement.

“It opens up a moment for us to reflect long and hard on what it will take for our society and institutions to redress slavery and its consequences with integrity and credibility.”

The decision comes as other institutions of higher learning, some with ties to religious organizations, have mulled whether to offer forms of reparations.

In 2017, Georgetown University apologized for its involvement in the 1838 sale of more than 270 enslaved persons that kept the Catholic-run school from bankruptcy. The school renamed two buildings that once honored former university presidents who were priests and supporters of the slave trade. A year earlier, Georgetown announced that it would give preferential status in the admissions process to descendants of the enslaved people who had been owned by Maryland Jesuits.