Daily Planet marks 50 years of vital service to the community 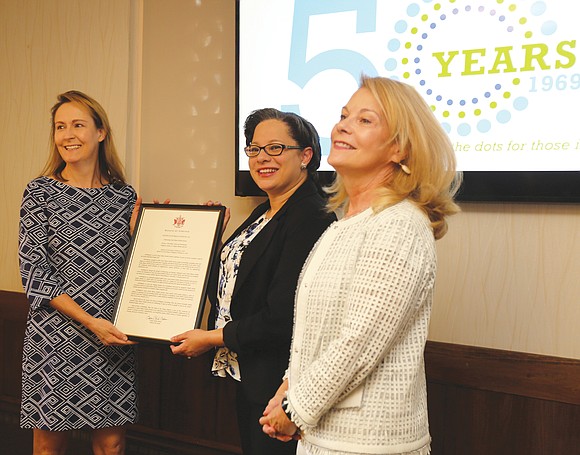 In 1969, concern about an epidemic of runaway and disaffected teens led to the creation of an organization offering a caring place with shelter, meals, health clinics and counseling without judgment.

When the young clients were asked to name the organiza- tion, they came up with the Daily Planet, after the fictional newspaper where Superman’s alter ego, Clark Kent, works.

As described on the website, the young people felt that they had entered a transforming place analogous to the trans- formation of Clark Kent into Superman.

The name has stuck.

While its service focus is now mostly on homeless and mentally ill adults, the Daily Planet, based at 517 W. Grace St., is still going strong as it marks 50 years of service to the community.

It has become a health safety net, best known now for providing health care regardless of an individual’s ability to pay.

The Daily Planet’s golden anniversary celebration was typical of an organization that provides crucial social services with little fanfare.

Instead of a big, pricey fundraising gala, the organization celebrated by opening an exhibit at the University of Richmond Downtown of photographs taken by seven of their clients who were given inexpensive cameras and asked to take pictures of the world from their viewpoint.

Among the photographers was Jennifer Orishak, 52, who considers the Daily Planet a lifeline where she can go for medical care and counseling. Homeless and unemployed, she said the applause she received for her photography work at the exhibit opening was unexpected and unusual.

“It’s not something I get a lot of,” she acknowledged.

Ms. Orishak said she is grateful for the Photovoice exhibition for which the Daily Planet received a grant to undertake. She said it allowed her to offer a glimpse of her world, including the woods where she and others live in tents during the winter.

Ms. Orishak and many others rely on the Daily Planet. In a given year, Daily Planet’s headquarters serves about 7,500 men, women and children regardless of their status, ranging from primary medical and dental services to mental health counseling and case management.

On its website, the Daily Planet states: “ALL citizens should have access to quality health services regardless of their financial, housing or insurance status. Our philosophy is that health care is a right for all and not a privilege for the few.”

That philosophy means a lot of uncompensated care — $2.5 million in 2018 alone for an organization that operates on a $7 million annual budget.

As part of its services, the organization also operates two niche shelters. One is a 20-bed medical respite space that provides homeless adults who are discharged from the hospital a place to recuperate from surgery and other medi- cal procedures.

The other is a 21-bed transitional housing facility on South Side, called Safe Haven. It offers homeless adults with mental health or substance abuse disorders or who are living with HIV/AIDS a place to stay and receive integrated support services as they work to regain their independence.

The exhibit, “Photovoice: Addressing Stigma Against People Experiencing Homelessness,” will be on display through Nov. 26 at the University of Richmond Downtown, 626 E. Broad St.