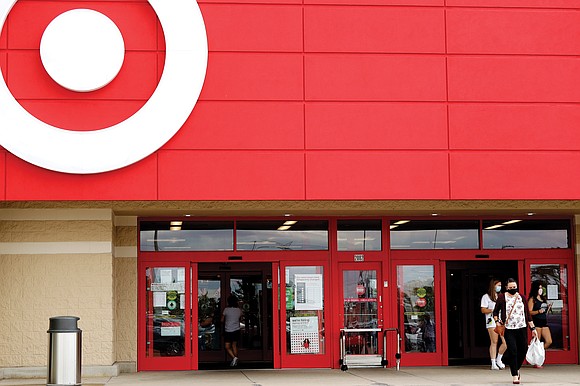 Shoppers wear face masks while leaving a Target store in Niles, Ill. Target announced that it will close its stores Thanksgiving Day as it continues to adjust amid the coronavirus pandemic. Photo by AP Photo / NamY. Huh

NEW YORK - Forget about rushing out this year on Thanksgiving Day to get a jump on Christmas shopping.

The move, announced July 27, comes as stores are rethinking this year’s Black Friday shopping bonanza weekend— along with other key retail days during the holiday season—as the country battles the coronavirus pandemic.

Stores always depended on big holiday crowds and work as much as a year in advance with manufacturers on securing exclusive items. Now, the virus has turned the holiday shopping model upside down. Stores have slashed orders and crowds are an anathema.

With fears of a wave of virus cases in the fall, the biggest nightmare would be if retailers had to re-close during the most critical time of the year, analysts said.

“Historically, deal hunting and holiday shopping can mean crowded events, and this isn’t a year for crowds,” Minneapolis-based Target said in a corporate blog posted. It said its holiday deals would come earlier than ever—starting in October.

Walmart, the nation’s largest retailer, announced its move earlier. Target opened for the first time on Thanksgiving in 2011, joining other stores in starting Black Friday sales a day early and creating a new tradition of shoppers heading out to the stores after their turkey feast. Many retailers did so because they were trying to better compete with Amazon and other online players.

But sales ended up eating into Black Friday and many critics lambasted stores for not honoring the holiday and allowing their workers to spend it with family.

In response to the backlash and also to poor sales, some stores and malls like the Bloomington, Minn.,-based Mall of America, reversed course and have not opened on Thanksgiving in recent years.

Costco and Nordstrom, among others, have always remained closed on Thanksgiving, noting they want to respect the holiday.

The bigger question still looms on how to handle Black Friday itself, which also draws huge crowds and sales. Despite competition from Thanksgiving shopping, Black Friday ranks as either the top or No. 2 sales day of the year.

Thanksgiving is not even in the top 10 because sales start around 5 p.m. But the day ranked third in online shopping behind Cyber Monday and Black Friday respectively last year, according to AdobeAnalytics, which tracks online sales for 80 of the top 100 retailers.

Walmart and Target declined to comment on their plans for Black Friday, but analysts say they believe the retailers will pivot their business more online and focus on limiting the number of shoppers in stores. Like Target, other retailers also will likely start holiday sales even earlier to stretch out crowds.

Macy’s CEO Jeff Gennette said earlier in July that the department store will be pivoting its Black Friday business more toward online and will likely be going “full force” with holiday marketing right after Halloween. It also will be staggering events to reduce customer traffic in the store.

Still, pushing sales further online will likely be more costly for retailers because of shipping expenses. And while many stores like Macy’s will ramp up curbside pickup for the first time this holiday season, that strategy will create logistical challenges to meet shoppers’ holiday demands.

Sucharita Kodali, an e-commerce analyst at Forrester Research Inc., said that the profit margins retailers get on their online sales are anywhere from 50 to 80 percent of what they get when the same item is bought in the store.

“This is going to be a very tough holiday season in terms of where sales are going to come from,” said Joel Rampoldt, a managing director in the retail practice at AlixPartners.