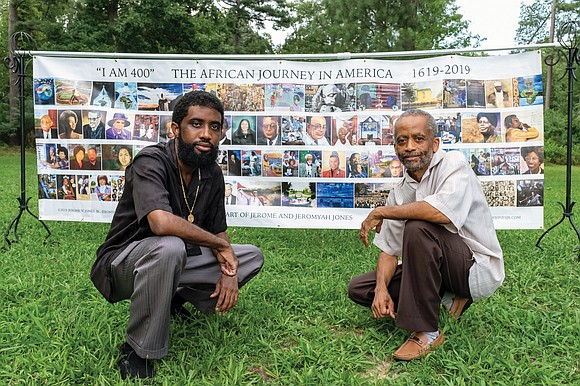 Artists Jeromyah Jones, left, and his father, Jerome W. Jones Jr., display their “I AM 400” banner outside at Pine Camp Cultural Arts and Community Center. It shows many seminal events and people in African-American history during the last 400 years. Photo by Sandra Sellars

Local artists Jerome W. Jones Jr. and Jeromyah Jones, known for their portraits of prominent figures, received a tidal wave of interest from across the country after a recent interview on NBC’s “Today” show.

The father-son team shared the national spotlight during a virtual morning interview July 31 with “Today” show host Craig Melvin as part of the series “Dads Got This!” The series spotlights fathers across the country who are making a difference in their children’s lives.

Mr. Melvin, who was doing the show from his Connecticut home, interviewed the Joneses, who were in their Richmond studio. He learned about their careers and got a taste of poetry about their years of portrait art celebrating Black history and culture.

Since then, the Joneses have been receiving calls from across the country from people inter- ested in their work, notably their “I AM 400: The African Journey in America, 1619-2019” banner that highlights the trials and tribulations, successes and achievements of African-Americans from 1619 to 2019.

“It was a blessing to get national exposure for our artwork. That was awesome,” father Jerome Jones, a landscape and still-life painter, told the Free Press last week.

“Our success is ongoing. People from across the nation, who were as impressed with our artwork as Mr. Melvin was, have been calling to purchase a copy of the ‘I AM 400’ banner.” The Joneses’ work, centered in their inspirational foundation and rooted in their religious beliefs, focuses on Africa and weaves together the past, present and future and tells stories that are personal and universal.

The artists premiered the banner in conjunction with the 400th anniversary of the arrival of the first enslaved people in America. The 69 portraits on the banner include many familiar and renowned local and national figures in civil rights, medicine, sports and entertainment, including Arthur Ashe Jr., Dr. Martin Luther King Jr., Dr. Wyatt Tee Walker, Oliver W. Hill Sr., Dr. Francis Foster, Serena Williams, Wynton Marsalis, Stevie Wonder, Shirley Chisholm and Dr. Dorothy Height. All have contributed to the character and culture of America throughout the centuries.

“The response was amazing,” said Jeromyah Jones, who specializes in oil and acrylic painting.

During the interview with Mr. Melvin, the younger Mr. Jones read his poem, “I AM 400,” that accompanies the banner.

“So many people locally said they were moved by my poem, just like Mr. Melvin.” The national television host was brought to tears during the segment.

For Jeromyah Jones, their work is a statement of their belief in scripture, Proverbs 18:16 — “A man’s gift opens doors for him, and brings him before great men.”

Copies of the “I AM 400” banner have been installed in the Richmond Public Library, as well as at schools and universities around the state, including Virginia Union, Hampton and Virginia Commonwealth universities and the College of William & Mary.

It also has been installed at the August Wilson African American Cultural Center in Pittsburgh, National installations include Pittsburgh’s August Wilson Center, the Charles R. Drew University of Medicine and Science in Los Angeles, the Medical College of Wisconsin in Milwaukee and the Boys & Girls Clubs of Metro Atlanta, to name a few.