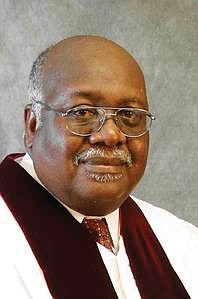 Dr. Andrew Monroe Mosley Jr., who served as pastor of Quioccasin Baptist Church in Henrico County for three decades during his 52-year ministry career, has died.

His life was celebrated during a funeral service Saturday, Nov. 7, at the church.

Retired from Quioccasin Baptist in 2015 after 32 years, Dr. Mosley’s legacy continues in the form of a multipurpose

facility he led the church in building in 2004. The facility, which includes banquet and meeting space for 400 people and a basketball court, was renamed the Andrew M. Mosley Jr. Enrichment Center in October 2017.

During his tenure at the 154-year-old church, he was credited with adding ministers to serve young and old and building up the stewardship and mission ministries.

At the same time, he was active in Baptist groups both locally, regionally and nationally.

Dr. Mosley was a past president of the Baptist Ministers’ Conference of Richmond and Vicinity and of the Henrico Ministers’ Fellowship and a former moderator of the Tuckahoe Baptist Association.

He also was a former chairman of the Baptist General Convention of Virginia’s Commission on Evangelism and also chaired the Africa Working Committee of the Board of International Ministries of American Baptist Churches USA.

Outside of church, he was a past chairman of the board of the Richmond Opportunities Industrialization Center and served on the boards of Housing Opportunities Made Equal and the Educational Foundation of Henrico County.

The son of a minister, Dr. Mosley began his ministry career in 1960 when he was licensed to preach at Green Street Baptist Church in his birthplace, Selma, Ala.

During his career, he also led churches in Alabama, Chicago and Covington, Va.

He also was a believer in education.

He earned his first bachelor’s degree in philosophy and religion from Knoxville College and later earned a second bachelor’s in theology from Selma University.

In 1972, while serving as pastor of New Bethel Baptist Church in Dothan, Ala., he began a bus commute to Virginia Union University’s School of Theology. For three years until he earned his master’s in divinity, he would take the bus to Richmond on Monday, take classes through Friday, and return by bus to Dothan to see his family and prepare for services.

He continued commuting for education after being called in 1975 to lead First Baptist Church in Covington.

While there, he regularly traveled to Washington to study for his doctorate in ministry, which he earned in 1982 from Howard University’s School of Theology, the same year he was called to the pulpit at Quioccasin Baptist Church.