Navy Hill developers who were rejected in Richmond plan to build a bigger development with a new 17,000-seat arena off Parham Road in Henrico County 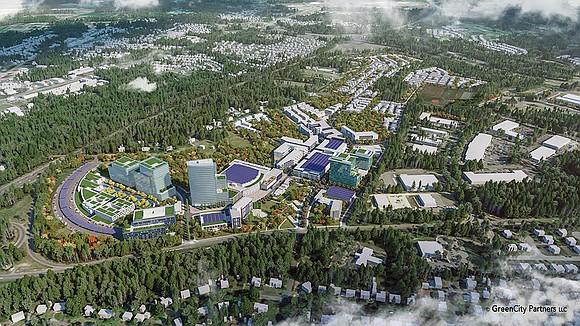 This rendering offers a view of the proposed $2.3 billion GreenCity development in Henrico County that would include a 17,000-seat arena. The 250- acre site, currently owned by the county, fronts East Parham Road and abuts interstates 95 and 295 about 4 miles north of the city line. Illustration courtesy of GreenCity Partners LLC

Richmond is about to lose its title as the region’s entertainment capital.

A replacement for the closed Richmond Coliseum in Downtown is now almost certain to be developed in Henrico County, accompanied by a potential $2.3 billion, environmentally friendly office, retail, hotel and housing development.

Under the GreenCity plan unveiled Tuesday with the backing of the county’s top administration official, a 17,000-seat arena for touring concerts, sports and other big events would be a centerpiece of the massive development that could include 2,400 homes envisioned for the long dormant county-owned real estate.

Location: A 250-acre parcel on East Parham Road purchased by the county in 2011 that once housed the headquarters of now-defunct Best Products.

The site, for which the developers would pay $6.2 million — the same amount as the county paid — is about a mile east of Brook Road and sandwiched between interstates 95 and 295.

If it sounds like the proposed Navy Hill development that Richmond City Council shot down a year ago, that’s because it is a revamped version by the same architectural, planning and development team that was behind the city plan, William Hallmark and Susan Eastridge.

The size of the property — more than 12 times as large as the 20 acres or so that the team proposed to develop near City Hall — is expected to make it easier to pay off the debt associated with a planned $250 million arena with the taxes the new buildings are expected to generate once everything is constructed. Real estate taxes alone are projected to generate more than $20 million a year if everything is built.

That’s a big difference from the $1.5 billion Coliseum proposal and Downtown development that City Council turned down. That plan would have required the city to pay off the arena using projected increases in real estate taxes generated by existing Downtown properties. For Henrico, the project is seen as paying for itself. 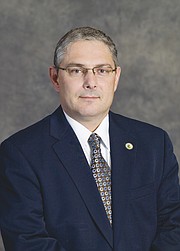 “We are thrilled to endorse this bold, visionary opportunity as it is in sync with everything that Henrico County stands for and has been working hard to achieve — inclusion, resiliency, mobility, innovation and job growth,” County Manager John A. Vithoulkas stated.

“The arena will put this region back on the entertainment map,” he stated, given that all of the venue’s cost is to be paid for from taxes that would not exist except for this project.

In addition, he stated, “We’re talking about a new kind of community that is intricately planned, inclusive for all and thoughtfully designed to be not only livable but also to set new standards for environmental sustainability.

“GreenCity will be a community that preserves, embraces and showcases open space, and it will drive economic development and tourism in new and exciting ways.”

The address of the old headquarters for the now-defunct Best Products off of East Parham Road in Henrico County is 1400 Best Plaza Drive. The county paid $6.2 million for the land in 2011 and would sell to developers of the proposed GreenCity development for the same amount.

Envisioned as an “ecodistrict,” GreenCity would be designed around principles that promote environmental sustainability, civic engagement and inclusion, according to the county. Unlike the rejected city proposal, no mention was made in the Henrico proposal about the inclusion of Black and minority contractors.

As envisioned by Mr. Hallmark, the development would integrate extensive parks, trails and open spaces among about 2 million square feet of office space, 280,000 square feet of retail space, 2,400 housing units, two hotels and the arena.

The lone building on the site, the old Best Products headquarters with its iconic Art-Deco eagle statues, would be renovated and repurposed as an environmental showpiece that produces zero waste.

The developers anticipate a formal submission of plans and an application for rezoning in early 2021.

In anticipation of those filings, the Henrico County Board of Supervisors is scheduled to vote on transferring the land to its Economic Development Authority for sale to the GreenCity operation for the $6.2 million that the county paid.

As part of the deal, the county would create a community development authority, or CDA, to sell bonds to pay for the arena and provide for repayment over 30 years using the stream of tax revenue the development would generate.

“In Henrico, we have extensive experience with CDAs,” Mr. Vithoulkas stated. “CDAs have been used successfully in the development of the Short Pump Town Center, White Oak Village and Reynolds Crossing. Each of these projects either met or exceeded its revenue targets, and each now makes significant tax contributions that help us fund schools, public safety and other core services.”

Separately, the Hallmark-Eastridge team has returned to Richmond with a $350 million proposal to replace the old Public Safety Building near City Hall with a new office building for Virginia Commonwealth University that also would include new housing space for the Ronald McDonald House and the Doorways, both of which serve visiting relatives of hospitalized patients.