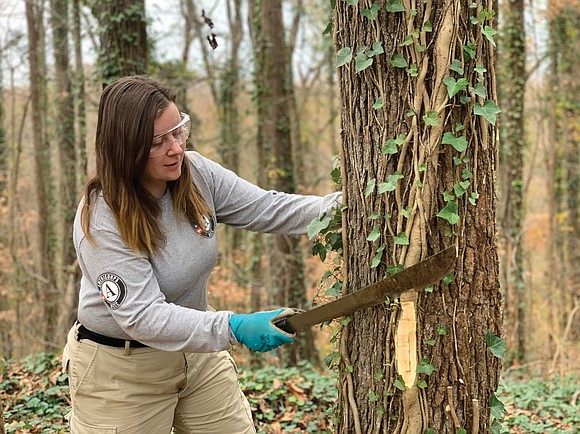 Julia Bina of Minnesota uses a machete to cut a large vine wrapped around a tree in Evergreen Cemetery. Ms. Bina leads a group of nine young people with the AmeriCorps National Civilian Community Corps who have been working since Thanksgiving to help clear vegetation and overgrowth from the historic cemetery. Photo by Jeremy Lazarus

Drive into historic Evergreen and East End cemeteries, and it is immediately evident that the 12 years of restoration work is paying off.

The vines, weeds and other overgrowth is gone from large areas of the neighboring African-American cemeteries that date to the 1890s.

Instead of the mowed lawn look of modern cemeteries, these are more naturalistic places, with the headstones and marked graves — some elaborate and others modest — clearly visible and large, open pathways.

Of course, it helps that it is winter, and vegetation that grows quickly in the summer is no longer active.

Nearly half of Evergreen’s 60 acres appears to have been cleared as does most of East End’s 16 or so acres.

Located off Stony Run Parkway, the private Evergreen and East End cemeteries straddle the border between Richmond and Henrico County, just north of the city-owned and operated Oakwood Cemetery that dates to the late 1870s.

The most active effort to reclaim the two cemeteries dates to around 2008 when John Shuck, a retired bank performance analyst, took on the mission of restoring these cemeteries. Mr. Shuck, along with a number of regular volunteers, is now involved with other neglected Black cemeteries in Metropolitan Richmond.

The restoration work continues despite the pandemic, said John Sydnor, executive director of Enrichmond Foundation, owner of both burial grounds that are the resting places for many celebrated individuals such as businesswoman and community organizer Maggie L. Walker, fiery newspaper editor and banker John Mitchell Jr., school leaders and church founders.

One example of the ongoing effort involves a team of nine young people from the National Civilian Community Corps, an arm of the federal AmeriCorps program. Since Thanksgiving, the team led by Julia Bina of Minnesota has cleared large amounts of vegetation in Evergreen and also documented the graves found in the cemetery’s digital database that is available to families and the public.

The team completed its stint at the cemeteries last week, but more may come. Mr. Sydnor said Enrichmond has applied to secure more crews through AmeriCorps next year.

Then there is the Chainsaw Crew, a group of about nine people who regularly work to remove trees and other large vegetation growing up around gravesites.

“A lot has been accomplished,” Mr. Sydnor said, “but this is a long process. Onward and upward.”