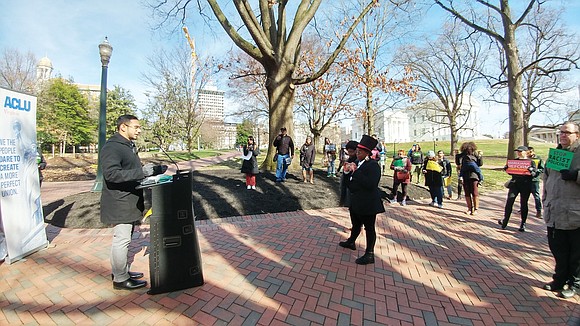 Around 30 people called for the full decriminalization of marijuana during a rally in Capitol Square last Saturday, challenging a Democrat-sponsored bill that they said would lead to continued disproportionate arrests of people of color.

Ms. Wise was joined by members of Marijuana Justice, the American Civil Liberties Union of Virginia and other advocates of reforming the state’s marijuana possession laws, including Sheila Bynum-Coleman of Chesterfield County, a former member of the Virginia Board of Contractors, and Delegates Joshua G. Cole of Stafford County and Dr. Ibraheem S. Samirah of Fairfax County.

Many speakers criticized a marijuana bill sponsored by Delegate Charniele Herring of Alexandria and supported by Gov. Ralph S. Northam that Democratic leaders have pushed as a key part in decriminalizing marijuana usage. But advocates said it will continue to criminalize simple possession with a maximum $25 fine. While it would reduce the current maximum penalty of 30 days in jail and a $500 fine, it also would allow young people to be charged as juvenile delinquents, with mandatory drug tests and a six-month suspension of their driver’s licenses.

“We’re passing decriminalization bills that simply don’t meet the full scale of the problem,” Delegate Samirah told the small group at the rally. “They don’t solve the problem that we have here, which is the targeting of people of color, of poor people, of marginalized groups.”

Ms. Bynum-Coleman added personal testimony about the humiliation she said her family has suffered repeatedly from police officers who use the pretense of smelling marijuana to subject them to strip-searches and harassment, even as they find no evidence of marijuana.

“This is a tool to invade the privacy of black and brown people,” Ms. Bynum-Coleman said. “We are sent to prison more than white people for doing the same things.”

The advocates are putting their support behind a bill sponsored by Sen. Adam P. Ebbin of Alexandria, that was developed through collaboration with equity advocates. It would raise the decriminalizing threshold from a half ounce to one ounce of marijuana and provide a civil penalty of no more than $50 or five hours of community service. The bill would also identify any juvenile possessing marijuana as a “child in need of services,” without any delinquency charges that are included in Delegate Herring’s bill.

Speakers acknowledged the limitations with Sen. Ebbin’s bill, namely the civil penalties, that kept it from fully opening the door to true racial equity.

A third marijuana bill, introduced by Delegate Jennifer Carroll Foy of Prince William County and supported by equity advocates, would have fully legalized marijuana use with no penalties for possession, but it failed to pass the House of Delegates.

To ensure whatever bill reaches Gov. Northam’s desk does the least harm, speakers encouraged those present to spread the word and to contact their legislators to urge them to amend both bills to repeal the penalties for simple marijuana possession and to remove the delinquency charge in Delegate Herring’s bill.

Speakers at the rally also voiced support for a bill sponsored by Sen. Jennifer L. McClellan of Richmond that would establish anindependent study into legalizing and regulating the growth, sale and possession of marijuana. This measure, speakers said, is key to ensuring the potential financial benefits from marijuana decriminalization are enjoyed by people throughout the Commonwealth, instead of creating a market dominated by a select few.

“You all have such power to hold our lawmakers account- able,” said Ashna Khanna, legislative director for the ACLU of Virginia. “It’s ‘We the people.’ They represent you all. They should be doing what’s best for you all.”