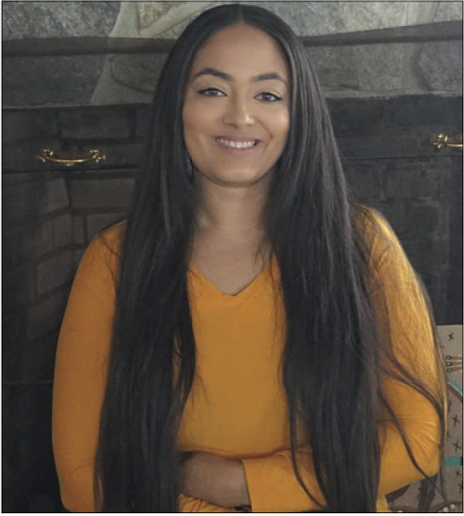 Jasmine N. Anderson, seen here in her Essex County home, has amassed a voluminous file of documents, photos and other information in her five-year quest to prove her direct descent from Pamunkey ancestors. Photo courtesy of Jasmine N. Anderson

The Pamunkey Indian Tribe’s fight in the General Assembly for the right to build gambling casinos in Richmond and Norfolk is shining a renewed spotlight on the tribe’s use of racial bigotry to ensure its survival.

The tribe’s history of white supremacist policies and practices — though sharply disputed by tribal Chief Robert Gray — have largely flown under the radar during this session of the General Assembly and went almost unnoticed during the tribe’s long years of applying for federal recognition.

According to documents the Free Press has obtained, the Pamunkey enacted “Black Laws” that mirrored Virginia laws to suppress African-Americans. The tribe did it to fend off efforts from hostile white neighbors to push them off their 1,200-acre reservation in King William County.

Beginning in 1861 as the Civil War started, the tribe passed an internal law authorizing the banishment of any member whose family was connected in any way with African-Americans.

The racial cleansing was almost essential for the tribe, which supported the Union. Like other Virginia Indians, the Pamunkey were almost wiped out between 1924 and 1975 when the state refused to recognize Indians as a separate ethnic group and classified them as African-Americans.

During World War II, members of the Pamunkey and other Virginia tribes fought against being drafted if they were to be assigned to African-American units in the racially segregated military. As was the case in World War I, they would agree to be assigned only to white units.

Still, even after the state’s Racial Purity Law was repealed in 1975, the Pamunkey kept on its books its law banning interracial marriage.

The tribal law stated that “No member of the Pamunkey Indian Tribe shall intermarry with any other person other than those of white or Indian blood” and prescribed forfeiture “of their rights as members of the tribe” for violators. That “Ordinance of the Pamunkey Indian Reservation” remained intact until August 2014, according to U.S. Department of the Interior records, or nearly 50 years after the U.S. Supreme Court struck down Virginia’s ban on interracial marriage.

The federal government required the tribe to repeal the ordinance as part of gaining federal recognition in January 2016. Prior to repeal, the Congressional Black Caucus raised concern about official recognition for a tribe with such a racist law, but was overruled.

Virginia’s two U.S. senators, Tim Kaine and Mark Warner, who both championed federal recognition of the Pamunkey and other Virginia tribes during their tenures as governors and on Capitol Hill, said in statements they were unaware of the tribe’s history in relation to African-Americans.

Gov. Ralph S. Northam’s office did not respond to a request for comment on the history of the tribe, which has long been part of the Virginia Council on Indians.

A 38-year veteran of a fully integrated Air Force, Chief Gray said he found it “offensive” that anyone would consider the tribe to be racially bigoted. He said the so-called Black Laws “were not enforced” and are akin to the array of unconstitutional state laws promoting white supremacy that the General Assembly finally and officially eliminated from the state legal code during the current session.

Although the tribe has never issued a public apology for the Black Laws, Chief Gray said the best evidence of the tribe’s outlook is the fact that tribe’s current membership rolls include several with African-American spouses and also lists their children as members.

Jasmine N. Anderson has a cousin who lives on the tranquil 1,200-acre Pamunkey Reservation nestled on the banks of the Pamunkey River in King William County.

The exposure of the tribe’s racist past is largely the work of 30-year-old Essex County resident Jasmine N. Anderson, who has spent more than five years quietly working to gain recognition for herself and her relatives. They are members of the Dungee family that was banished from the tribe between 1865 and 1871 after a member opened a free school for newly freed slaves near the reservation.

That includes her six-times great-grandfather, Joseph Dungee Jr., and his brother, Jesse Dungee (also spelled Dungey and Dungy), a farmer and minister who represented King William County in the General Assembly from 1871 to 1873, and gained recognition as both a Pamunkey and as an African-American legislator.

Despite amassing church rolls, 19th century census records and other documents to prove her Pamunkey tribal lineage and that of her relatives, Ms. Anderson’s applications — three since 2015 — have been rejected by Chief Gray and the tribal council.

She noted that a cousin, John Collins, who lives on the Pamunkey reservation, was assaulted after he spoke in support of recognition for Ms. Anderson and her family, and was told by his attacker that he should drop his efforts to bring “n......s” back to the reservation.

While most Virginia elected officials have ignored concerns about Pamunkey action to ex- clude her family, Ms. Anderson has garnered support from Wisconsin Congresswoman Gwen S. Moore, a member of the Congressional Black Caucus, who has urged the tribe to end its blockade of Ms. Anderson’s admission to the tribe.

“I am confident that we share the goal of seeing the ugly history of the Pamunkey Black Laws truly put to rest so that the Pamunkey Tribe and all its people can move into a prosperous future,” Rep. Moore wrote to the tribe in June.

Congresswoman Moore also has instituted an inquiry with the federal Bureau of Indian Affairs about the situation.

Chief Gray said the tribe’s decision to block Ms. Anderson stems from the membership requirements, which include being noted on the 1900 or the 1910 Census.

He said the federal government requires tribes to set up clear membership criteria that prevent wannabes who may have some ancestral connection from inclusion. The tribe now lists about 400 people as members.

He said Ms. Anderson, despite her documents, cannot show that her family was listed as Indian on those two critical censuses.

According to Congresswoman Moore, that contradicts a promise made by Pamunkey Assistant Chief Brad Brown in August 2017 in which he stated the tribal council would “consider for membership” someone who presented compelling evidence of being descended from “a Pamunkey who lived on the reservation prior to 1900.”

“My family and I are proof that the legacy of the (tribe’s) racist past lives today and is intended to be perpetual,” she said. “The use of the 1900 and 1910 censuses as immutable base rolls is inherently racist because it is designed to exclude those Pamunkey Indians who were expunged from the rolls” before those censuses, she said.

She stated that the similar Virginia anti-intermarriage law that was struck down in the 1967 Loving case only called for punishment for the parties to a marriage.

“The tribe’s banishment punished all generations to come,” Ms. Anderson said. “I firmly believe my ancestors’ efforts to help people of color in the 1860s is the reason for my banishment today.”