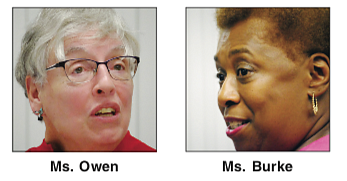 The Richmond School Board has two former educators leading the board for 2020.

In a call for more board transparency and accountability, Dr. Sapini said, “I cannot support the election of the chair or vice chair.”

He did not elaborate. Dr. Sapini is a former vice chair of the School Board.

“I accept this position with humility and I hope moving forward that I will do the job ... with the best possible outcome for the students and teachers,” Ms. Owen said following the vote. “I know my colleagues are working with the good of children in our hearts.”

The change in leadership comes at a time when all nine School Board seats will be up for election in November. Ms. Owen was elected to a four-year term in November 2016, while Ms. Burke initially was appointed to the board in 2017 on an interim basis before winning a special election in November 2018 to represent the district through the remainder of the term in December 2020.

“I welcome and fully support the change in leadership and (the board members’) commitment to all 24,000 RPS students,” Dawn C. Page, the former board chair, said after the vote.

Richmond Schools Superintendent Jason Kamras congratulated Ms. Owen and Ms. Burke, saying, “I am thrilled and delighted and look forward to working with you in the coming year.”

The new board leaders will continue implementing the administration’s five-year strategic plan, Dreams4RPS, which includes construction of three new schools that are to open this fall; renaming four schools, including George Mason Elementary; and working with the city on additional funding for Richmond Public Schools.

During Monday’s meeting, the board held an initial public hearing on renaming George Mason Elementary School at which several of the 16 speakers offered potential names.

• Henry L. Marsh III, a noted civil rights attorney and former state senator who was Richmond’s first African-American mayor; • Barbara Johns, who in April 1951 at the age of 16, led a student walkout to protest substandard conditions and resources at the all-black R.R. Moton High School in Prince Edward County;

• Oliver W. Hill Sr., the civil rights attorney who took the Prince Edward school case to the U.S. Supreme Court, where it became part of the historic 1954 Brown v. Board of Education decision that outlawed the doctrine of “separate but equal” for public schools;

• Rosa L. Dixon Bowser, the first black teacher hired in Richmond and president from 1890 to 1892 of what would later become the Virginia Teachers Association.

• Ethel Bailey Furman, the earliest known African-American female architect in Virginia, whose former home is at 33rd and Q streets in Church Hill;

• Church Hill, the community where George Mason Elementary is located.

Mike Werner, a military veteran, was the lone advocate speaking in support of keeping the school’s name, citing George Mason’s accomplishments and contributions to Virginia and the nation.

“Although George Mason was a slaveholder, he was the Virginia leader who authored the Virginia Declaration of Rights, the blueprint for the U.S. Bill of Rights,” Mr. Werner said. “We should not erase or forget our history.”

He called a name change for the school “extreme political correctness.”