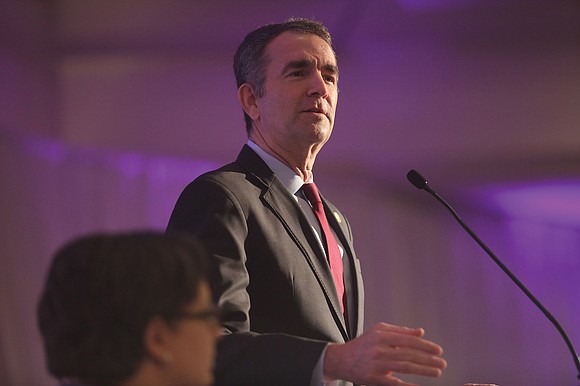 Gov. Ralph S. Northam outlines steps he has taken in the past year to increase equity in Virginia law. Photo by Regina H. Boone

Nearly a year after public revelations of racist photos published on his medical school yearbook page, Gov. Ralph S. Northam offered a mea culpa at Virginia Union University’s annual Martin Luther King Jr. Community Leaders Breakfast and acknowledged the lessons he has learned confronting some of his own painful truths.

“Over the past year, I have met with people across the Commonwealth on a listening tour,” he told a hushed audience of more than 700. “I had to confront my own incomplete understanding” regarding issues of race, equity and inequality.

“Those truths were not comfortable,” he said. “But the more I know, the more I can do to right the wrongs,” he said.

“My first step was to hire Dr. Janice Underwood, Virginia’s first ever director of diversity, equity and inclusion, who will develop inclusive practices in the administration and across state government,” he said, introducing Dr. Underwood, who stood to audience applause.

He then went on to talk about a range of efforts he has undertaken during the past year to mitigate some of the racial inequities in Virginia law and policy that have negatively impacted the African-American community.

traditionally held the Friday before the holiday honoring Dr. King. But about two weeks after his address last year, a conservative website exposed a racist photo on Gov. Northam’s 1984 yearbook page from Eastern Virginia Medical School. The photo showed two people, one in blackface and another dressed in a Ku Klux Klan robe and hood.

Gov. Northam initially apologized for appearing in the racist photo, but a day later changed his story and denied that he was either person in the photo.

The scandal rocked the state and nation, with people, including members of his own Democratic Party, calling for his resignation.

Gov. Northam refused to step down, instead vowing to listen, learn from the people and do better.

At the breakfast, he talked about two commissions he has appointed — one of which has identified “100 instances” of racist and discriminatory state laws that, while invalidated or no longer enforced, are still on the books from Virginia’s Jim Crow past.

He said he has requested that lawmakers work during the current General Assembly session to purge the racist language and laws. Among them are laws prohibiting interracial marriage, allowing a poll tax to prevent African-Americans from voting and to hamper integration of schools, neighborhoods and public transportation systems.

“We must realize that black oppression is still alive, but in a different form,” he said.

Another commission, Gov. Northam told the audience, is examining Virginia history textbooks to improve the way African-American history is taught to ensure all students have a better and comprehensive understanding of Virginia’s past.

His stated commitment to telling a full story of Virginia history — from slavery to Reconstruction, from the terrorism of the Jim Crow era to the hard-fought victories of the Civil Rights Movement — was met with applause.

The governor also talked about additional resources included in his proposed budget to address disparities in infant and maternal mortality rates among Virginia’s African-Americans and to boost early childhood education programs for 3- and 4-year-olds.

He also talked about his support for legislation that would shift state dollars to preserve historic African-American cemeteries “to make sure they are treated with the dignity and respect they deserve,” and for localities to have the authority to decide what to do with Confederate monuments.

“We are working to improve economic opportunities and diversity in state contracting by supporting more women-, minority- and veteran-owned businesses,” Gov. Northam continued. “This is the best way to honor Dr. King’s legacy.”