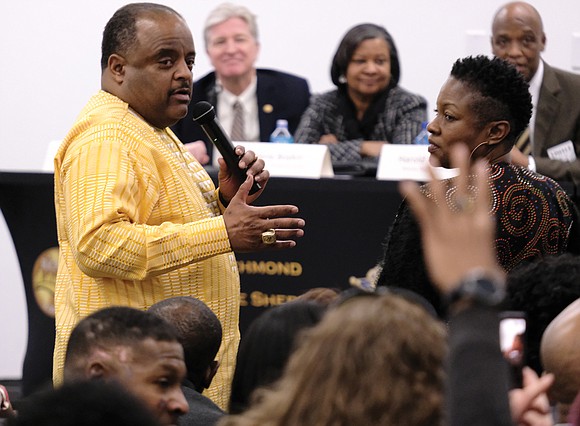 The state of criminal justice in Virginia is poor, according to a panel of local, state and national officials, educators and experts who discussed the topic during a summit last Saturday at the Richmond Justice Center.

Nine panelists discussed what many of them said is a criminal justice system that continues to mistreat Virginians generally, and African-Americans specifically, from the classroom to the jailhouse.

“Virginia is Alabama with a suit,” de- clared Dr. Colita Fairfax, a professor at Norfolk State University, who criticized a “history of subliminal policy in every major social institution in this state” that impacts how black children are viewed and treated.

She was joined on the stage by Harold W. Clarke, director of the Virginia Depart- ment of Corrections; Shannon L. Taylor, Henrico commonwealth’s attorney; Brian Moran, state secretary of public safety and homeland security; and Valerie Boykin, director of the state Department of Juvenile Justice, among others.

Security at the Richmond Justice Center was high during the summit. Patrol cars were stationed at the jail’s entrances and that of the neighboring Oliver Hill Courts Building. As many as 16 sheriff’s depu- ties were present in the room during the two-hour event.

Asked to grade Virginia’s approach to incarceration, Mr. Moran replied, “It’s not an ‘A,’ but it ain’t an ‘F’ either.”

He pointed to several pieces of legisla- tion taken up by the General Assembly, including bills that would decriminalize marijuana possession and would remove the penalty of suspending a person’s driver’s license for unpaid court fees, as evidence of improvements in how Virginia handles the issue.

Richmond Sheriff Antionette V. Irving said she has been effective in her goal to improve conditions of inmates and to ensure that they have the tools needed to be successful when they are released.

Other panelists cited as problems Virginia’s incarceration rate that is the 17th highest in the nation; poor conditions at jails outside of Richmond; and systemic issues that lead to racial profiling, over-policing of communities, over-prosecution of detainees and inflated budgets for police departments and jails.

Ms. Boykin said reforms in Virginia have led to a reduction in the number of juveniles incarcerated over the last 10 years from 850 to fewer than 350, but said work remains. She said African-American children continue to make up a dispropor- tionate number of juveniles incarcerated, contributing to an overrepresentation of people of color in the criminal justice system.

“We have improved drastically on the work that we do with young people,” Ms. Boykin said. “But we’re not where we want to be and where we need to be.”

Discussing education, panelists said the school-to-prison pipeline in Virginia is exacerbated by a lack of resources for students suffering through poverty or abuse, and an overreliance on police to handle conflicts, giving Virginia one of the highest rates in the nation of police referrals for student misconduct, according to the U.S. Department of Education’s Office for Civil Rights.

“We don’t have problem children; we have children with problems,” said panelist Jonathan Jackson, an activist and national spokesman for the Rainbow PUSH Coalition. “If the instinct of the police, the prosecutor, the judge and the principal is to arrest a child, they need to be fired because they’re not meant to work with children.”

Pushed by Mr. Martin and audience members for potential solutions, panelists offered an assortment of suggestions from putting public defenders offices in every Virginia jurisdiction to more services for those re-entering the community after incarceration, and more funding for historically black colleges and universities to better bias screening for law enforcement candidates and a better process to remove biased police officers.

Lt. Gov. Fairfax suggested creating conviction integrity units to review cases to identify and prevent false convictions. He also urged the audience to ignore people “trying to tear you down with lies and with falsehoods and with nonsense,” and instead focus on the issues.

The lieutenant governor has battled allegations made public last year that he sexually assaulted two women more than a decade ago. He has denied the allegations, saying he had consensual relations with both women. Neither woman filed a criminal complaint at the time.

A $400 million libel suit he filed against CBS News in the wake of their report on the allegations was dismissed last month by a federal judge.

Mr. Martin emphasized the need for audience members to commit to addressing a single issue through organized collectives and to push elected officials for solutions — and removing officials from office if they fail to address their concerns.

“Voting is the end of one process, but it’s the beginning of another,” Mr. Martin said. “There has to be an organized mobilization effort.”