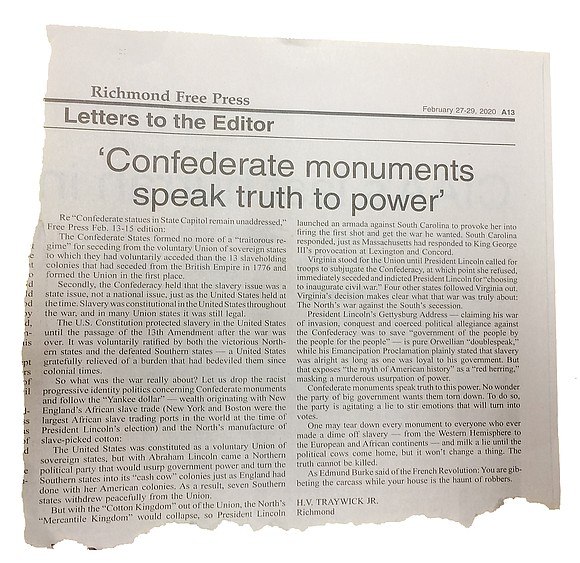 In response to the Free Press Letter to the Editor, might I remind the writer that the era of slavery is long gone and everything that celebrates it should be removed from our city streets and public squares.

The writer claimed that Confederate monuments speak truth to power but quite the converse is true. Facts are not truth. Facts change. Truth doesn’t.

Confederate monuments actually speak power to lies: 1) white people are better because of skin color; and, 2) the South deserves the privilege of touting its defeat as though it was victorious.

The writer said, “The truth cannot be killed.” He is absolutely right because truth has the power to outlast and eventually sup- plant lies. Truth owns a far deeper reality within human existence than a few facts of bygone eras. Truth can be mishandled, distorted, ignored, lied about, buried and even ignored, but its rootedness within human history will always force it to rise again and again and again.

Confederate monuments simply speak a factoid or two of a bygone era, but virtually every power decided slavery was wrong, sinful or immoral. Most have discovered the truth about our humanity. They have acted out that realization by removing the statues whose presence lend voice to the lies about humans, which truth has now overtaken. Confederate “facts” are no match for the deeper roots of truth about our collective humanity.

In past years, I have met for hours with some Sons of Confederate Veterans members — even had them to my church. I met as well with an officer of the United Daughters of the Confederacy in her home. In her lengthy exposition, I realized that the subsequent monuments were artifacts of their collective pain.

It is my hope that the writer soon will cease needing to inflict his historic pain upon others who have suffered atrociously at the hands of fellow Americans.

The fact that President Lincoln signaled “a new nation, conceived in liberty, and dedicated to the proposition that all (humans) are created equal” is not “Orwellian doublespeak” but truth refusing to remain buried in the coffins of hatred beneath the soil of history in the United States of America.