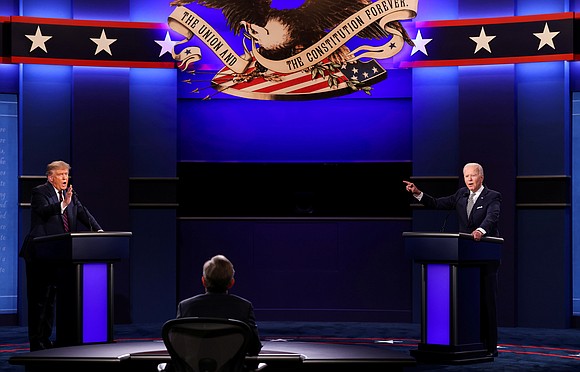 President Trump interrupts as his Democratic presidential opponent Joe Biden makes a point during Tuesday’s debate held on the campus of the Cleveland Clinic at Case Western Reserve University in Cleveland. Photo by Jonathan Ernst/Reuters

In a debate performance that left even his Republican supporters shaking their heads, President Trump stunningly refused to condemn racist, white supremacist groups.

He also confirmed during Tuesday night’s televised presidential debate that he’s trying to destroy the Affordable Care Act that provides health insurance for more than 20 million and spouted wild, conspiracy theories about voter fraud in continuing to press a narrative the election might be illegitimate.

His first face-off with Democratic rival Joe Biden was just as memorable for the constant interruptions and personal attacks that led the Commission on Presidential Debates to announce plans to inject more structure into the final two debates, scheduled for Thursday, Oct. 15, and Thursday, Oct. 22.

With observers later labeling the event a “dumpster fire,” “almost unwatchable” and “a disgrace,” the Cleveland debate on Tuesday showcased the nation’s leader in his best bullying mode. He refused to allow his opponent to speak and interrupted moderator Chris Wallace of Fox News almost as often, making it clear he preferred to aggressively interject angry and personal jabs that often overshadowed the policy questions.

The two men frequently talked over each other, with the president interjecting so often — 10 times on one question — that the former vice president eventually snapped, “Will you shut up, man.”

Speaking directly into the camera to the millions who had tuned in, Mr. Biden went on to say, “The fact is that everything he has said so far is a lie. I’m not here to call out his lies. Everyone knows he’s a liar.”

It is not clear the debate changed any voter’s mind, but this first meeting of the two major party candidates was regarded as arguably the best chance for the president, now trailing in the polls, to reframe the choice between himself and Mr. Biden.

Instead, President Trump chose to portray himself as chief blusterer. Even the normally restrained Associated Press, whose fact-checkers had a field day writing up President Trump’s falsehoods, reported that the president spent his time “unleashing a torrent of fabrications and fear mongering in a belligerent debate.”

The highlight came when Mr. Wallace handed him a softball question on whether he would condemn militias and white racist groups that have been among his top supporters.

Rather than doing so, the president pretended he had no idea how to answer the question.

“What do what to call them? Give me a name,” President Trump responded plaintively, even though he has previously condemned the Ku Klux Klan.

When Mr. Biden prompted with the name of the violent, far right Proud Boys, President Trump then stated without condemnation, “Proud Boys, stand back and stand by!”

Then the president shifted to his preferred target: “But I’ll tell you what, somebody’s got do something about Antifa (anti- fascists) and the left.” He blames Antifa for the civil unrest of the summer.

Many in the GOP agreed with Gianno Caldwell, a Black conservative political activist and author of “Taken for Granted,” who was left wincing at the president’s response. Mr. Caldwell said that should have been a “slam dunk” for the president and an opportunity to explain the plans and actions he has taken to benefit African-Americans.

“The president whiffed,” said a Republican legislator, who like others in the party are hoping the president can recover in the next debate.

When Mr. Biden noted the president was out to kill the Affordable Care Act, also known as Obamacare, President Trump agreed that the program needs to be tossed and renewed his promise to replace it, despite, as Mr. Biden noted, the fact that he has spent four years without coming up with a meaningful alternative.

Another key moment in the debate occurred near the end. Responding to an election integrity question, President Trump claimed there would be “massive fraud the likes which have never been seen before.”

Even though he has voted with a mailed-in ballot, he claimed that ballots would be thrown into creeks or tossed away. He also falsely claimed his campaign observers were turned away in Philadelphia. He also pointed out nine military ballots being inadvertently trashed, but failed to mention that it occurred in a Republican controlled elections office.

And he said he would not accept the election results if he felt it was rigged. He called on his supporters to watch carefully to catch the fraud he is certain will take place.

Brushing off the obvious Trump meltdown on this issue, Mr. Biden turned to the camera and told viewers that they will make the decision on the next president, “You have the power to decide this election. Vote, vote, vote. Vote whatever way is the best way for you,” Mr. Biden said. “Because he will not be able to stop you from determining the outcome of the election.”

And when the results are counted, Mr. Biden said, “I will accept it, and he will, too. You know why? Because once the winner is declared, once all the ballots are counted, that will be the end of it.”