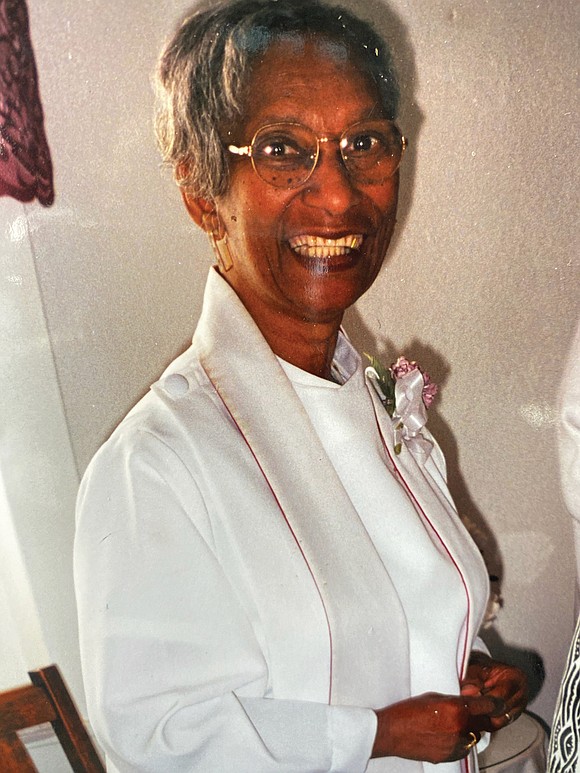 The Rev. Delores McFadden Robinson Seay, an associate minister at Triumphant Baptist Church who devoted herself to volunteer service at the church and in the community for decades, has died.

The Henrico County resident succumbed to illness on Friday, Sept. 25, 2020, her family said. She was 86.

Licensed and ordained at Triumphant Baptist in North Side, Rev. Seay regularly visited sick and shut-in members, ushered at services, taught Sunday School and Vacation Bible School and was active in the church’s Youth Ministry.

Though unpaid, she faced a major test in 1979 to become the first female associate minister at Triumphant Baptist, which is part of a denomination that has a history of opposition to female ministers. Even today, only a small number of women are serving as ordained Baptist pastors, according to Baptist Women in Ministry.

Rev.Seay’s daughter, Cathy R.Lomax, remembers her mother standing in front of the packed church and being peppered with questions about the Bible.

“The atmosphere was not very pleasant,” Ms. Lomax recalled. “But my mother was not intimidated. She remained calm and poised and showed she knew the Bible.

“She received a grade of 100 and a standing ovation. Even the men were pleasantly surprised by her knowledge and preparedness before the pastor, Dr. Arthur M. Jones, issued the ministry license,” Ms. Lomax said.

Born in Richmond and a graduate of Maggie L. Walker High School, Rev. Seay retired as a professional housekeeper and nanny. She served as a vol- unteer chaplain at Bon Secours Memorial Regional Hospital, a driver for Meals on Wheels and as an Election Day poll worker.

She also was a past president of the Tuckahoe Baptist Association’s Clergy Division and the Women’s League. She also was active in the Women’s Mission Society and the Lott Carey Foreign Mission Convention.