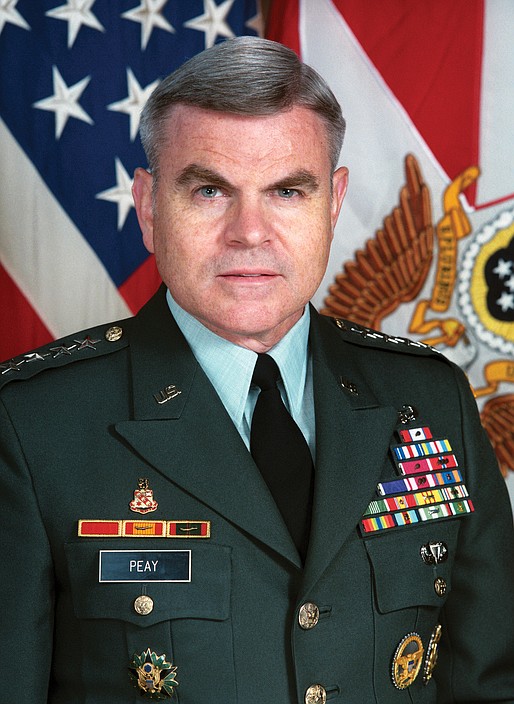 LEXINGTON - The superintendent of Virginia Military Institute resigned Monday, a week after Gov. Ralph S. Northam and other state officials ordered an investigation into what they characterized as a culture of “ongoing structural racism” at the college.

“Gen. Peay has served VMI as superintendent exceptionally well for more than 17 years. Gen. Peay is a great American, patriot and hero. He has profoundly changed our school for the better in all respects,” the statement said.

VMI, founded in 1839, was the first state-supported military college in the nation. Officials at the school have said they will cooperate with an investigation, but denied the allegation that the institution has systemic racial problems.

The first Black cadets enrolled at VMI in 1968; the first women, in 1997, after a U.S. Supreme Court decision forced the school to open to women. About 6 percent of VMI’s 1,700 cadets are Black, according to the State Council of Higher Education for Virginia.

Gov. Northam, a 1981 VMI graduate, and other top Democratic elected officials sent a letter to the public university’s board a week ago announcing an investigation into its culture, policies, practices and equity in disciplinary procedures. That decision came on the heels of a Washington Post article that described Black cadets and alumni facing “relentless racism.”

The Roanoke Times also reported months ago on Black alumni speaking out about racism at the school.

Mr. Boland responded to the officials last week, saying that the school welcomed a review. “However, systemic racism does not exist here and a fair and independent review will find that to be true,” Mr. Boland wrote in the letter.

But that was refuted by Delegate Jennifer Carroll Foy of Prince William County, a Black 2003 VMI graduate who recently announced her candidacy for governor in 2021.

In a statement released last week, Delegate Carroll Foy said, “The experiences that Black students continue to face at VMI — some of which I, myself, experienced — are egregious. And the daily occurrences of racism that Black Americans face should not be dismissed.” She also released a seven-point diversity and inclusion plan that she said VMI should adopt to root out racism. “Now is the time to come together to reimagine the future of the institute, which has a valuable role to play in shaping leaders equipped to handle 21st century challenges,” Delegate Carroll Foy stated to the Free Press in response to Gen. Peay’s resignation.

Mr. Boland’s statement Monday said the board would “immediately” turn its attention to the search for a new superintendent. Brig. Gen. Robert Moreschi, formerly the deputy superintendent for academics and dean of the faculty, will serve as the interim superintendent.

His resignation letter, which was posted online, said Gov. Northam’s chief of staff “conveyed” last Friday that the governor and certain legislative leaders had lost confidence in his leadership and wanted his resignation.

“Change is overdue at VMI, and the Board of Visitors bears a deep responsibility to embrace it,” Gov. Northam’s spokeswoman, Alena Yarmosky, said in a statement. “Diversity is a fundamental commitment.”

Several Republican lawmak- ers criticized Gov. Northam, who has publicly wrestled with racism in his past, for forcing Gen. Peay out before an investigation.

“I am deeply disappointed that Gen. Peay was not afforded the respect he deserved by the governor and the other elected officials who saw fit to demand his resignation only days after calling for an investigation of incidents alleged in the news media,” said Delegate Kirk Cox of Colonial Heights, the former speaker of the House of Delegates.

“The governor, in particular, should understand the importance of withholding judgment until the facts are in and should treat others with the same grace he once sought for himself,” he said, alluding to Gov. Northam’s refusal to resign from office in February 2019 after his 1984 medical school yearbook page was made public showing one person in blackface and another dressed in full Ku Klux Klan garb.