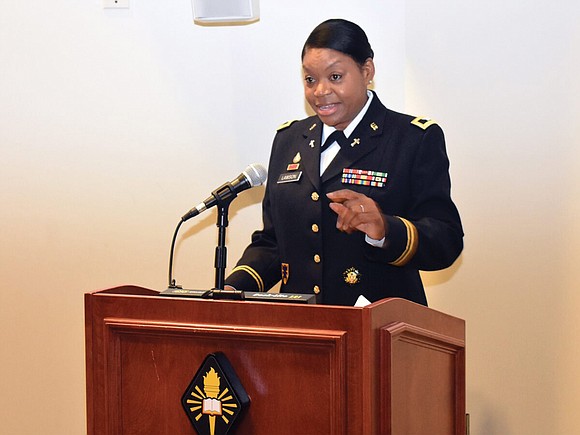 The U.S. Army has promoted an active-duty African- American woman chaplain to the rank of colonel for the first time.

“As an African-American woman who has always been proud of the skin that I’m in, in this time, this is a bright spot in a sea of what seems to be darkness never-ending,” Col. Lawson said during the ceremony in the auditorium of the school at Fort Jackson in South Carolina.

“In a time when we are faced with political polarization, racial unrest, a pandemic and economic uncertainty, it’s good to have something to celebrate and to take our minds off of what is going on, if only for a moment.”

The hourlong ceremony began with the playing of a recording of “The Star-Spangled Banner” and ended with those gathered in person singing “Lift Every Voice and Sing,” also known as the Black national anthem.

Col. Lawson spoke on the historic occasion of “the sin of racism” and the need for “heartfelt, heart-changing dialogue.”

“I know many of you are saying ‘What does race, race relations and racism have to do with you being promoted?” she said. “Well, just in case you didn’t figure it out, it took us 245 years for this moment to happen.”

Retired Chaplain Geraldine Manning, an African-American woman who served as an Army Guard and Reserve chaplain, previously was promoted to colonel.

By contrast, Col. Lawson is an active duty service member.

The Scripture reading, from the Book of Isaiah, included the words: “But those who hope in the Lord will renew their strength. They will soar on wings like eagles; they will run and not grow weary, they will walk and not faint.”

Earlier in the ceremony, before the eagle insignia were attached to the shoulders of her uniform to symbolize Col. Lawson’s promotion, Maj. Gen. Thomas Solhjem, Army chief of chaplains, encouraged Col. Lawson to empower those beneath her to succeed.

After Maj. Gen. Solhjem led her in an oath to the U.S. Constitution, the two exchanged elbow bumps instead of handshakes, in light of the coronavirus pandemic.

Col. Lawson, a native of Five Points, Ala., is a graduate of Spelman College and earned a master’s of divinity from Turner Theological Seminary, the A.M.E. Church’s school on the campus of Atlanta’s Interdenominational Theologi- cal Center.

In her remarks, Col. Lawson paid tribute to several men and women who were among the earliest Black or female military chaplains or colonels in the chaplain corps. They paved the way for her, she said.

“Too many times when people write history, we tend to leave out the history of those who made it possible for us to achieve our historic moments,” she said.