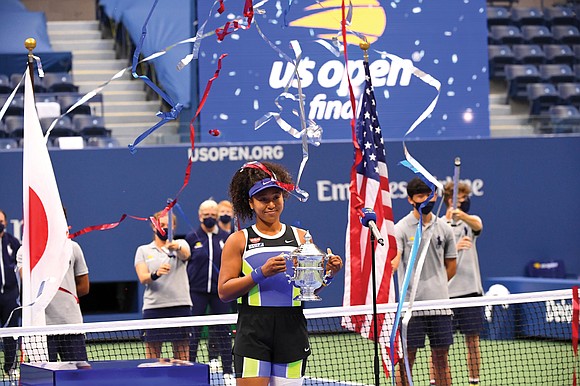 Striding into Arthur Ashe Stadium for her first round match 12 days ago, Osaka put her activism front-and-center from the start, wearing a mask to honor Breonna Taylor, a Black woman killed by Louisville, Ky., police officers who burst into her apartment late one night in March.

Osaka would go on to recognize seven different Black Americans — one for each of the seven rounds of the tournament — bringing the Black Lives Matter protests against police brutality and equal justice to her sport’s broad international fan base.

In addition to a mask bearing Ms. Taylor’s name, Osaka wore masks honoring Trayvon Martin, 17, shot and killed in February 2012 by a man as he was returning to his father’s townhome in Sanford, Fla., from a convenience store run for Skittles and an ice tea; Tamir Rice, 12, who was holding a toy gun when a Cleveland police officer shot and killed him in November 2014; Philando Castile, 32, who was fatally shot by a suburban St. Paul, Minn., police officer during a traffic stop with his partner and her 4-year-old daughter in the car; Elijah McClain, 23, who was walking home from a convenience store when he was tackled by Aurora, Colo., police, put in a carotid hold and later injected with ketamine by first responders who took him to a hospital, where he died August 2019 after being declared brain dead; Ahmaud Arbery, 25, who was jogging in a Glynn County, Ga., neighborhood when he was chased down by a father and son in a pickup truck and shot and killed in February; and George Floyd, 46, who was killed May 25 by a Minneapolis police officer who held his knee on Mr. Floyd’s neck for nearly 9 minutes.

Asked after her final victorious match what message she hoped to send with her masks, Osaka turned the question on her interviewer: “What was the message that you got?”

“The point is to make people start talking,” the 22-year-old Osaka added.

Osaka, who was born in Japan to a Haitian father and Japanese mother, spent her formative years in the United States and lives in Los Angeles. She represents her birth country in competition but her influence defies international borders.

“Everything that I was doing off the court was sort of on the court at the same time, too,” she said in a televised interview after her three-sets win over Victoria Azarenka of Belarus. “It made me stronger because I felt like I have more desire to win because I want to show more names.”

One of the most recognized personalities in Japan, Osaka sent shockwaves through her sport before the tournament even began.

She forced the postponement of the Western & Southern Open semifinal late last month after opting out of the match in protest over the Aug. 23 police shooting of Jacob Blake in Kenosha, Wis., as NBA and WNBA mounted similar boycotts.

“Watching the continued genocide of Black people at the hand of the police is honestly making me sick to my stomach,” Osaka wrote on social media at the time.

“It has been more than 50 years since athletes like Muhammad Ali, John Carlos and Tommie Smith and the Original 9 of women’s tennis all stood up and used their sport, their voices and their actions to change humanity,” King said. “The baton has been passed and Naomi has accepted it.”

Osaka’s final mask of the U.S. Open bore the name of youngster Tamir Rice. Osaka said she thought about wearing the mask for her trophy ceremony but was told not to don a face covering for the exchange.

Osaka, who has immersed herself in Haitian history as she forms her views on racial and social justice, said she would be interested in meeting with the families of the seven people who appeared on her masks during the tournament.

“I learn more through experiences,” she said. “For me, I feel like sharing stories and hearing people’s experiences is very valuable.”

During the tournament, Osaka received video messages from Trayvon Martin’s mother, Sybrina Fulton, and Marcus Arbery Sr., the father of Mr. Arbery. She was moved to tears by their messages of thanks for wearing the masks bearing the names of their late children, and urging her on in the tournament.

After her tournament victory, the family of Mr. Floyd sent her a congratulatory video message. People in Japan celebrated her victory and her social justice message.

“I am very happy that Naomi, who is an influential person, said ‘Black Lives Matter’ in a public place,” said 16-year-old Mari Maeda. “I am happy that her message was received not only in the U.S. but also the world, including Japan.”

A report in Japanese newspaper Mainichi late last week cited unnamed sources at one of her sponsors as criticizing her BLM stance, saying they would prefer her to concentrate on tennis.

But going by the comments of people in Tokyo on Sunday, the sponsor may have misjudged public sentiment despite the nation’s largely homogeneous culture.

“Including myself, I think there are many people who are not interested in a topic like racism,” said office worker Masateru Tanimoto.

“But (Osaka) has created an opportunity to open the topic ... Although people may agree or disagree, I think it is a good thing that the issue has become a topic of discussion.”