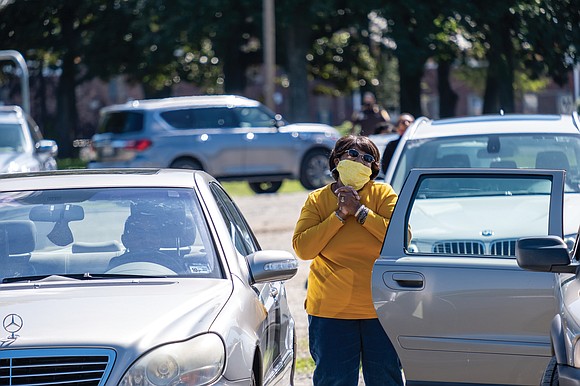 Gayle Clarke, a member of Moore Street Missionary Baptist Church, gets out of her car to listen to the sermon delivered by church pastor Dr. Alonza L. Lawrence during the church’s drive-in homecoming service last Sunday in the parking lot of Hovey Field at Virginia Union University. Photo by Sandra Sellars

For the past 27 Sundays, the Moore Street Missionary Baptist Church congregation has held worship service over Zoom and Bible study via conference calls.

The church’s pastor, Dr. Alonza L. Lawrence, has delivered his sermons to an empty sanctuary, which were recorded for broadcast on Zoom and Facebook.

However for homecoming last Sunday, the congregation worked out a safe way for members to meet in-person and hear Dr. Lawrence preach during the COVID-19 pandemic – a drive-in church service in the parking lot of Virginia Union University’s Hovey Field.

It was the first time in months that Dr. Lawrence had an opportunity to deliver his sermon in front of an audience, although instead of applause, his message was praised by flashing lights and car horns. 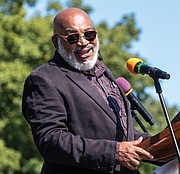 Still, it was good to preach in front of a crowd again, he said.

About 40 cars and SUVs — some with just a single person and others with families — lined up in three rows facing Dr. Lawrence, who preached from a stage set up in front. With him on the stage were three singers, two keyboardists, a drummer and a bassist. All the musicians wore masks. The choir members pulled down their masks when they began singing.

During the pandemic, the Moore Street congregation has adapted to worshipping at home together through a combination of pre-recorded services, Bible study conference calls and Zoom get-togethers. According to Dr. Lawrence, about 50 households tune in for the online service every Sunday.

“The virtual thing is a little different, but it’s still a blessing,” he said. Worshipping via Zoom “allows us to see each other, to spend time together before we show the recorded worship service and then spend time together afterward. So we’ve not lost the fellowship and we’ve had a consistent crowd to join us,” he said.

The congregation’s commitment to the church hasn’t wavered during the pandemic as even lifelong members, including 78-year-old Gloria Coleman, adapted to meeting over the phone and computer rather than in person.

But for Ms. Coleman, Sunday’s drive-in service was something special.

“During the pandemic, it has really been a struggle not being in the building. But the people are the church,” said Ms. Coleman, who has been a member of the church since she was 8. “I am really excited about us doing this because, even though we’re in our cars, we get to see different people.”

For the first time in about six months, Ms. Coleman and others were able to see each other from their car windows. They listened to Dr. Lawrence preach and to Music Coordinator Shalimar Hickman-Fields leading gospel hymns. The congregation also sang “Happy Birthday” together, a third Sunday tradition to recognize those celebrating birthdays during the month.

“This is one of those lifetime congregations,” Mrs. Hickman-Fields said when asked when she became a member. “I’ve had the opportunity to work with other churches, but there’s nothing like being at home.”

Mrs. Hickman-Fields said while she misses the sound of a full choir, she organized a small ensemble to perform at the homecoming celebration. The ensemble also performs for the church’s recorded services.

“Because we’re an ensemble, it doesn’t feel different from the performance perspective,” Mrs. Hickman-Fields said. “What’s really different for me is that we don’t have all the voices. We’ve struggled with picking the songs that we can sing with just three or four voices. The fellowship is what we really miss.”

On Sunday, attendees joined with the ensemble in singing the hymns and the birthday chorus from their cars. Those who attended also received gift bags with candy and other goodies to commemorate the occasion. Others still had the option to participate by Zoom and Facebook live.

“We still recognize that, in this day in time, we will never be able to go back to not using the technology,” Dr. Lawrence said. “So our commitment has to be to maintain the Zoom or streaming or whatever it is. We can’t shy away from it.”

During the service, Dr. Lawrence thanked the congregation members for their kindness and commitment to the church and asked members to anticipate similar socially distanced events in the future.