Spotlight on president of the League of Women Voters of Virginia 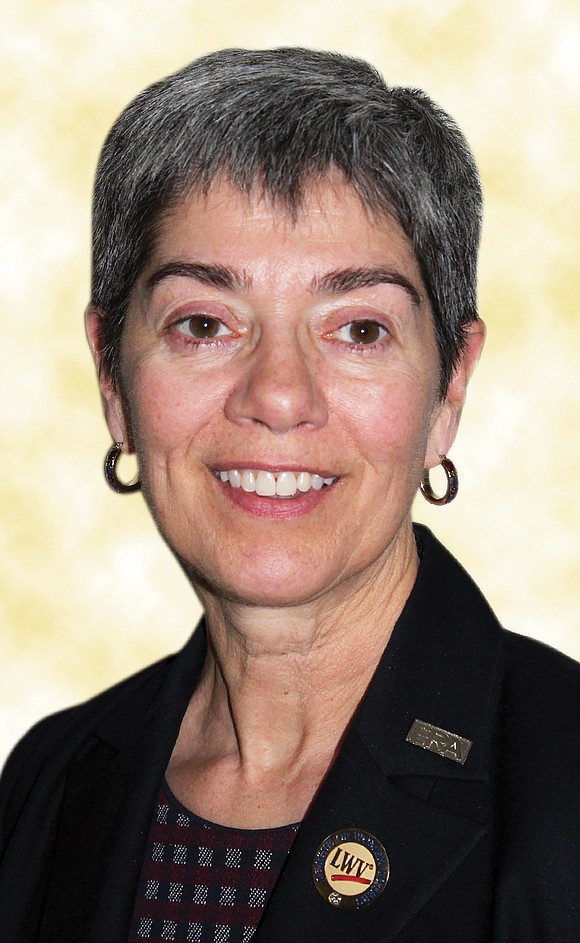 The 2020 general election has begun, and for Virginians voting by absentee ballot, there is one less hurdle this year, thanks to the work of the League of Women Voters of Virginia and its president Debora B. “Deb” Wake.

The nonpartisan organization, whose primary mission is to help register, educate and advocate for voters, successfully filed suit earlier this year to waive the requirement for all absentee voters to open and fill out their ballot in front of another adult and for the witness to sign a statement attesting to that. The requirement, which was waived for the June primaries and in the November general election, removes an obstacle to voting for those most vulnerable to COVID-19.

It’s a significant victory for the Virginia organization, formed on Nov. 10, 1920, just months after the national organization’s inception. The Virginia League’s first president, artist and suffragist Adele Goodman Clark is immortalized in bronze as one of the figures on “Voices from the Garden, Virginia Women’s Monument” in Capitol Square.

“I saw an opportunity to bring people together,” Ms. Wake says when asked about her decision to accept the job as president. She said statewide membership had splintered into isolated branches that she felt could do more by working together and partnering with other organizations.

As president, Ms. Wake has been balancing the league’s responsibilities of voter registration and information, and forums on candidates and electoral issues with several new challenges. This includes commemorating the league’s 100th anniversary,

continuing a two-year study on affordable housing, advocating for the environment, gun violence prevention laws and other issues during the General Assembly and managing the difficulty of election outreach and voter reg- istration during the COVID-19 pandemic.

As the November election ramps up, members across the state have sent more than 200,000 postcards to unregistered and low turnout voters, distributed tens of thousands of fliers to various community sites and have had multiple outreach and education programs, online and offline, all with the goal of getting people registered to vote and informing and preparing Virginia voters about the issues.

Many of these efforts have been done through cooperation with other groups, including Reclaim Our Vote as well as legislators and community leaders. It’s this collaboration that Ms. Wake says is the most important goal and strategy as president.

With early, in-person voting underway since Sept. 18, many of the organization’s members, including Ms. Wake, will be vol- unteering as poll workers, running hotlines and reminding people to vote through canvassing efforts, while still following COVID-19 safety guidelines.

Ms. Wake sees the voter turnout so far as an encouraging sign of “how important voting is to people.”

No. 1 volunteer position: President, League of Women Voters of Virginia.

Date and place of birth: 1963 in Rockingham County.

Where I live now: Vienna, Va.

League of Women Voters’ mission: The League of Women Voters is a 100-year-old organization birthed from the Suffrage Movement. The original goals were to register all of the newly eligible women voters, educate them on the issues so that they could make up their own minds at the polls and advocate for issues that are important to them. Now, 100 years later, although we have expanded our outreach for registration and education of all citizens, we still hold firm to those three core principles.

When and why the League of Women Voters was founded: Feb. 14, 1920. We were founded by Carrie Chapman Catt six months before the enactment of the 19th Amendment.

Why the League of Women Voters of Virginia is important in our community: We are a conduit of nonpartisan, reliable information for voters. In this day and age of hyper-partisanism and division, we are the voice of reason. Our VOTE411.org website is a nationwide tool for voters to find not only their polling locations but to learn what candidates and issues are on the ballot, plus other relevant voting information.

No. 1 goal or project as president: Collaboration. It’s funny, I didn’t really have a lofty goal — and yet, we have accomplished a lot in the last year. We supported a host of new laws enacted July 1 and in the special session that will make it easier for people to exercise their right to vote.

The 19th Amendment is: Important because it gave women — mostly white women — the right to vote. Clearly it didn’t do enough to truly make the ballot box accessible to Black voters; that was the federal Voting Rights Act of 1965. However, in 1920 when the 19th Amendment passed, some women were able to vote and started demanding changes in the laws, especially relating to labor laws to protect children and young women. It illustrates the importance of being able to vote for lawmakers who truly represent their constituents. The 19th Amendment and its relationship to Virginia: Virginia did not ratify the 19thAmendment until 1952. It was difficult for women to vote because of Jim Crow laws and other suppressive measures. Laws had been in place for centuries where women were considered property of their fathers and then their husbands. Women tended to vote the way their husbands instructed and it would take time to change that culture. The League of Women Voters was integral to those changes by educating voters and working for more inclusive laws.

What the centennial anniversary of the ratification of the 19th Amendment means today: It means that we still have work to do. Virginia passed the Equal Rights Amendment earlier this year. We were the 38th and final state needed for passage. Yet, political maneuverings are keeping this much-needed amendment out of the U.S. Constitution. It means despite better representation in our state government, we still only have 11 women senators out of 40 and 29 women delegates out of 100. The makeup of the General Assembly should resemble that of the voting population. Then we will have a truly representative Democracy.

Why the LWV is important in the Black community: Much of our work today focuses on engaging, registering and increasing access to voting. We have been focusing particularly on those who are most often or historically disenfranchised. Access to the polls means access for all and we have tripled our commitment to this effort.

How the League of Women Voters of Virginia plans to get people to the polls on Tuesday, Nov. 3: We are doing outreach in every form. Many of our members, like myself, are poll workers. We will also be staffing hotlines and knocking on doors reminding people to vote. We’ve already been fielding a lot of questions from voters who want to make sure they are prepared.

People should take advantage of early voting, which began Sept. 18. Virginia no longer requires an excuse to vote early. Voters should check with their local registrar to find times and locations: https://vote.elections.virginia.gov/voterinformation/publiccontactlookup.

Vote by mail ballots must be requested from local registrars by Oct. 23, but please don’t wait that long. Go online or contact your registrar now and to get your ballot. Anyone with questions can contact us at voterservices@lwv-va. org or call (804) 447-8494.

How I start the day: There’s a lot to do, better get started.

Three words that best describe me: Optimistic, straightforward and a processor.

Best late-night snack: I try not to, but if I reach for something, it’s probably going to be chocolate.

How I unwind: Knitting.

Something I love to do that most people would never imagine: Sew.

Best thing my parents ever taught me: Hard work and commitment.

Person who influenced me the most: My piano teacher, Dorothy Thomas, who was a better listener and therapist than I was a student.

Book that influenced me the most: “A Christmas Carol” by Charles Dickens.

What I’m reading now: “Gerrymanders: How Redistricting Has Protected Slavery, White Supremacy and Partisan Minorities in Virginia” by Brent Tarter.

Next goal: For the league, we need campaign finance reform to minimize the influence of money in politics. On a personal level, I’d like to learn to professionally tailor clothes.