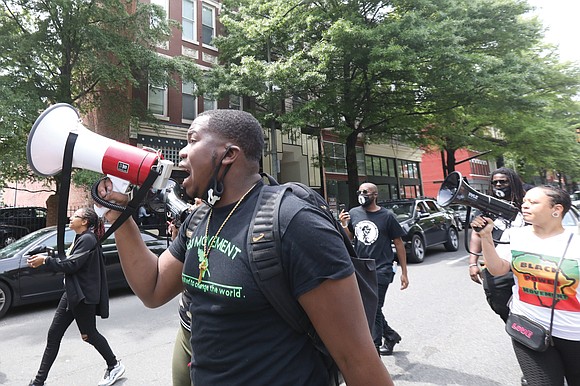 Corey Stuckey, a senior at George Wythe High School, leads several dozen community members in a rally and march on April 23 in Downtown, demanding that city and school officials expedite plans to build a replacement for the dilapidated school in South Side. The group also called for students to be at the table for decision-making. The march went from the Maggie L. Walker statue at Adams and Broad streets to City Hall at 9th and Broad streets. Photo by Regina H. Boone

The price tag to replace aging George Wythe High School has jumped to $140 million, a 40 percent hike from the previous estimate of $100 million.

Mayor Levar M. Stoney’s administration issued the estimate and recommended that City Council increase the total amount available in the city’s capital budget for the school replacement from $100 million to $200 million, just in case, with the appropriation to become available July 1, 2023.

The increased price for a new 2,000-student school to replace the 61-year-old, 1,500-student capacity high school in South Side has emerged as City Hall and the Richmond School Board spar over control of construction.

Backed by a state law and a three-year-old City Council policy encouraging the School Board to develop new schools, the School Board has rebuffed the Stoney administration’s request to continue maintaining construction control the city was first granted 10 years ago.

According to the Stoney administration, the School Board’s action has blocked the city’s plan to issue a request for proposals from architectural firms to design the new building in setting a goal of having the school built and opened by Aug. 23, 2023. 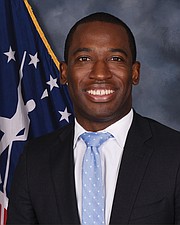 The administration has acknowledged that the School Board is on sound legal ground and also indicated that the ambitious effort to open the building within two years might not be met.

The issue of control moved to the front burner April 19 when the School Board voted to retake control of the building work and directed Schools Superintendent Jason Kamras to begin the process of hiring a construction team and to develop and issue a request for proposals for design this year. Mr. Kamras was opposed to the board’s decision.

The issue of construction control will top the agenda at the next Educational Compact meeting scheduled for 5 p.m. Wednesday, May 5, according to information on the School Board’s website. The meeting is designed to bring together the mayor and members of City Council and the School Board.

Advocates have called for an end to the politics and for the school to be built. George Wythe senior Corey Stuckey organized a rally and march last week from the Maggie L. Walker statue on Broad Street to City Hall, demanding that the bickering stop and plans for a new school be expedited.

The new estimate for George Wythe suggests Richmond would have to spend $70,000 per student to build the new high school, which is double the cost of a new high school and at least 45 percent more in per-student cost than Henrico County currently is spending for replacements for J.R. Tucker and Highland Springs high schools.

Fifth District City Councilwoman Stephanie A. Lynch said a process the School Board can accept can be created so that the project can move ahead. She is concerned that construction inflation can drive the school’s price tag even higher if the School Board continues to insist on control.

in 2019, the county reported that the bids came in nearly 18 percent higher than the original estimates. The county is spending nearly $100 million each to develop the two buildings that are to open this year.

School Board Vice Chairman Jonathan M. Young, a leader in pushing School Board control, is skeptical that city officials have produced a reasonable estimate.

“I am not naïve about the inflation in the construction industry,” Mr. Young said, but he does not expect a new George Wythe to cost as much as the new city estimate. He has spent the past four years advocating for school control of construction is his concern.

“This is not our money. These are taxpayer dollars,” he said. The development of new schools buildings should focus on getting the most building for the least cost “as good stewards of those dollars,” he added. Most people “don’t care who builds a new George Wythe. They just want it to get done,” he said.

He noted that Henrico has taken three years to develop its new high schools, so a September 2024 opening for a new George Wythe would be a reasonable timetable.

The School Board last led new school construction in the late 1990s when U.S. Sen. Tim Kaine was serving as Richmond mayor. At that time, the School Board developed three new elementary school buildings and Lucille M. Brown Middle School.

Former Mayor Dwight C. Jones insisted on having the city handle construction of four new schools, including Huguenot High and Martin Luther King Jr. Middle. The School Board ended up being saddled with problems at the Huguenot building and wasted space, Mr. Young said.

In the most recent round involving the construction of Henry L. Marsh III and Cardinal elementary schools and River City Middle School, the School Board’s contention that the city overpaid has been confirmed in a report from the City Auditor’s office.

Additionally, despite claims by the city administration, the three schools weren’t considered ready for occupancy until November, more than two months past the deadline, while construction mistakes were not corrected until late March.