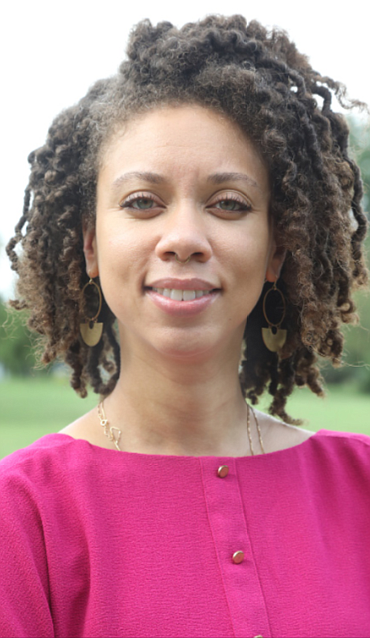 Adriea Clarke is founder of an event that seeks to bridge the gap between the public and veganism and provide a space for African-Americans to share and show the curious, particularly people of color, an entry point into the lifestyle.

The event, Soul Vegan Block Party, will take place 1 to 6 p.m. Saturday, Sept. 11, at Chimbo- razo Park, 3215 E. Broad St. And Ms. Clarke is as optimistic as ever in its mission of introducing a plant-based lifestyle with fun and uplift.

“Soul Vegan aims to be a reminder that food is a part of culture and that there is still soul in plant-based eating,” Ms. Clarke says.

More than 70 vendors are expected, including food vendors, speakers, a cooking demonstration, a hip-hop cardio class, music and people selling an array of hand-crafted items and other products.

Ms. Clarke says she hopes the event will help dispel some of the stereotypes surrounding veganism, including that it’s “for a specific demographic; they’re all hippies; they’re sickly and frail; they hate anyone who isn’t vegan; they only eat salads; and that they’re concerned about protein.”

Outside of some stereotypes, she says she hopes the event will help educate people “on getting back to more ancestral eating.”

“Although this (ancestral) eating pattern may not be completely devoid of eating meat, it did focus more highly on plant-based whole foods – fruits, vegetables, nuts and seeds,” Ms. Clarke says, “and it can be the start of a healthier lifestyle.

While the Soul Vegan Block Party was started in December 2018, Ms. Clarke’s path to veganism began years earlier. In the wake of health concerns, she sought holistic methods to improve her health, eventually becoming a vegan in February 2016 after seeing positive change through her new food choices.

However, Ms. Clarke also became aware of the lack of diversity in these spaces, and ultimately resolved to change the stereotypical image of veganism and open the lifestyle wider for all.

“I’ve visited multiple vegan festivals but at some, I noticed there weren’t a lot of Black attendees and vendors and de- cided that there was no reason for there not to be.”

The Soul Vegan Block Party has grown yearly from its initial 54 vendors and around 2,500 attendees.

“Although the vegan scene is rapidly growing and expanding nationwide, at the community level there’s still confusion and hesitancy about what it is and how it can be done,” Ms. Clarke says. “This event shows that being vegan can be fun, delicious and attainable.”

Meet a proponent of healthy eating through veganism and this week’s Personality, Adriea Clarke:

Date and place of birth: Jan. 17 in Richmond.

Education: I was home-schooled for high school and went to Reynolds Community College for a couple years. I then went to the Bon Secours School of Medical Imaging for radiation sciences and then earned a bachelor’s in business administration from Averett University.

Occupation: I am a traveling radiology and computed tomography technologist. I travel to facilities around the country, with Arizona being the furthest state from Virginia where I’ve accepted a contract.

Soul Vegan Block Party is: An event to introduce and promote a plant-based lifestyle in a positive environment with a focus on uplifting communities of color.

Where I got the idea: After I got all the way to Arizona, my work contract was canceled so I came home. As I was trying to fall asleep, I had the idea to have a vegan festival focused on the African-American community. I’ve visited multiple vegan festivals but, at some, I noticed there weren’t a lot of Black attendees and vendors and decided that there was no reason for there not to be.

Why it is needed in Richmond: Although the vegan scene is rapidly growing and expanding nationwide, at the community level there’s still confusion and hesitancy about what it is and how it can be done. This event shows that being vegan can be fun, delicious and attainable; that meals can be more than salads; and that there is a community of Black vegans or vegan-curious so no one has to travel this journey alone. I hope people also leave more educated on how to incorporate more plant-based foods into their daily routine. Eating less meat can have a dramatically positive impact on health.

A vegan is: An individual who does not consume any animal products or their byproducts and also does not use/wear animal products. This means that a vegan does not con- sume any meat, poultry, seafood, gelatin, dairy, eggs or honey. They also would not wear items containing animal skins, like leather, or use products that contain animal milk or beeswax.

A vegetarian is: An individual who does not consume any animal products but might still consume dairy and/or eggs. There are many variations of vegetarianism but vegans do it better.

I chose a vegan lifestyle because: Of a health concern. I had a cyst on my ovary, which I had surgically removed. At a follow-up appointment, a fibroid was found. I was determined not to have surgery again so I began to look into holistic ways of either stopping its growth or at least slowing it down. I came across a website that talked about how a vegan lifestyle could cause fibroids to shrink. I decided to try it for six months, which was also around the time for another follow-up appointment. It had started to shrink so I committed to the lifestyle.

Three easy ways to become a vegan: 1. Take it one meal at a time. Figure out one thing you can substitute. 2. Follow vegan creators on social media/You- Tube. 3. Give yourself grace and forgive yourself often. Mistakes happen and so does giving into urges. However, the key is not to stay there and to make a plan so you don’t feel trapped or tempted. I used to take a plate to Thanksgiving dinner or the cookout. Now they tell me what they’ll have for me and make a special space on the grill for my Beyond Sausage. Soul Vegan aims to be a reminder that food is a part of culture and that there is still soul in plant-based eating.

How I start the day: With a prayer of gratitude, meditation and 16 ounces of water after a “shot” of spirulina and chlorophyll. If I have seamoss, I take a spoonful of that, too.

Three words that best describe me: About-the-business, funny and passionate.

Favorite vegan chef: Honestly, I don’t have a favorite vegan chef because I am not a fan of cooking. However, @brown- vegan, @damgoodvegan, @ sweetpotatosoul and @chefkeva have recipes that are beginner friendly and use ingredients I can easily purchase or already have. (Let me tell you, once you get a few months in, you will always have beans, a couple of cans of coconut milk and a whole new row of spices.)

How I unwind: Listening to audiobooks and watching YouTube videos on camper renovations and de-cluttering.

What I am learning about myself during the pandemic: That I have to practice patience and acceptance more. Everything won’t happen when and how I want it to.

Something I love to do that most people would never imagine: Listening to murder mystery podcasts. I know a lot more about Ed Gein than I should.

Quote that I am most inspired by: “You can’t be halfway right on a wrong answer.”

At the top of my “to-do” list: To make sure everything is in order for the big day but also to experience life a lot more.

Best thing my parents ever taught me: To tell the truth and to pay myself first.

Person who influenced me the most: My mother who can and will figure out how to get it done. (She is also a Capricorn so that makes sense.)

Book that influenced me the most: “People Can’t Drive You Crazy if You Don’t Give Them the Keys” by Mike Bechtle.

Next goal: I’d like to be a traveling vegan creative. But honestly, I’m still figuring it all out.