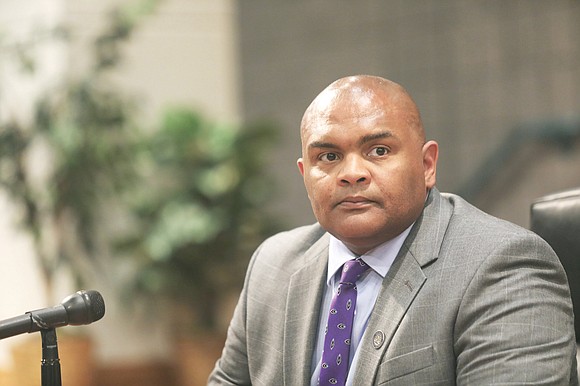 Richmond Police Chief Gerald M. smith is getting to know the Richmond community, learning the department and working to boost the morale of officers in the wake of recent protests. Photo by Regina H. Boone

The department has not officially confirmed the dismissals, but their photos and information have been removed from the Richmond Police website.

In an oblique statement that did not mention the dismissals, Chief Smith said that he had opened up opportunities “for change and growth” in the department.

The three who were dismissed played roles in the Richmond Police response to the social justice protests during the summer. Deputy Chief O’Kleasky, for example, headed patrol services.

However, their departure also could have resulted from Chief Smith’s wish to install his own team in leadership positions. Chief Smith took over during the height of the protests. He had been a deputy chief in Charlotte, N.C.

In the wake of the changes, Chief Smith promoted Capt. Rick Edwards to acting major to command Area I, which includes the East End and South Side, while Maj. Darrell Goins was promoted to the major for business services to oversee the training academy, police evidence and similar matters.