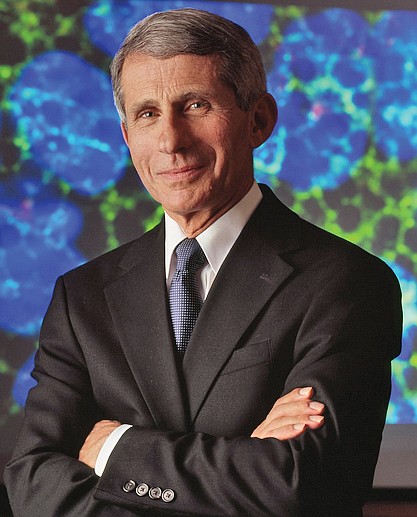 “We want you all to get vaccinated for your own protection, for that of your family and for your community,” Dr. Anthony S. Fauci, who leads the nation’s health efforts to combat COVID-19, told a Zoom audience of about 10,000 people on a call with Richmond and Virginia health officials Jan. 8.

He speculated that the United States could potentially end the COVID-19 outbreak toward the end of this year.

“I believe strongly that we can do it,” he said.

Dr. Fauci, director of the National Institutes of Allergy and Infectious Diseases, fielded questions from Virginia faith leaders and others on the call as the featured guest on “Facts and Faith Fridays,” hosted by Dr. Robert Winn, head of Virginia Commonwealth University’s Massey Cancer Center.

The weekly Zoom meetings were launched in early March to reach Black ministers to discuss COVID-19, cancer and other health issues. Dr. Winn teamed up with the Rev. F. Todd Gray of Richmond’s Fifth Street Baptist Church to connect with area clergy during the Friday calls.

Dr. Fauci explained how the nature of the front line jobs and living conditions of many people in minority communities had led to more Black people and Latinos being infected with COVID-19. The high rates of underlying diseases, including diabetes and heart disease, among people of color also has led to severe COVID-19 disease — and death — once infected, he said.

Dr. Fauci also detailed the process of vaccine approval in an effort to debunk misconceptions about the effectiveness and efficacy of the coronavirus vaccines.

“The vaccine is the way to stop this virus. It’s our path forward to recovery and the clearest way we’re going to get back to something that feels like normal,” said Gov. Ralph S. Northam, a physician, who also was on the call.

He emphasized how important leaders in all faiths would be in informing their communities about the vaccine.

“You are trusted leaders in your communities, and you can be a huge help in getting the word out that vaccines are safe and that people should take them,” he said.

The Zoom session was held as state officials have ramped up efforts to dis- tribute the vaccine more quickly. Area health officials announced that beginning Monday, Jan. 18, the group eligible to receive the vaccine will be expanded to include teachers, firefighters and police officers, child care workers and those who work in correctional facilities and homeless shelters.

According to data posted Wednesday by the Virginia Department of Health, nearly 24 percent of the 904,400 doses of COVID-19 vaccine distributed throughout Virginia have been administered. That represents about 216,257 doses.

But the Pfizer-BioNTech and Moderna vaccines require two doses roughly 21 days apart to be most effective, officials have said. On Wednesday, only 22,985 people in Virginia have been fully vaccinated with both doses.

Dr. Fauci and others acknowledged the long-standing distrust of medical officials and the federal government among minority communities because of what he called a “shameful past” of experimentation and exploitation.

However, he and other health officials were confident there would be no major problems with the vaccines for minority communities and the public at large.

“There are now safeguards in place that will never let that happen again,” said Dr. Fauci, who pointed to his own vaccination as evidence of his trust in the work so far.

Dr. Fauci has hopes that April will see a nationwide “open season,” where anyone is able to be vaccinated no matter where they may be on the priority list.

Ideas shared by Dr. Fauci and others included ways churches could promote the vaccines and other safety measures to their congregations, how to discuss the matter with people whose belief systems may prevent them from taking vaccines, and how churches could potentially serve as vaccination sites to increase the vaccine’s availability.

“I think that our local health depart- ments would be eager to work with faith leaders in the local jurisdictions around the Commonwealth,” said Virginia Health Commissioner Dr. Norman Oliver, “to have those sites be places where we can carry out vaccination at the time when we’re ready to roll that out to the general public, or maybe even before, when we’re doing more broader populations.”