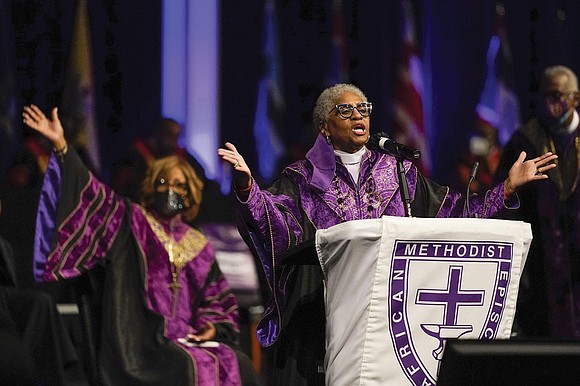 The bishops of the African Methodist Episcopal Church opened their denomination’s major meeting — a year after it was delayed due to the coronavirus — with a call for greater worldwide access to COVID-19 vaccines and testing.

“Joining our ecumenical and interfaith partners, we call on the United States government to expedite equity in global vaccinations,” they said in a statement released during a news conference Tuesday at the start of their General Conference.

The bishops cited “the desperate need of COVID testing and vaccine resources” in regions outside the United States such as Africa, India and the Caribbean.

The denomination’s five day-meeting in Orlando, Fla., is expected to include recorded messages from President Biden and Vice President Kamala Harris, and attendees will consider proposed legislation.

One proposal suggests repealing the denomination’s ban on same-sex marriage, but John Thomas III, editor of the denomination’s official publication, The Christian Recorder, told Religion News Service that “it probably won’t make it to the floor.” Usually about a tenth of the proposals for the meet- ing get adopted and become part of the church’s doctrinal book, noted an AME pastor who has served on the Revisions Committee at several General Conference meetings.

In their statement, the leaders of the historic Black denomination, which dates to 1787, also addressed critical race theory, an academic theory about systemic racism, in a global context.

“We acknowledge the current controversy around Critical Race Theory and acknowledge that healing can only begin when the traumas of the past are recognized,” the bishops said.

“In African Methodism, our strategy will be informed by the notion that racism is the root evil and that ending racism is one of our highest priorities. We need partners in the fight against race-inspired ills that continue to cry out against inequities beyond the borders of the USA. We must signal to public officials that the actions taken are more important than the proclamations made.”

CRT has sparked debate within other religious organizations, including the Southern Baptist Convention, as well as in Congress and in school districts across the country.

The AME bishops also highlighted a congregation and a deaconess affiliated with their denomination who have worked to draw national attention to events in Black history related to slavery and its aftermath.

They saluted Opal Lee, 94, of Fort Worth, Texas, who made symbolic marches to Washington, D.C., to seek a holiday marking June 19, 1865, when enslaved Black people in Texas learned they were free — two and a half years after the Emancipation Proclamation.

“In 2021, the world learned anew of AME power, commitment and tenacity as Juneteenth became a federal holiday,” the bishops said.

Weeks before President Biden signed the Juneteenth National Independence Day Act on June 17, an AME church in Tulsa, Okla., dedicated a prayer wall during commemoration ceremonies for the 100th anniversary of the massacre in that city when a white mob killed an estimated 300 Black people.

The bishops expressed their support for a reparations bill for the massacre and apology to the three remaining survivors and the descendants of those who were killed.

“Joining with Vernon Chapel AME, the only landmark that survived the massacre, our commitment is to make it the law of the land,” they said. “Reparations is a solution.”

The bishops also expressed their support for other legislation related to voting rights, quoting the namesake of the proposed John Lewis Voting Rights Act.

“Especially in the wake of the recent Supreme Court decision essentially gutting the remaining protections of the 1965 Voting Rights Act,” they said, “the AME Church must take a public position, and get into ‘good trouble,’ thus helping to ensure that there is authentic voter integrity and protection of every person’s right to vote.”