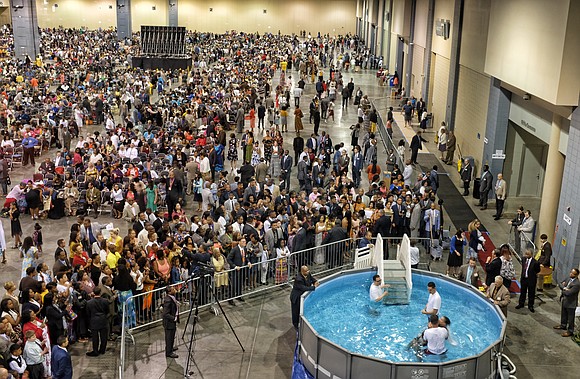 Jehovah’s Witnesses Convention in Downtown Richmond in a previous year.

For the second consecutive year, the Jehovah’s Witnesses have canceled their large, in-person annual three-day conventions in Richmond and around the globe because of the coronavirus pandemic.

Instead, the denomination’s followers will hold virtual conventions, with congregations united in watching online through July and August.

It is only the second time since 1897 that the Jehovah’s Witnesses will not hold their in-person conventions.

Organizers said the change affecting 15 million to 20 million faithful in 240 nations has not curbed the enthusiasm for the annual event.

“Faith has helped our global brotherhood to continue to thrive even during a pandemic,” said Robert Hendriks, U.S. spokesman for Jehovah’s Witnesses. “Our faith will continue to unite us in worship — even virtually — as millions gather in private homes around the world to enjoy a powerful and inspiring spiritual program.”

This year’s theme: “Powerful by Faith!”

The conventions are free to stream by the public and are available in more than 500 languages at jw.org.