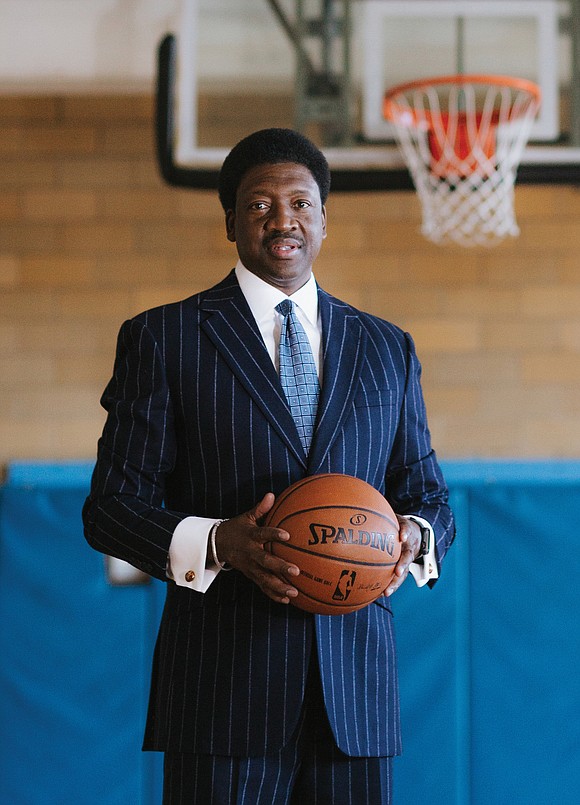 A storied pro basketball career, educational and entrepreneurial success and helping to better the lives of African-American youths.

For most people, any one of these accomplishments would be a high water mark. But for John S. “Johnny” Newman Jr., who next week is to receive Kappa Alpha Psi Fraternity’s Elder Watson Diggs Award, they’re all just chapters in a life well lived.

“I was overjoyed, delighted and humbled with the news,” Mr. Newman says about learning he had won the national fraternity’s second highest award. “This is a great honor, and to be selected by my fellow brothers of this great fraternity is overwhelming.”

The Danville native and former University of Richmond basketball standout who played 16 seasons in the NBA, including with the New York Knicks and the Charlotte Hornets, is being recognized for his “stellar achievement and outstanding performance documented throughout his years of service to Kappa Alpha Psi Inc.” according to the fraternity’s executive director, John F. Burrell.

The award will be presented to Mr. Newman on Wednesday, July 14, during the fraternity’s national conclave in Phoenix.

Mr. Newman pledged Kappa Alpha Psi in April 1983 through the Eta Xi Chapter at Virginia Commonwealth University, after being introduced to the fraternity during his freshman year at the University of Richmond. He cites the influence of fraternity members such as his high school coach, Harry J. Johnson in Danville, as key inspirations for his involvement in the fraternity.

Mr. Newman currently is a member of the fraternity’s alumni chapters in both Richmond and Danville.

“Kappa Alpha Psi is a very important part of my life,” Mr. Newman says. “It has given me the opportunity to learn and work with so many men of high achievement for the betterment of our communities.”

In the nearly 40 years he has been involved with the fraternity, Mr. Newman has worked to further the organization’s mission to lead African-American youths to greater success and accomplishments.

He helped develop the fraternity’s Sports and Entertainment Committee, which encouraged many members to re-engage with the fraternity. As a result of the effort, the committee helped expand the fraternity’s “Room to Read” program in which members across the nation mentor youths through reading and civic engagement.

Mr. Newman currently is using his professional network and business acumen to develop and host a television show called “Nupe to Nupe.” The show will be used as a platform for fellow athletes, entertainers and others to share how Kappa Alpha Psi has influenced their careers and lives for the better.

This mix of forward-thinking ideas and focus on community improvement has defined Mr. Newman’s relationship and approach to Kappa Alpha Psi.

“I am proud to be a Kappa,” Mr. Newman says. “It was one of the best decisions of my life. I am grateful that my professional experience has given me a platform to raise awareness and highlight the achievements of our fraternity and the standards we hold and value to help attract new members through that spotlight.”

Date and place of birth: Nov. 28 in Danville.

Mission of Kappa Alpha Psi Fraternity: The fraternity would be more than another social organization. Reliance would be placed upon high Christian ideals and the purpose of achievement. The fraternity would seek to raise the sights of Black youths and stimulate them to accomplishments higher than might otherwise be realized or even imagined.

When and where I became a member: April 1983 at Virginia Commonwealth University, the Eta Xi Chapter of Kappa Alpha Psi. Currently, I am a member of both the Richmond Alumni Chapter and the Danville Alumni Chapter.

What Kappa Alpha Psi Fraternity means to me: Kappa Alpha Psi is a very important part of my life. It has given me the opportunity to learn and work with so many men of high achievement for the betterment of our communities.

First reaction to news of being selected for award: I was overjoyed, delighted and humbled with the news.

When and where the award will be presented: At 7 p.m. Wednesday, July 14, during the 85th Grand Chapter Meeting July 10 to July 17, in Phoenix.

What award means to me: It means the world to me. This is a great honor, and to be selected by my fellow brothers of this great fraternity is overwhelming.

Number of fraternity chapters: There are more than 721 undergraduate and alumni chapters in every state of the United States, and international chapters in the United Kingdom, Germany, South Korea, Japan, U.S. Virgin Islands, Panama, Nigeria, South Africa, The Bahamas, Canada and the United Arab Emirates.

Number of members: The fraternity has more than 160,000 members.

How fraternity participates in our community: Kappa Alpha Psi sponsors programs providing community service, social welfare and academic scholarship through the Kappa Alpha Psi Foundation and is a supporter of community programs such as the United Negro College Fund, Habitat for Humanity, St. Jude’s Children’s Hospital, the Adopt a School initiative, volunteering at local Boys & Girls Clubs and Sponsoring Guide Right programs to help give the youths of the community structure and guidance.

How I start the day: By thanking God for another day, and I get my mind ready to battle the everyday challenges of the world.

Three words that best describe me: Ambitious, compassionate and courageous.

How I unwind: Go out and shoot 1,000 jump shots, play golf, listen to smooth R& B or visit a Caribbean island.

Something I love to do that most people would never imagine: I love to rehab houses. I am very handy with tools.

Quote that I am most inspired by: “A man who wants to lead the orchestra must turn his back on the crowd.”

At the top of my “to-do” list: Travel to Portofino and Capri in Italy.

Best thing my parents ever taught me: Hard works pays off and honesty is the best policy.

Person who influenced me the most: My grandfather, James Newman.

Book that influenced me the most: “Anything You Want: 40 Lessons for a New Kind of Entrepreneur” by Derek Sivers.

Next goal: Start my podcast show.