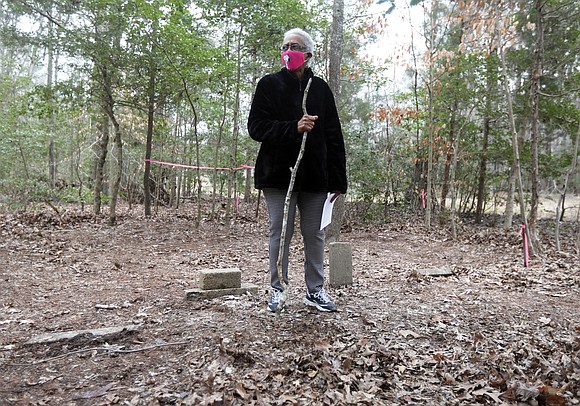 Carolyn Bradford Moten stands among the headstones in an unmarked cemetery that was found on land off Long Bridge Road in Eastern Henrico County that is now owned by the Capitol Region Land Conservancy. The land was purchased in 1874 by Abraham Truman and stayed in the Truman family until 1979. Ms. Moten is his great-niece. Photo by Regina H. Boone

Nine years after the Civil War and his enslavement ended, Abraham Truman scraped up the money and bought a 40-acre farm plot for his family in the historically African-American Gravel Hill community in Eastern Henrico.

The widowed owner tried to cheat Mr. Truman by refusing to deliver the deed, but he got the property when a white neighbor, John K. Fussell, went to court to testify on his behalf that the money had been paid to the woman’s late husband.

After years of farming the land that nestles Sweeney Creek and the 4900 block of Long Bridge Road, Mr. Truman was buried on the property as were 10 other family members through the years, including a grandson, Samuel Truman, a government mail service employee.

The family cemetery was largely forgotten after heirs, who had long given up agriculture, sold the property 105 years later to people who wanted to keep it in its natural state.

The small marker rests at the grave of Samuel Truman, grandson of Abraham Truman, who bought the land to farm following the Civil War. Samuel Truman died at age 28 from typhoid fever, according to records.

Leaves covered up the plots and the three headstones, and saplings and other vegetation began growing on the mostly unmarked gravesites.

The small Black family cemetery was rediscovered only after the Capital Region Land Conservancy bought the land nearly three years ago to ensure its permanent protection.

To that end, Mr. Agelasto said the conservancy commissioned the College of William & Mary’s Center for Archaeological Research to conduct a survey, which quickly turned up what Mr. Agelasto calls “sacred ground.”

Courthouse and census documents have helped uncover more of the history of the family and Mr. Truman whose name was variously spelled Abram Trueman and Abram Truman by clerks. To the family, he is Abraham Truman, Mr. Agelasto said.

The documents include information on a special commissioner’s hearing about ownership of the property that led to Mr. Truman finally getting the deed.

Mr. Agelasto said the research also showed a surprising link with the recently rediscovered cemetery of the fraternal Sons and Daughters of Ham Inc. located next to the city-owned Bandy Field near Patterson Avenue and Three Chopt Road in Western Henrico County.

It turns out that one of Abraham Truman’s grandsons, William Truman, married Grace Bradford, whose family had created a now-demolished family subdivision on what is now Bandy Field. Bradford family members belonged to the Sons and Daughters of Ham and are among those buried in the 1-acre graveyard that neighbors the University of Richmond.

As part of the conservancy’s work, the Truman family cemetery “will be protected now that it has been cleaned and the ground debris removed. We will consult with the descendants and determine what they may like to do to mark other gravesites or install signage.”

Archaeology teams also turned up other forgotten history about the Truman property, said Joe B. Jones, the center’s director. That includes flints and arrowheads that show Native Americans at least stopped and camped briefly on the property up to 5,000 years ago, he said.

Probes of the topsoil also turned up a small amount of Civil War ammo, indicating that Mr. Truman’s land was at least on the fringe of the Second Battle of Deep Bottom in August 1864 at nearby Fussell’s Mill and possibly the First Battle in July 1864 that took place around Gravel Hill.

The property was near both battles, and Long Bridge Road is known to have been used for troop movements, Mr. Jones said.

Mr.Agelasto said the conservancy sought the property in 2018 to extend the 6,000 acres of land that is now under protection through the conservancy or other organization. The project land extends through a neighboring farm and battlefield site to the conservancy-owned Malvern Hill. Other nearby wooded, undeveloped land is part of the Curles Neck Farm holdings.