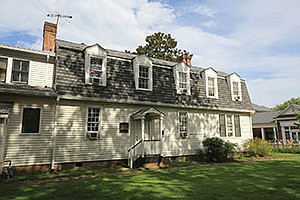 WILLIAMSBURG - The College of William & Mary and Colonial Williamsburg are teaming up to preserve the legacy of an 18th century school that was dedicated to the education of enslaved and free Black children in Virginia.

The museum and university said in a news release last week that the small, white building will be moved from the school’s campus to Colonial Williamsburg’s Historic Area.

The university said that the Bray-Digges House is likely the oldest building still in existence in the United States that was dedicated to the education of Black children. Colonial Williamsburg researchers analyzed the building’s wood framing last year to confirm that it once housed the school.

The partnership also establishes the Williamsburg Bray School Initiative. It will use the site as a focal point for research and discussions over the complicated story of race, religion and education in America.

The institution educated many of the town’s Black children from 1760 to 1774. Its mission was to impart Christian education to Black children and for students to accept enslavement as divinely ordained. Benjamin Franklin had suggested that it be established.

Older photo of the Bray-Digges House

“So much of our history as a nation has gone unrecorded — the history of African-Americans, their oppression and resistance,” said William & Mary President Katherine A. Rowe. “By studying the legacy of the Bray School students, we will uncover and illuminate some of the most important impacts of education in the story of America.”

Colonial Williamsburg’s initial work to restore and interpret the school was paid for in part with a $400,000 grant from the Gladys and Franklin Clark Foundation. Additional funds will be raised.

“We invite guests, the community and the nation to join us as we continue to pursue and present a more complete story of all who lived in Williamsburg during the Revolutionary era,” said Cliff Fleet, president and chief executive officer of Colonial Williamsburg.