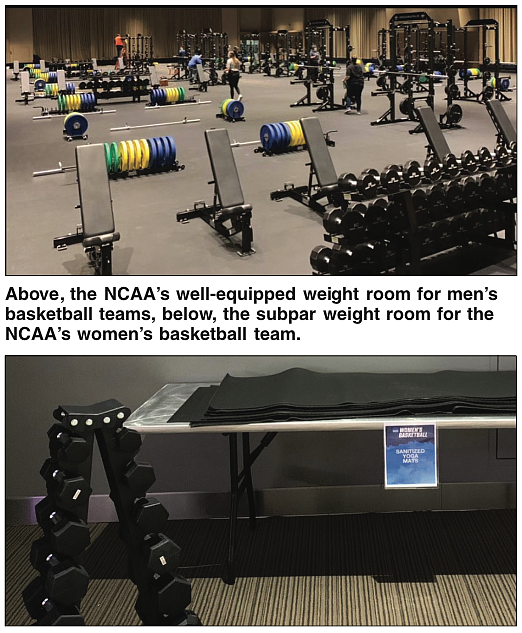 SAN ANTONIO - The NCAA’s inequities in women’s sports are showing. And the NCAA officially, embarrassed mightily on social media, moved quickly to try to clean up the problems.

Last Saturday, just a day after the NCAA was heavily criticized for not having an adequate facility for the women’s teams to lift weights and work out during the NCAA Tournament, the organization created a fully stocked workout room at the convention center in San Antonio near the practice courts.

The NCAA originally told teams in a manual that there wouldn’t be a weight room facility until after the second round when only 16 teams would remain.

But that changed after a tweet from Stanford strength Coach Ali Kershner and a video from Oregon’s Sedonia Prince went viral with nearly 16 million views showing off a single rack of dumbbells and yoga mats for the women’s teams playing in Texas, while the men had a fully stocked exercise room before the start of their tournament in Indiana.

That set off a backlash condemning the inequities between the men’s and women’s tournaments that drew the attention of NBA and WNBA players as well as former coaches. The men had a fully stocked weight room before the start of their tournament.

NCAAbasketball administra- tors apologized to the women’s basketball players and coaches and NCAA Senior Vice President of Basketball Dan Gavitt vowed to do better during a Zoom call Friday morning.

“I apologize to the women’s student-athletes, coaches and committee for dropping the ball on the weight room issue in San Antonio, we’ll get it fixed as soon as possible,” Gavitt said.

The NCAA said that the workout items shown in Prince’s video were never in- tended to be the weight room, but just some equipment for teams to use while they waited to get onto the practice court as it was being sanitized.

Now teams can sign up for 45-minute blocks of time to work out in the new weight room. There are heavier weights as well as squat racks, benches and exercises balls. The NCAA brought in a few of the teams’ strength and conditioning coaches to ensure that the new area was up to their standards before the start of the women’s tournament on Sunday.

But during Gavitt’s Zoom call, other differences were raised: There are 68 teams in the men’s field, 64 in the women; and the NCAA pays for the men’s National Invitation Tournament, but not the women’s NIT.

“The field size and NIT, those would be decisions made in conjunction with membership,” Gavitt said. “Those are not decisions we could make independently. They are good questions and it’s timely to raise those issues again.”

Players also raised questions about the gift bags they received compared to the ones that the men were given. The NCAA told The AP that the value of the bags was equitable.

“There is no answer that the NCAA executive leadership led by Mark Emmert can give to explain the disparities,” Staley posted to Twitter on Friday night. “Mark Emmert and his team point blank chose to create them! The real issue is not the weights or the ‘swag’ bags. It’s that they did not think or do not think that the women’s players ‘deserve’ the same amenities of the men.”

Staley’s team is a No. 1 seed at the tournament.

NCAA leaders also apologized about food issues at the women’s tournament and said they, too, were being addressed. Emmert said the differences in COVID-19 testing between the men’s and women’s tournaments were due to different testing providers in Indiana and Texas.

“We cannot as leaders of young women allow Mark Emmert and his team to use us and our student-athletes at their convenience,” Staley, 50, wrote. “Every team here in San Antonio has earned and deserves at a minimum the same level of respect as the men. All the teams here dealt with the same issues as the men’s teams this season, yet their ‘reward’ is different.”

A discussion has started among the conference commissioners and the NCAA on how to avoid this in the future.

“I hope it opens a broader examination of how we invest, support and make decisions in the sport of basketball at all levels within our system,” America East Commissioner Amy Huchthausen said.

“There are complexities and tensions to be sure. But moments like this should force us to re-examine how we got here. This isn’t just about dumbbells or swag bags. This is about our fundamental expectations for fairness and equity and ensuring the outcomes of our decisions can meet those standards to deliver a quality experience for our student athletes.”