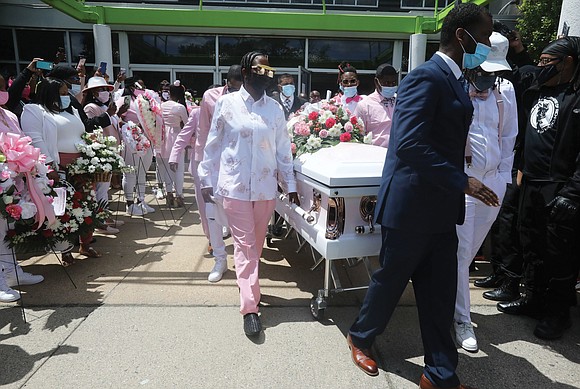 Hundreds of mourners gather to pay their final respects at a funeral last Saturday for Sharnez Hill, 30, and her 3-month-old daughter, Neziah Hill. The mother and child were shot and killed in a tragic incident April 27 at the Belt Atlantic Apartments in South Side. Three others were wounded, including 11- and 15-year-old girls and a 29-year-old woman. Richmond Police have arrested and charged five men, ages 18 to 23, who authorities said were shooting at each other across an apartment complex courtyard. The slain mother and daughter shared the casket, which was carried by pallbearers to a horse-drawn funeral carriage outside United Nations Church on Cowardin Avenue. The carriage led a procession to Oakwood Cemetery, where Ms. Hill and her infant were buried.