’Surviving COVID: Local author details battle her husband endured and she waged against the virus 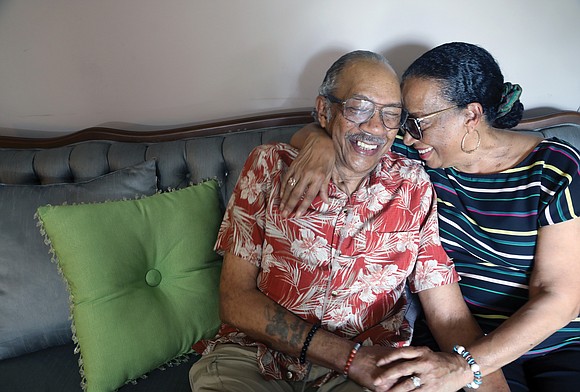 Charlene Warner Coleman believes faith, prayer and the healing power of music brought her husband, Ed Coleman, through a near-fatal battle with the coronavirus. Photo by Regina H. Boone

This is the detail that Charlene Warner Coleman wants Richmond — and the world, really — to know about her husband, Ed Coleman, and his near-death battle with COVID-19 during the pandemic’s early stages in 2020 when the hope of a vaccine was moving into a national reality.

Nearly a year later, Mr. Coleman is not only among the living, he is the central figure in a new book, “Surviving COVID,” about his six-month ordeal as a patient on a special COVID-19 wing at the Hunter Holmes McGuire Veterans Administration Medical Center.

While Mr. Coleman currently is dependent on oxygen “24/7,” said his wife, he is still teaching Shotokan karate, a Japanese style of martial arts he began studying at age 14, as much as his health will allow.

“This is a survivor’s tale about a virus that’s a death threat. It’s uplifting in the end,” she said. “But people need to know just how bad it can get.”

The book is especially close to Mrs. Warner Coleman. She wrote and self-published the 110-page survivor’s tale as witness to what she labels a miracle.

“When the doctors looked at him,” she recalled, “they told me to get his papers ready. He had every precursor to die — 14 major operations, a stomach aneurysm, two brain aneurysms, a previous smoker, and he was 76.”

Yet while doctors were preparing her for the worst, Mrs. Warner Coleman turned her attention to prayer, faith, the healing power of music and the support of relatives with deep medical knowledge.

It was only by accident that Mr. Coleman, a disabled veteran who had served in the U.S. Army Special Forces as a paratrooper during the Vietnam era, even learned he’d contracted COVID- 19 in the early spring of 2020.

“When I got sick,” Mr. Coleman explained, “I didn’t believe I was sick.”

During a routine visit to the VA for treatment of ailing knees, he was asked to take a COVID-19 test. The test came back positive although he showed no immediate signs of the virus.

However, within days, a trio of symptoms emerged, starting with a cough, then a struggle to breathe, joined by intense fatigue to the point of being unable to stand. Mrs. Warner Coleman, herself an asthmatic, convinced her husband of 25 years to return to the hospital only after a call to two cousins who are doctors in Washington, D.C, who were helping to battle the virus there. She also got help from a falsehood.

“I basically had to lie,” said Mrs. Warner Coleman, a 75-year-old Henrico County. “I told him, ‘All you need is some oxygen. I’ll wait outside.’I knew they were going to keep him. He had that look of death.”

Doctors believed the same and told her so. Repeatedly, she said.

Yet with every prayer, Mrs. Warner Coleman became emboldened, somehow convinced that faith would free her husband — “the love of my life” —from COVID-19’s fatal grip.

“I argued with those doctors, I mean I argued. For months, I’d tell the staff, ‘You know who you have in that bed? He’s a vibrant man, a celebrity.’ They got sick of me.”

Added Mr. Coleman: “Doctors kept telling her to gather the family. She went crazy – in a good way. They told me later, she just wouldn’t believe it.”

Mrs. Warner Coleman said she never contracted the virus. She credits the Moderna vaccine, which she signed up for as soon as she was eligible, and a lifelong discipline of taking “intense” vitamins daily.

She said her husband has since been vaccinated, as well.

As she details in the book through excerpts of daily texts with hospital staff and photos of Mr. Coleman’s decline, Mrs. Warner Coleman became a fixture at the hospital but virtually. Because of COVID-19, she couldn’t visit her husband.

With an iPad placed in his hospital room and daily phone calls to the staff, she watched him endure two bouts of double pneumonia and six weeks of intubation. When doctors opted to place Mr. Coleman in a medically induced coma in order to treat his erratic blood pressure and other signs of instability, Mrs. Warner Coleman set up a virtual vigil at his bedside, talking to him by phone and insisting that he have access to music— salsa, reggae, African beats and other music from their history as producers of Tropical Beat, a globally distributed cable television show.

The pair met in 1997 in New York’s John F. Kennedy International Airport. They were each waiting to board the same flight to Benin, West Africa.

“We talked all the way across the Atlantic Ocean,” Ms. Warner Coleman said.

Now with the couple battling against COVID-19, her fierce belief that her husband would live to be an example of healing instead of death was forged in part by the magical way they met but also by a deep sense of spirituality.

“I’m not the most religious person, but I’ve always known there was a power out there and I called on it. I asked God for a miracle, and I’ve lived to see it come true.”

Though she made a daily diary of the experience, Mrs. Warner Coleman did not fully entertain the idea of writing a book until well after Mr. Coleman came home in late summer. The decision to document what they’d lived through was spurred by growing news reports of people doubting COVID-19’s toll. She said she also had a debt to repay.

“I promised God, ‘If you let him live, I’ll sing your praises,’” she said.

In the book’s opening pages, she speaks somewhat openly to COVID-19 disbelievers: “I have fulfilled my promise and hope you will heed my advice. There is a vaccine and I suggest you take it.”

“Surviving COVID” can be ordered online at https://charlenecoleman.com.