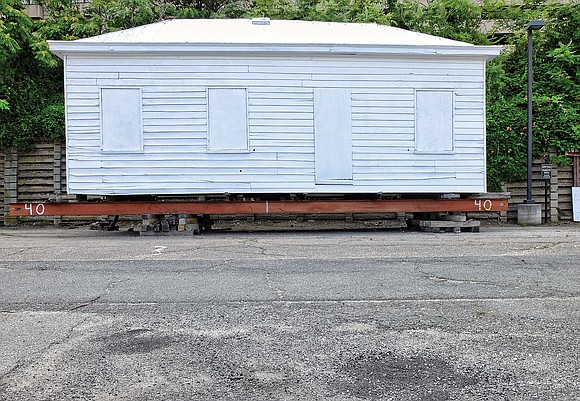 The historic Winfree Cottage, which sits beside the Lumpkin’s Jail site on the Richmond Slave trail in Shockoe bottom, is said to be the last slave cottage in Richmond. The cottage was purchased or built in 1866 by David Winfree, a former slave owner, who deeded it to Emily Winfree, his former slave and the mother of five of his children. 2016 File photo

A hefty price tag would be attached to creating a national slavery museum on the site of the “Devil’s Half Aacre,” a once notorious slave jail that Richmonder Robert Lumpkin operated before the Civil War and that later became the birthplace of Virginia Union University.

A report from SmithGroup, a museum consultancy, estimates that the cost of developing a 100,000-square-foot building that would feature the remains of Lumpkin’s Jail would run between $184 million and $220 million.

The SmithGroup provided the cost estimates in a report delivered to the city in late September detailing the feasibility of the project.

Contracted by the city, the SmithGroup has been involved since 2017 in the complex planning involved with the physical development of a museum.

Among the reasons the museum would prove more costly, according to the report, is that the site is in a flood plain and would need to meet federal standards. In addition, the site has a high water table below ground that also would require extra protective measures for the building’s foundation.

Shockoe Bottom is so named because Shockoe Creek, which is now buried in an underground pipe, runs through it to the James River.

The now-defunct Richmond Slave Trail Commission has been envisioning creating such a museum in Shockoe Bottom, the place where Richmond was founded and which became a major hub of the

U.S. slave trade between 1820 or so to emancipation in 1865 after Union forces won the Civil War. Lumpkin’s Jail dates to around 1844.

The commission paid for professional archaeological digs in 2006 and 2008 that found the remains of Lumpkin’s Jail. Since then, creation of a museum at the site had been a key focus for the commission.

Mayor Stoney created a community advisory group called the Shockoe Alliance to create a development plan for Shockoe Bottom that would, among other things, incorporate the proposals for the museum and memorial park focusing on the area’s slave history. Members of the Slave Trail Commission were included in the alliance and ended the commission’s independent operation two years ago.

Seeking to build momentum, Mayor Stoney announced in late July 2020 plans to invest more than $38 million to help make the museum and memorial park initiative a reality in five years. He later gained City Council backing for the initiative.

As a result of state contributions, more than $50 million could be available for the development. Since 2015, three governors and the General Assembly have allocated a total of $20 million to support development of the proposed museum and the Richmond Slave Trail.

Still, such public funding would fall short. Supporters acknowledge that the prospects for the museum would require an increased infusion of public funds as well as a significant fundraising effort to raise private donations.