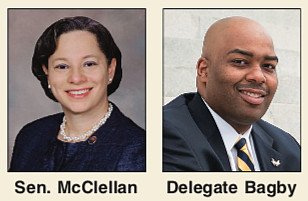 Two Richmond-area Democratic members of the General Assembly are preparing to run for the vacant 4th Congressional District seat, the Free Press has learned.

The seat is now empty as a result of the death of U.S. Rep. A. Donald McEachin on Nov. 28. Announcements are expected to come shortly

Both have brushed off speculation about their plans ahead of yesterday’s funeral for the congressman, who succumbed to cancer after a nine-year battle.

“Sen. McClellan deeply respects Congressman McEachin’s tremendous legacy and is honored that community leaders have encouraged her to run for this seat,” said Jared Leopold, a spokesperson for Sen. McClellan. “She takes the responsibility of this legacy seriously and will announce her next steps by early next week.”

But both have privately determined to go for the seat, the Free Press was told.

The competition will begin as soon as Virginia Gov. Glenn A. Youngkin issues a notice of the special election of a replacement to serve out Rep. McEachin’s new term that will begin Jan. 1.

Rep. McEachin, who served three terms, was elected to a fourth term three weeks before his death, defeating Republican Leon Benjamin Sr. in the Nov. 8 balloting, and that means the winner of the special election could serve two years before having to seek re-election in 2024.

There is speculation that the governor could set the election for some time in February, in part to accommodate Virginia’s new requirement that 45 days be set aside for early voting.

Delegate Bagby, Sen. McClellan and most others who might jump into the race would face off early in the process in vying for the Democratic nomination, considered crucial as the district is considered a stronghold for the party.

Expectations are that the party would hold a so-called “firehouse” primary for party members to choose the winner. Based on the timing, those who previously planned to run for a legislative seat would likely still have time to get into their race if they do not win the nomination.