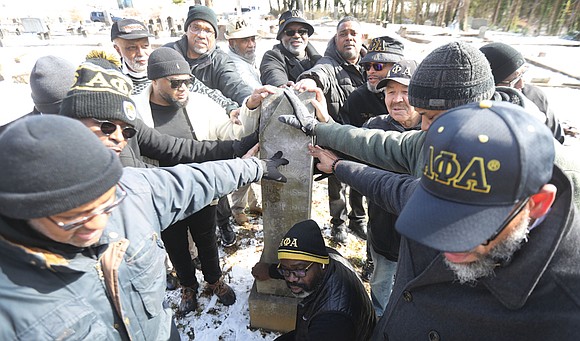 Members of the Virginia Association of Chapters of Alpha Phi Alpha Fraternity gather recently at Evergreen Cemetery at the family gravesite of Joseph Endom Jones and Rosa Kinckle Jones, parents of one of Alpha Phi Alpha Fraternity’s seven founders, Eugene Kinckle Jones. The Jones family, which had long associations with schools that became part of Virginia Union University, lived in Richmond in the late 1880s and early 1900s. Photo by Regina H. Boone

Beginning next month, members of Alpha Phi Alpha Fraternity will keep up the family gravesite of one of the fraternity’s founders in historic Evergreen Cemetery in Richmond’s East End.

The fraternity also wants to install a historical marker at the site.

Tyler D. Parker, a member of Xi Delta Lambda Chapter of Alpha Phi Alpha Fraternity, the Henrico graduate chapter, is manager of the volunteer project at Evergreen Cemetery, where the parents and brother of national founder Eugene Kinckle Jones are buried.

Mr. Jones, who graduated from Virginia Union University in 1905, attended graduate school at Cornell University, where he was one of the “Seven Jewels,” as the founders are known, of the nation’s first collegiate Black Greek organization on Dec. 4, 1906.

He also helped organize the fraternity’s first three chapters after Cornell, including Gamma Chapter at VUU in 1907.

“We knew the founder, Eugene Kinckle Jones, was from Richmond, but we didn’t know his parents were buried here,” Mr. Parker told the Free Press. “Once we found the site was here, the drive (among fraternity members) to preserve the site just grew ... because of the significance of this family to our fraternity and their historical significance in Richmond.”

In addition to his work with the fraternity, Eugene Kinckle Jones, the couple’s younger son, went on to serve as the first executive secretary of the National Urban League in 1918. He organized Urban League offices in 40 cities to help eliminate barriers to Black employment, expand vocational learning opportunities for young people and to boost Black membership in previously segregated labor unions. His expertise and advice was sought after and he served as part of President Franklin D. Roosevelt’s “Black cabinet.”

He was born July 30, 1885, in Richmond to Joseph Endom Jones, a formerly enslaved man, and Rosa Kinckle Jones, a free woman, both from Lynchburg.

“At the time, there were very few educated Black Americans coming out of slavery,” Mr. Parker said.

Shortly after the Civil War, Joseph E. Jones attended Rich- mond Theological Seminary in Richmond and then moved to New York, where he graduated from Madison University, now Colgate University, in 1876. He returned to Richmond to become a professor of Greek and church history at the seminary, which later became Virginia Union University, and served as a minister at Bethesda Baptist Church near Petersburg.

He was a major leader in the Baptist Church among Black people in Virginia, and was said to have installed more pastors than any other Black man in America, according to newspaper accounts at his death in 1922.

His wife, Rosa Kinckle Jones, was among the first women to graduate from Howard University’s Normal School in 1880. She became one of the first African-American teachers in the Lynchburg public school system, and after marrying in 1882, came to Richmond where she was in charge of the music department for nearly 40 years at Hartshorn Memorial College, a school on Lombardy Street for African-American women that also became a part of VUU. She died in 1932.

The couple’s older son, Henry Endom Jones, was hurt while playing in a football game at VUU and never fully recovered, according to a Jones family history on the VUU website. He died in 1912 at age 30 and is buried with his parents in the family plot at Evergreen Cemetery.

Last fall, Mr. Parker began researching Eugene Kinckle Jones and “I was intrigued,” Mr. Parker said. “I began to connect the dots with his family” and learned his parents and brother were interred at Evergreen.

Eugene Kinckle Jones, however, is buried in Flushing, N.Y., where he and his wife and two children lived for many decades. He died in 1954.

Mr. Parker said John Mitchell, a community ambassador with Enrichmond Foundation that oversees Evergreen Cemetery and the great-great nephew of fiery Richmond Planet newspaper editor John Mitchell Jr., helped him locate the Jones family gravesite, which was not far from the plots where Mr. Mitchell and noted businesswoman Maggie L. Walker are buried.

A small group from the fraternity visited the Jones gravesite in December, but their elation at being there was tempered by the conditions of the grounds.

“When we found the plot, it was clear that a tree had fallen on a retaining wall. The tree had been cut down, yet the stump remained,” Mr. Parker said. “Plus, there was a lot of brush and growth surrounding the family gravesite. Everything had fallen into disrepair and was in need of cleaning,” he said.

Mr. Parker sent an email to fraternity brothers and posted a picture of the site on social media. The response, he said, was tremendous. “They wanted to get involved in preserving the site,” he said.

Alphas from several area chapters now are committed to cleaning the obelisk and monuments on the Jones family site, putting down fresh top soil and planting sod or new grass seed and possibly installing a new fence around the site.

“We celebrate Founders Day on Dec. 4, and I can see us celebrating it right there,” Mr. Parker said.

He said the group also plans to submit paperwork for a historical marker to be installed at the site so that visitors will know the accomplishments of the Jones family and their connection to the founding of Alpha Phi Alpha Fraternity.