State of the City 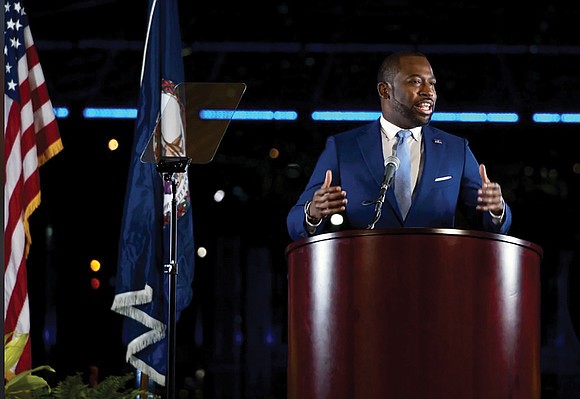 Mayor Levar M. Stoney delivers his State of the City address Tuesday evening to a small, in-person audience at Main Street Station. The address was livestreamed to a wider audience on the city’s Facebook page. Photo by Regina H. Boone

Bigger investments in public safety – including the creation of a gun buyback program as part of a strategic effort to quell the surge in gunfire and violence.

Increased investment in affordable housing, along with fresh attention to ending squalid conditions in rental properties.

And continued efforts to push development that creates jobs and opportunities for all Richmonders to thrive.

Those are among the priorities Mayor Levar M. Stoney highlighted Tuesday in his annual State of the City address as he laid out his vision for improving the quality of life for residents in officially starting his sixth year in office.

“If I could summarize this administration’s approach, I’d say, ‘We are about the fix.’ And I can say with confidence we are making progress,” the mayor said in the nearly 40-minute address that brimmed with optimism.

Public safety and housing were the main focus of his remarks to the in-person audience limited by the pandemic to fewer than 100 city officials and community leaders. The address also was livestreamed to a wider audience watching on the city’s Facebook page.

Despite the continuing boom in construction and the rebound in hiring that has led to a plunge in unemployment, the mayor said public safety and programs aimed at preventing the conditions that breed violence must remain a major focus after a year in which the city reported 93 homicides, the most in nearly 20 years, with hundreds of others treated for gunshot wounds.

In a bid to reassure the public the issue is being addressed, he said one new tool in the city’s violence-prevention arsenal would involve an investment of $500,000 in apparently the city’s first no-questions-asked buyback program of operable weapons.

Despite a lack of evidence that such programs make a difference, the mayor credited two City Council members, Ann-Frances Lambert, 3rd District, and Stephanie A. Lynch, 5th District, and Police Chief Gerald M. Smith with pushing the idea as a complement to the Richmond Police Department’s own efforts that last year led to the seizure of more than 900 illegal guns.

While details of the gun buyback are still being developed, Mayor Stoney also cited other research-based efforts for prevention services, including the plan announced last week to provide $1 million to the nonprofit NextUp RVA to support community-based programs providing after-school, mental health and other wraparound support services.

The mayor noted that the city also has hired a community safety coordinator to work with residents to create programs that can reduce violence and Chief Smith’s plan to hire three former prison inmates to help interrupt violence by holding conversations with those prone to such action.

The mayor also repeated his promise to include significant pay raises for police officers and firefighters, all under stress from high turnover and the lowest pay in the Richmond area. He did not mention pay hikes for other underpaid city workers. He noted Chief Smith also is seeking to boost retention of current officers and recruitment of new officers and is working on a package of incentives to make his department, now suffering from depleted morale, more attractive.

“It’s simple: In order to prosper, our city needs to be safe,” Mayor Stoney said. “That means we must be tough on violent crime and tough on the root causes of crime.”

Still, the mayor said he is not backing off his support for the creation of a civilian review board to hear complaints about officers. He said he has brought in an expert, Dr. William “Will” Pelfrey Jr., a professor at Virginia Commonwealth University, to ensure the final design “fits the needs of Richmond.”

On the housing front, another sector he linked to public safety and quality of life, he said the city is revving up its inspection staff and will be cracking down on owners and landlords who fail to maintain their property.

“I won’t sugar coat it,” he said. “We’ve got apartment complexes in Black and Brown neighborhoods with infestations of rodents, roaches and bedbugs. We’ve got children playing on floors soaked in wastewater. We have families sleeping under ceilings covered in mold. And we’ve got tenants afraid that if they complain, their landlords will raise their rent or evict them.”

In addition, he said the city is focused on creating affordable, dignified housing, citing the previously announced investment of $10 million a year in the city’s affordable housing trust fund and in the creation of new homes in Creighton Court in the East End and Highland Grove in North Side.

He noted that four new recreation centers will be built in the coming years, a new program to subsidize child care will be rolled out and a new effort to create a universal pre-kindergarten program will be created in the city to ensure every child gets a good start.

Mayor Stoney also noted his administration has initiated a Triple A business program to provide support to small businesses and start-ups and is seeking to open new opportunities in pushing for a mixed-income, mixed-used development and a new baseball stadium on the land where The Diamond baseball stadium now stands.

He also noted the city is starting the process of redeveloping about 20 acres in Downtown, from the Coliseum to City Hall, with a private developer’s pending replacement of the Public Safety Building representing the first step.

He also pointed to the coming $500 million investment planned by the CoStar real estate data firm on the riverfront that is to generate 2,000 new job in noting the city is sending a message that “Richmond, Virginia, is an exciting and attractive play to live, work and prosper.”

However, he expressed hope that Richmond voters will authorize a casino in urging the General Assembly not to block a second referendum for city voters to decide whether they want it.

Aside from internal problems of poverty and crime, the mayor said the pandemic remains a reality and he publicly called out new Gov. Glenn A. Youngkin for seeking to allow parents and their kids to spread disease in schools by making masks optional. Mayor Stoney called that “wrong and dangerous,” and a denial of the science supporting mask-wearing to defeat the pandemic.

Meanwhile, he said Richmond this year will be investing in a health equity program run by the city Health Department to help residents become healthier. Additionally, the city will be working with regional partners to address opioid addiction and unveiling the RVAgreen 2050 action plan to address climate change and environmental issues.

“We are tackling the issues that everyday Richmonders are facing, and we are bringing the fix,” he said. “We want families to thrive in our city. We are putting in the work today so that when our children grow up, they inherit a city filled with opportunity.”