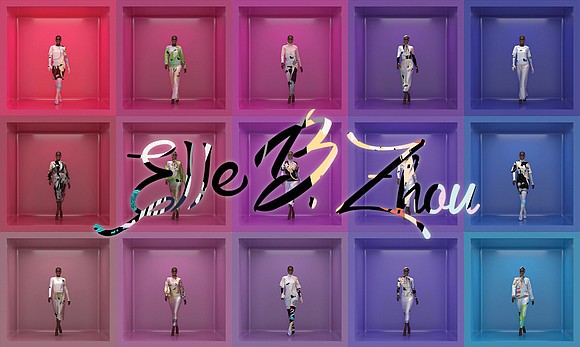 An image from the Elle B. Zhou relaunch in 2020. Courtesy image

From the pinnacles of the fashion world to a wrongful stint in prison and back, Elle B. Mambetov’s extraordinary personal journey has helped her emerge as a unique voice in the world of luxury fashion.

Half a decade ago, her label Elle B. Zhou appeared at Paris Fashion Week and her handbag collection at London Fashion Week. She was working with some of the largest retailers in the United Kingdom after a stint living in China.

The Texas-born designer, who got her first sewing machine at age 7, was one of fashion’s rising stars.

Then police officers knocked on the door of her London flat with questions. 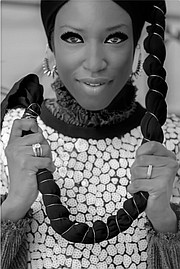 Photo courtesy of Elle B. Mambetov

Ms. Mambetov, a foreigner, was cooperative but, unsure of the country’s legal system, she never asked for a warrant. She was accused of fraud. In fact, Ms. Mambetov was the victim of an identity scam. A con man whom she first met at a fitness center had stolen her identity in a complex scam and charged some $1.3 million to her business. Arrested for the crime, he was charged by the Inner London Crown Court with six counts of fraud. Yet, he skipped bail and fled the country — all before Ms. Mambetov was detained by the police.

The same con artist had also claimed to be a representative of other celebrities in internet transactions, including Ed Sheeran and Taylor Swift.

Despite knowing she was not responsible for the crime, Ms. Mambetov was kept in prison for more than two years because she was deemed a flight risk. Much of that time was spent at HMP Bronzefield, a maximum-security women’s prison near London, where Ms. Mambetov, who is Black, said she experienced extreme racism.

“America has its own racism and issues but, what I experienced in the United Kingdom was a very different level and widely spread form of racism,” she told Religion News Service. “There is often an eerie silence about it and often people show their attitude not with their words but their actions. In the prison system, I was treated through a racial lens.”

Sometimes in her cell, she said, she contemplated suicide. At other times, she dreamed of a triumphant return to the world of fashion. She documented much of her ordeal in a book, “A6347DW: American Captive.”

Raised a Christian, Ms. Mambetov was surprised by the lack of support she received from her faith community. “When I went into jail, every Christian other than my mother abandoned me,” she said, adding that she wrote letters to every Christian she knew and they “did nothing.”

“Christians who had been in my life were completely gone,” she said.

Eventually, she said, her mother’s letters to Congress attracted the attention of the U.S. government to her case, which contributed to her release. Ms. Mambetov is seeking legal action due to her ordeal and says she still suffers from post-traumatic stress disorder.

Upon her release, she was told she would have no criminal record and would be given a one-way ticket out of the United Kingdom. She chose Los Angeles.

In California, Ms. Mambetov took up residence at an Airbnb near Los Angeles International Airport for a time. The owner of the property knew all about leaving a country under duress. Selim Mambetov, a Crimean Tatar, had left Ukraine not long after Crimea was seized by Russian military forces in 2014. His father had been a Crimea language media personality and before the Russian occupation he had pursued a creative career of his own. Today, he works on solving Los Angeles’ large homeless problem. The two soon fell in love.

“As a Christian, I was taught you couldn’t marry a non-Christian. After prison, after the way which so-called Christians, except my mother, treated me, I didn’t care what people thought about a Christian marrying a Muslim,” she told RNS.

Ms. Mambetov converted to Islam not long after, she said, as part of a personal spiritual journey that started when she was still in prison. She returned to the world of fashion but with a focus on the modest fashion movement popular with many Muslim consumers.

She revived her brand Elle B. Zhou during Ramadan 2020. Her recent womenswear collection, titled “Let the Stars Be Our Guide,” included a constellation map of the stars over Mecca and featured Egyptian actress Huda El Mufti.

For a brief time, Ms. Mambetov also ran an Elle B. Zhou luxury boutique at the Beverly Center in Los Angeles. Amid such retail outlets as Burberry, Tiffany’s and Fendi, her brand offered a different aesthetic. With Quranic verses on display, Allah diamond necklaces for sale and no music pumping through its speakers, Ms. Mam- betov hoped to put customers in a more reflective mood.

“I wanted to create a space that was more deeply rooted, that was inclusive of all and that was also halal,” she said. Still, the store’s foot traffic included customers of all stripes, from Muslim Americans to Hollywood celebrities.

A number of factors, including hidden fees, differing visions for the space and increasing street crime in Los Angeles, led Ms. Mambetov to close the shop. She now hopes to open a department store focused on modest fashion somewhere in the Beverly Hills area. She also plans to open a boutique in Qatar, where she maintains an office and has partnered with the online luxury shopping boutique Farfetch.

“I have been traveling internationally my whole life without issue. But, the first time I went to travel with a hijab I had a different experience. I was pulled aside. I told the people who were interrogating me that this had never happened to me before but they insisted it was ‘routine questioning’ and noth- ing abnormal,” Ms. Mambetov said. When she arrived at her destination, she discovered a Rimowa suitcase she had been traveling with had been broken by the Transportation Security Administration.

She hopes her work can be a bridge between two very dif- ferent concepts of fashion. For a designer who describes herself as the “Lady Gaga of modest fashion,” her line includes vibrant colors and lighthearted use of Arabic script.

“Most people, when they suffer the setbacks in their industry or life, they move on,” said Selim Mambetov, her husband. “They don’t go back and start from nothing like she has. And not only that, she has been able to jump even higher than before."