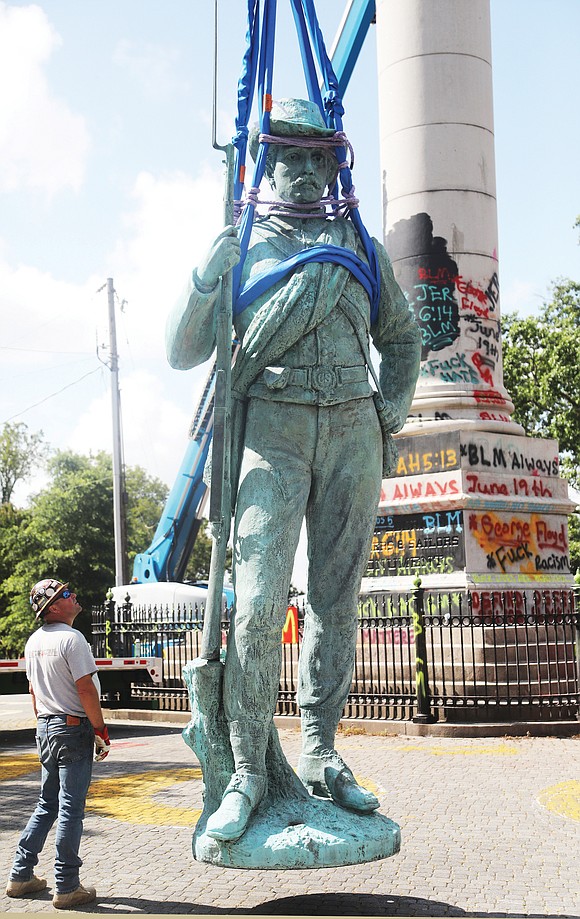 Erected in 1894, the Confederate Soldiers and Sailors Monument in Libby Hill Park is taken down on July 8, 2020, along with other city-owned Confederate statues. Photo by Regina H. Boone

What do you do when you don’t want to make a difficult decision?

Let someone else make it.

That’s the tack that outgoing Gov. Ralph S. Northam and Richmond Mayor Levar M. Stoney are taking in regards to the Confederate statues — long-standing symbols of white supremacy and slavery — that have been removed from Richmond’s landscape in the past 18 months.

Capping several months of behind-the-scenes talks, Gov. Northam and Mayor Stoney jointly announced their plan to pass the decision-making about the statues to two museums, the Richmond-based Black History Museum and Cultural Center of Virginia and its partner, The Valentine museum of Richmond history.

“Now it will be up to our thoughtful museums, informed by the people of Virginia, to determine the future of these artifacts, including the base of the Lee Monument which has taken on special significance as protest art,” Gov. Northam stated.

As he prepares to leave office on Jan. 15, this is an opportunity to finally eliminate any state responsibility for a statue that he stated was designed to celebrate “our country’s tragic division and the side that fought to keep alive the institution of slavery by any means possible.”

Mayor Stoney, whose administration has spent more than a year unsuccessfully determining what to do with at least 10 city-owned Confederate monuments that were taken down, added that “entrusting the future of these monuments and pedestals to two of our most respected institutions is the right thing to do.”

“They will take the time that is necessary to properly engage the public and ensure the thoughtful future uses of these artifacts while we reimagine Monument Avenue, focus on telling our history fully and accurately in places like Shockoe Bottom and lift up residents throughout the city,” he said.

Talks about this approach began after the Lee statue was removed in September, the Free Press was told.

The city had advertised and received 23 bids, most seeking donations of its statues. But as one person involved in the recent talks put it, “There was concern that these statues could end up becoming the basis for a Confederate theme park, and no one wanted that.”

The plan that is being advanced, and which has the full backing of a Richmond City Council that is equally reluctant to make a decision on the statues, calls for the city and the state to keep the items in storage while the museums engage the public and other institutional partners in considering what to do next.

City Council is now rushing to take the first step to implement it: To introduce and approve an ordinance to accept the title of the state-owned Lee statue before Republican Gov.-elect Glenn A. Youngkin takes office Saturday, Jan. 15.

The city’s governing body also is preparing to pass titles to the Lee statue and the city’s Confederate statues and bases to the Black History Museum, which is to take the lead role but would not have to pay for storage or care until a decision is made.

The museums, who are promising robust public engagement and inclusion of those parties that submitted bids to the city for the statues, are being granted up to five years to come up with a solution to the thorny problem of what do with the relics.

While no promises have been made, the museums are considering asking the city for some funding to cover the costs of engaging the public.

Many have noted the irony of having a Black institution leading the process of determining the fate of statues erected by those who only meant ill to the Black community.

Marland Buckner, interim director of the Black History Museum, is eager to take on the challenge as a way to raise the museum’s profile, particularly as a cultural institution.

The Black History Museum and Cultural Center of Virginia on West Leigh Street in Jackson Ward.

“Our institution will take very seriously the responsibility for managing these objects in ways that ensure their origins and purpose are never forgotten, which is the glorification of those who led the fight to enslave African Americans and destroy the Union.

“But we believe with this responsibility also comes an opportunity to deepen our understanding of an essential element of the American story: The expansion of freedom,” he said in a statement.

He pledged there would be “a sustained, reflective and broad-based community engagement process that will inform decisions made about the future of the objects in this collection.”

William J. “Bill” Martin, The Valentine’s director, agreed that public engagement will be a continuing focus, including initiatives to seek public input at festivals and events.

For example, he noted that The Valentine is a partner in a project this year to create light shows in Richmond focusing on racial justice, and he said those shows would provide an opportunity to collect information from the public.

Along with the Lee statue, the Black History Museum is to gain title to the statues and pedestals of Confederate Gens. J.E.B. Stuart, Stonewell Jackson and Williams Wickham, Confederate President Jefferson Davis and oceanographer and Confederate Navy Commander Matthew Fontaine Maury.

The Black History Museum also would get a copy of a Confederate cannon; a monument to Confederate cavalryman Fitzhugh Lee; a statue of slavery and Jim Crow advocate Joseph Bryan; a statue to a Richmond Confederate unit; and a statue to Confederate soldiers and sailors that was on Libby Hill. As yet, the list does not include the statue that is a grave maker of Confederate Gen. A.P. Hill, located at Hermitage Road and Laburnum Avenue.

A specialist in civic engagement and laws pertaining to cultural heritage, Mr. Werkheiser called it significant that the transfer is being made without any strings attached.

“What’s really great about this is there are no geographic or strategic limitations placed on what can happen,” he said. “I can tell you honestly, that both museums are entering this situation with completely open minds.”