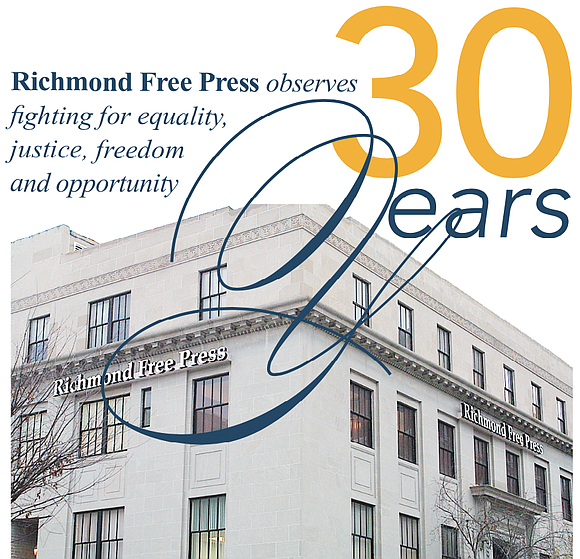 The Richmond Free Press building at 5th and Franklin streets in Downtown is the third home of the newspaper in its 30-year history. The newspaper started in a building at 201 W. Broad St, and later moved to 101 W. Broad St. Seeking higher visibility and greater public access with each move, the company purchased and relocated to its current building in December 2001. Free Press file photo

From its start, the Richmond Free Press has relentlessly sought to impact and improve life for Black Richmonders on a variety of issues.

The award-winning newspaper is marking its 30th anniversary this year, and since the time the inaugural edition hit the streets of Richmond on Jan. 16, 1992, the Free Press has stayed on the front line championing causes ranging from education and health care to employment and racial justice.

Achieving this goal every week has been no easy task. There have been sporadic protests from prospective advertisers who refused to buy ads or to provide the newspaper in stores for readers. There was the effort by a small group of ministers to “shut the paper” down after disagreeing with editorials. Still, the Free Press climbed the mountain.

As the Free Press observes this milestone anniversary, it continues to honor its mission to “empower its readers by contributing to the balance of news reporting and commentary in the Richmond area” and “to educate its readers about important issues touching their lives and to motivate them to be fully heard on these issues.”

From reporting about the COVID-19 pandemic and its sweeping and sometimes tragic impact on the Richmond community to coverage of political events in City Hall and the state’s legislative chambers, the Free Press has been there without fear or favor.

“Newspapers are empowered by the Constitution to be truth-tellers,” observed Jean Patterson Boone, who took the leadership reins as publisher of the Free Press in June 2014 after the death of her husband, Raymond H. Boone Sr., a spirited and feisty newspaper veteran who founded the Free Press after a long career as an executive with the Baltimore-based Afro-American Newspaper group.

“We’ve come a long way,” said Mrs. Boone, noting that people have come to appreciate the Free Press, its mission, its independent role among Virginia’s news media and its adherence to a deep belief in the First Amendment.

The Free Press was launched with the mission to “fan the expression of ideas about public policy and, in the process, to encourage wide-open, uninhibited debate.”

“It is our view that the lack of respect for the First Amendment has frustrated free expression in Richmond — especially in the Black community — and that the entire community has suffered by failing to allow society to benefit from thoughts and ideas of the people," the newspaper's mission statement reads. “The objective of the Free Press is to work mightily to reverse this counterproductive situation.”

That commitment to public discourse was foundational in the life and motivation of the newspaper’s founder. Mr. Boone grew up in rural Suffolk, where racial segregation ruled supreme and the idea of a racial minority helping run a newspaper was an unspeakable thought. As a young high school student, he touted a brave idea: To become a journalist.

He worked part time for the Suffolk News-Herald, covering sports at Black high schools. He went on to earn a journalism degree at Boston University and later joined the staff at the Baltimore Afro-American. He first came to Richmond in 1965 as editor of the Richmond Afro-American. 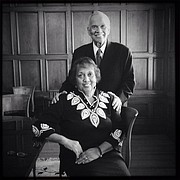 Richmond Free Press founder Raymond H. Boone Sr., and his wife, Jean Patterson Boone, the current publisher, brought their dream to Richmond in 1992. They were photographed together in the Free Press Board Room on April 24, 2014, just weeks before his death on June 3, 2014.

During the last 30 years, the Free Press has published major stories about housing and employment discrimination; pushed elected officials from governors to mayors and City Council members to increase public spending with Black-owned and minority-owned firms; and put a spotlight on an area Wendy’s franchise that fired three young Black employees who refused to take out their braids despite Virginia law accepting the style as a proper form of hair restraint for food workers. The story, and the reversal of the anti- braid policy by Wendy’s corporate headquarters, was picked up by the New York Times, which cited the Free Press.

The Free Press has pushed through the years to hold politicians, judges and other public officials accountable.

In 2004, the Richmond Free Press exposed racist comments Richmond General District Court Judge Ralph B. Robertson Mae in an online chat room about African-American defendants, civil rights leader Martin Luther King Jr. and the Civil Rights Movement, which forced the judge to resign after 19 years hearing criminal cases and to apologize to the Richmond community. The judge died in 2006. The Free Press and writer Jeremy M. Lazarus, who has worked at the newspaper almost since its inception, were recognized by the Old Dominion Bar Association and the Virginia Trial Lawyers Association for investigative work exposing such discrimination.

During the widespread “Occupy Wall Street” demonstrations in 2011 pointing out the income and wealth gap between the nation’s wealthiest 1 percent and the rest of the population, local protesters were ordered evicted by then-Mayor Dwight C. Jones from their make-shift camp in Downtown Mr. Boone, in solidarity with the demonstrators’ cause, invited them to set up camp on the lawn of his South Side home -right next door to the mayor’s residence - where they celebrated Thanksgiving with a large outdoor feast.

For nearly a decade, the Free Press called on the Washington NFL team to change its racist name and refused to publish the offensive moniker in its news or editorial columns. In July 2020, team officials announced the franchise would drop the name. Other news organization began calling the team by the name assigned to it in the Free Press - the Washington football team.

“The most consequential, I would have to say, are the editorials and stories that help educate voters and government decision-makers about the evils of the Confederate symbols on Monument Avenue and throughout the Commonwealth,” Mrs. Boone said.

In summer 1992, the newspaper brought attention to the use of Confederate symbols on aircraft and uniforms of the Virginia Air National Guard. When then-Gov. L. Douglas Wilder, the learned about it, the Confederate symbols were promptly removed, Mrs. Boone recalled.

Mrs. Boone said she was “personally taken aback by the racism” she confronted when she began as the newspaper’s advertising manager. She said she could not count the times she was turned down by advertisers who considered the Free Press “in the ‘miscellaneous’ category of outlets, for which there was no money left.”

The range of potential advertisers may change by name to a degree, but not by attitude, she added. “In short, it has been a challenge because values. And our readers are still demanding to be valued by hesitant advertisers,” Mrs. Boone said.

The Free Press has kept the presses rolling with a small loyal team, winning accolades from peers and competitors during the past 30 years for its range of impactful articles, editorials, photographs and community service.

Mrs. Boone echoes her late husband when talking about the future of the Free Press and what challenges and opportunities are ahead.

The priority, she said, is “delivering news that our readers can use, presenting commentary, editorials and ideas that inspire citizens to participate in their government, particularly at the local and state level, and encouraging robust debate through the Letters to the Editor columns.”

The newspaper’s inspirational focus of encouraging volunteerism by featuring a Free Press Personality each week “is contributing to the betterment of our community,” Mrs. Boone said.

“The foremost challenge is to remain vital to the health and growth of the Richmond community, especially the most vulnerable,” Mrs. Boone said. “Our pledge is to remain true to our mission.”