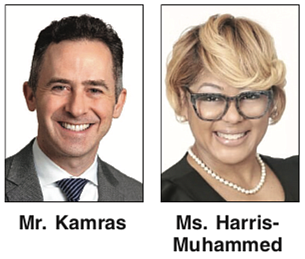 After months of quibbling, the Richmond School Board approved a $356.6 million budget Monday night that provides a 5 percent raise for teachers and other schools employees, but eliminates money for new student laptops, instructional contracts and cellphones for employees.

The 2022-23 spending plan, approved by a unanimous vote of the board, is $6 million less than the budget proposed by Superintendent Jason Kamras. But it maintains funding for two key central office positions a majority of the board sought to eliminate late last week.

It also added $1.6 million for the Richmond Virtual Academy, which would provide funding for about 30 teachers during the next school year for students engaged in virtual learning. That’s less than half of the current 70 teachers.

Overall, the RPS budget seeks $201 million from the City of Richmond, or about $16 million more than the current school budget.

The board and school administration has been at odds in recent weeks over several budget issues, with the School Board rejecting Mr. Kamras’ budget plan on a 5-4 vote at its meeting on Feb. 22.

Then late last week, Board Chairwoman Shonda Harris-Muhammed said a majority of the board wanted to eliminate RPS’ chief operating officer and the vacant cabinet-level position of chief student wellness officer.

Angry parents emailed School Board members during the weekend, demanding they approve a new budget as well as allow Mr. Kamras to do his job without interference.

More than 50 parents, students and area residents held a rally before Monday’s School Board meeting at River City Middle School holding signs that read “Let Kamras Lead,” and urging the board to adopt a budget.

During more than an hour of public comment before the board voted, parents accused the board of micromanaging Mr. Kamras and impeding progress.

Mr. Kamras told the board that he couldn’t effectively serve as superintendent without a leadership team, including a chief operating officer.

“It’s simply not tenable and would set me up to fail,” he said. “Please don’t tie my hands behind my back and expect me to perform miracles.”

“Our students are facing unimaginable trauma from the pandemic and from the myriad of challenges they faced before COVID-19, challenges that only worsened over the last two years,” he said, including, “gun violence, housing instability, poverty, and more.”

During the public comment period, parents told the board that their children need the leadership of a chief wellness officer after enduring the two years of COVID-19 and virtual learning, as well as wearing masks every day during in- person learning.

Parents also called for funding the Richmond Virtual Academy, which currently serves about 550 students from families that have opted not to return to in-person learning. Some students have health or other challenges that prevent them from physically attending classes, parents have noted.

Mr. Kamras said the academy is funded entirely by federal stimulus money and that RPS needs to wean itself from reliance on the federal money, which will run out in mid-2024. Because of that, his budget proposal cut the virtual academy’s teaching staff from 70 to 10 during the 2022-23 school year.

But the budget approved by the board Monday night included funding for 30 positions, which is 20 more than Mr. Kamras’ plan provided for, although only half of the current number of students will be served.

Tawanna Tyler told the board that the virtual program provided a learning environment in which her 6-year-old son, Marcus “M. Jay” Spencer Jr., could be successful. She said he has Kabuki Syndrome, a rare disorder characterized by multiple abnormalities, including growth delays and varying degrees of intellectual disability.

She said her son is doing well through Richmond Virtual Academy.

“We need to continue funding the program,” she said.

The approved budget plan was sent to Mayor Levar M. Stoney, who is slated to present an annual budget for the city, including the city’s contribution to RPS, on Friday, March 4.