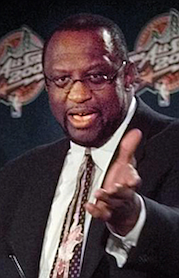 Bob Lanier, who went to the Naismith Basketball Hall of Fame twice — once for his talents; once for his hard-to-believe sneakers — died Tuesday, May 10, 2022.

Mr. Lanier was 73 and had been treated for bladder cancer since 2019.

Standing 6-foot-10 with boulder shoulders and a thick frame, Mr. Lanier was dominant on both the college and NBA courts.

The Buffalo native led St. Bonaventure to the NCAA Final Four in 1970 and was the NBA’s first overall draft pick (by Detroit) that same year.

Mr. Lanier was known for his ferocious play on the court and friendly nature when not playing. That rang true in 1986 with his hilarious role in a Miller Lite TV commercial with Boston star Dave Cowens.

Mr. Lanier told Cowens that he (Cowens) had achieved “the two biggest feats” in the NBA. Cowens countered by saying “no, those are the two biggest feets.” At that moment, Lanier leaned back in his chair and revealed his oh-my-gosh size 22 Converse shoes.

Early in his career, Mr. Lanier donated one of his boat-sized kicks to the NBA Hall of Fame. A bronze version of his shoe has been on display for decades.

“Most people can put both of their feet into one of my shoes,” said Lanier.

For some 30 years following retirement, Mr. Lanier worked as a special assistant to NBA Commissioner David Stern as part of the NBA Cares Global Ambassador youth program. He traveled the world assisting youngsters in need of guidance.

The big man was formally inducted into the Hall of Fame in 1992 — but his sneakers beat him to it.