Spotlight on board president of 1708 Gallery 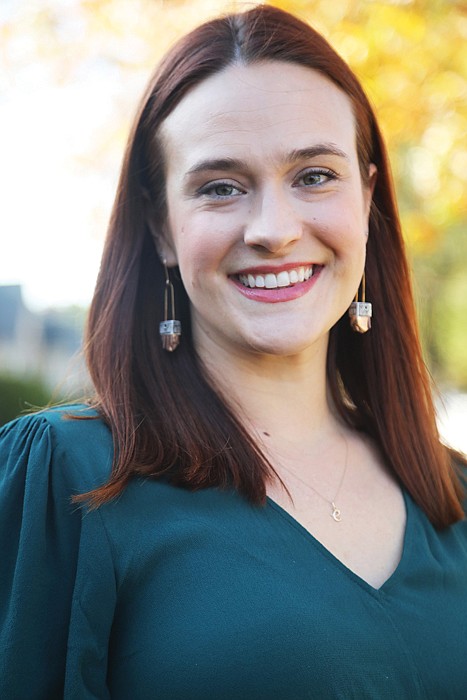 By leading one of the oldest artist-run galleries in the nation, Haley M. McLaren is helping to illuminate Richmond’s independent art scene.

As president of 1708 Gallery’s board of directors, Mrs. McLaren deftly applies the gallery’s mission to support independent Richmond artists during a time of change for the group and the city’s art scene in general.

“The 1708 family is phenomenal, and I felt encouraged, supported and inspired by those who served in leadership roles before me,” says Mrs. McLaren when asked why she accepted the position.

The gallery’s website presents a fascinating history of its founding in 1978 by emerging Virginia Commonwealth University artists described as risk-takers.

“They founded 1708 Gallery, a nonprofit arts organization run by artists, in a flood-damaged Richmond warehouse at 1708 East Main Street, where they showcased an exciting mix – alternative art forms, large-scale pieces, important works – not driven by commercialism,” reads its website.

Hailing from Abingdon, Mrs. McLaren joined 1708 at its current location on West Broad Street in 2008 during its “In- Light” event. Mrs. McLaren was recruited by 1708 leader and emeritus councilmember Suzanne Hall to help serve on its steering committee, as the group worked to showcase light-based artwork from the community’s artists.

The atmosphere and community Mrs. McLaren found at 1708 during “InLight” inspired her to volunteer for other gallery events. So impressive was her work that she was invited to join 1708’s board.

“I immediately felt welcome and at home in a community of artists and volunteers who shared a passion for promoting and fostering unique, contemporary art and sharing it with the community,” Mrs. McLaren says.

Mrs. McLaren currently is focused on the 2022 “InLight” festival, scheduled for Nov. 18-19 at Bryan Park. During the event, artists will create works that engage with and expand upon the histories and current activities that comprise Bryan Park, according to 1708’s website. These include Gabriel’s Rebellion and its legacies, disc golf and soccer, bird watching, the park’s environmental and ecological life, the park’s wildlife and native flora and fauna.

In balancing her volunteerism with her job as director of advancement at the Valentine Museum, Mrs. McLaren seeks to ensure 1708 Gallery’s future success and sustainability by helping it establish a permanent space in Richmond, including purchasing the building that it has rented at 319 W. Broad St. for more than two decades.

Mrs. McLaren ultimately hopes to ensure that 1708’s and the Valentine’s mutual interests and ideas are shared with and available to Richmond—uninhibited by financial needs—to illustrate and highlight their full potential.

“Both organizations have great projects and inspiring future plans, and the Richmond community has amazing supporters and cheerleaders,” Mrs. McLaren says. “We just need to work on aligning passions, visions and resources.”

Meet an advocate for the indie arts in Richmond, Haley M. McLaren:

Occupation: Director of advancement, The Valentine.

Date and place of birth: May 5 in Abingdon.

1708 Gallery is: One of the oldest artist-run independent art spaces in the country, and a safe, supportive space for artists to create new artworks such as video projections, large installations and more.

When and why founded: Founded in 1978 at 1708 E. Main Street by a group of artists looking for a space to feature experimental, risk-taking contemporary art that functioned outside of a commercial gallery world.

Number one goal as board president: Garner more support for the gallery’s CATALYST campaign and get the gallery as close to the fundraising goal as possible while also sustaining support for existing operations, programs and exhibitions.

Strategy for achieving goals: Embracing some great framework from the gallery’s strategic plan and thinking about creative ways to engage community partners and rally new and existing funders behind the gallery’s mission and future plans.

InLight 2022 is: 1708’s annual exhibition of light-based public art. It is free to attend, and this year marks the 15th InLight! It’s always one of my favorite fall events in Richmond and appeals to so many different people.

Significance of the location for InLight 2022: The location of InLight changes every year. Each location sparks inspiration for the art installations, presents new op- portunities for partnerships and invites attendees of all ages to explore different areas throughout the city. This year’s event is at Bryan Park and the 15 artists and four community partners have created works that connect to the park’s history and its present day role in the community.

Why art moves me: Art can be created, interpreted and influenced by so many different perspectives, mediums and ideas.

Favorite artist: Suzanna Fields – Her work is beautifully complex, unique and deeply inspired by nature. She also is one of my dearest friends.

A perfect day for me is: I love a weekend day with no need to rush out the door, made even better with a morning walk for easy exercise, catching up with a friend or a stroll to Carytown for coffee and/or breakfast with Matt and Eve. I also cherish a day that I can spend quality time with my daughter and fit in some me-time to casually tackle a project around the house, catch up on work or just sit quietly and recharge for a bit while she takes a solid nap.

What I am continuing to learn about myself during the pandemic: The pandemic has offered a unique opportunity for greater introspection – good and bad. While there have been sad times, scary times and lots of uncertainty, I’m hopeful that one silver lining that will stick with me and continue to shape me is my awareness of the multitude of perspectives that exist and the importance of finding meaningful connection with others, even if they don’t completely agree with you.

Something about me that people may not know: I’m a big crafter and generally love most things that sparkle but absolutely detest glitter!

A quote that inspires me: “If you don’t like the road you’re walking, start paving another one.” — Dolly Parton

My friends describe me as: Creative, committed, thoughtful, kind (and I hope funny).

At the top of my “to-do” list: Organizing my desk at work and making a comprehensive list of action items I need to tackle (or delegate). I also really need to address my personal email inbox.

The best thing my parents ever taught me: Respect your elders.

The person who influenced me the most: My husband (it’s cheesy, but true) has been a huge influence in my life and continues to be every day. Our relationship is rooted in friendship, love and respect, and we have grown so much together and as individuals since we met nearly 15 years ago (not to mention weathering a pandemic, fertility challenges and now journeying through parenthood). He encourages and challenges me in so many ways (good and bad). He has one of the biggest hearts I know, and we make a great team.

Book that influenced me the most: “Small Great Things” by Jodi Picoult really stuck with me after reading it at the beach several years ago.

What I’m reading now: “All the Light We Cannot See” by Anthony Doerr has been on my nightstand for quite some time, but I’m more likely to read a board book with Eve these days.

Next goal: I want to help 1708 and The Valentine effectively meet their current capital cam- paign fundraising goals as soon as possible. Both organizations have great projects and inspiring future plans, and the Richmond community has amazing supporters and cheerleaders; we just need to work on aligning passions, visions and resources.