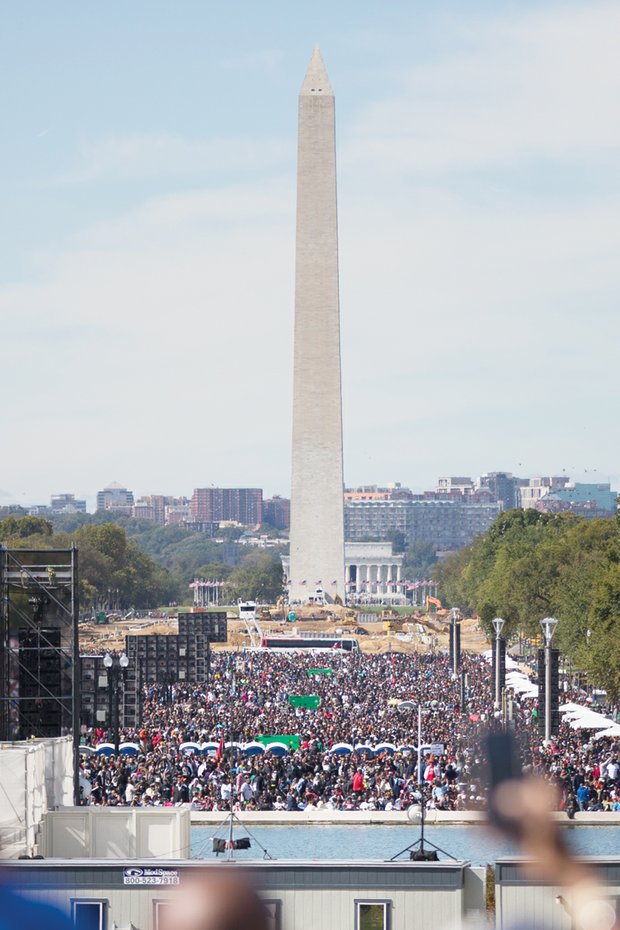 Million Man March 20 years later -
Throngs of people from across the nation flooded the National Mall in Washington for the Justice Or Else rally marking the 20th anniversary of the Million Man March. People of all ages, ethnicities, faiths and backgrounds were drawn to the capital for the event initiated by Nation of Islam leader Minister Louis Farrakhan. A number of speakers and activists addressed participants, calling for changes in the conditions that oppress African-Americans and other marginalized people. Coverage, B3.
By Jeremy M. Lazarus
Charlene C. Harris hoped to live out her years at 1600 Colorado Ave., the single- family brick cottage that she and her family have called home for 47 years.
But now the retired 68-year- old state employee is being told she must either purchase the two-bedroom home from her landlord, the Richmond Redevelopment and Housing Authority, or face moving.
“It’s a terrible situation,” she said. “RRHA has told me I have to put up $500 to begin the process and to get a mortgage by December. Otherwise, I would have to accept relocation.”
Like other public housing tenants of such homes, she feels caught in a Catch-22. Until she puts up the $500, RRHA won’t provide an appraisal that would let her know what the sales price would be so she could figure out if she could afford
Sandra Sellars/Richmond Free Press
Charlene C. Harris stands in front of her two-bedroom home in the West End. She has been told to buy it or face having to move. Location: 1600 Colorado Ave.
RRHA residents in ‘buy or move’ spot
the house on her fixed income of about $1,500 a month.
It is an ironic twist that RRHA is now marking its 75th