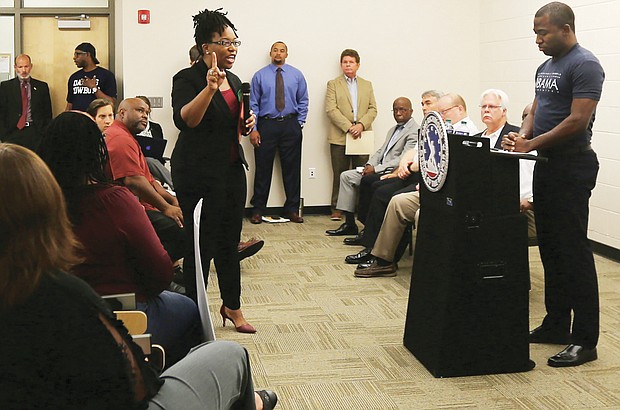 Princess Blanding, the sister of shooting victim Marcus-David Peters, confronts Mayor Levar M. Stoney at a July 26 community meeting about the death of her brother, who was shot by a Richmond Police officer on May 16.

Richmond Police officer cleared in May shooting death of teacher Marcus-David Peters, who was naked and unarmed

Justifiable homicide. That’s the ruling Richmond Commonwealth’s Attorney Michael N. Herring has applied to the bizarre and tragic case of 24-year-old Marcus-David Peters, the unarmed man who was fatally shot by a police officer last spring off of Interstate 95 while apparently suffering mental distress.

A local activist coalition and a victim’s family continue to question the details of the fatal shooting of 24-year-old Marcus-David Peters by a Richmond Police officer in May. Mr. Peters’ sister, Princess Blanding, and the Justice and Reform for Marcus Peters Coalition challenged the accuracy and transparency of the Richmond Police Department’s report on the fatal shooting by Officer Michael Nyantakyi at Mayor Levar M. Stoney’s Third District community meeting July 31.