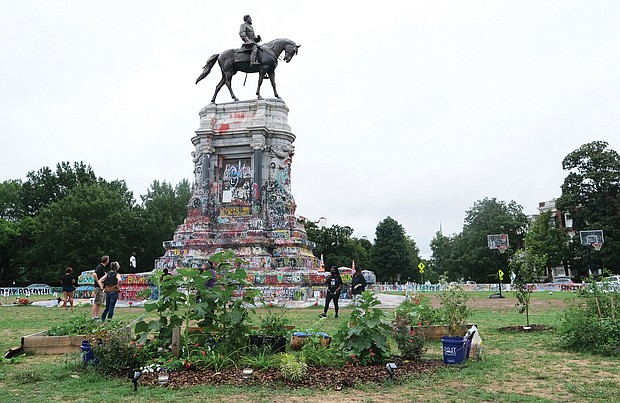 The sign placed months ago by demonstrators designated the circle around the Lee statue on Monument Avenue as Marcus-David Peters Circle apparently was sawed off and
removed early last Sunday, prompting the Richmond Police Department to issue a news release disavowing any association with its removal.
The statement read: “The Richmond Police Department is seeking information about the removal of the MDP sign from the Circle. No city agency was involved — including the RPD. It is illegal to remove signage without permission. Whoever did this may be trying to spark more violence in the City of Richmond. Please know that the RPD stands with peaceful demonstrators and will not tolerate those who seek a different, destructive path.” The police department asked that anonymous tips on the sign’s removal be given to Crime Stoppers at (804) 780-1000 or by using the P3 smartphone app. The photos show the sign inside the circle on July 10, and the post stubs that remained later on Sunday.