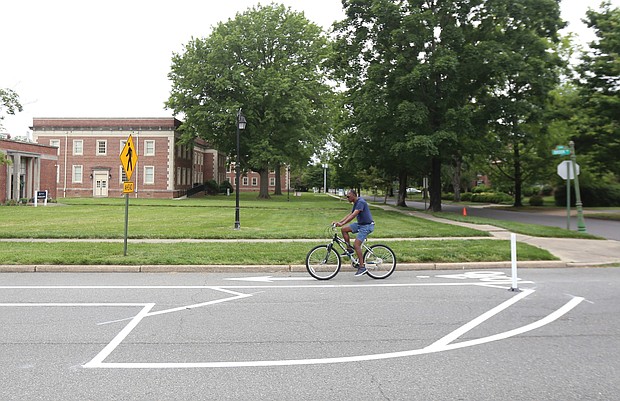 A cyclist pedals along one of the newly installed bike lanes on Brook Road near Westbrook Avenue. A sign explains that parking is allowed to the left in a former travel lane, while bikes stay to the right. More than $1 million in federal funds was spent to install the 3.5-mile stretch in Richmond of bike lanes along Brook Road between Azalea Avenue and Charity Street. Providing room for bikes and street parking is restricting vehicle traffic to one lane in each direction on Brook Road, although there are turn lanes for vehicles at major intersections. Work began after City Hall shut down in mid-March due to the pandemic and is essentially complete. The total $1.5 million installation project also included funding for bike lanes on Malvern Avenue and a portion of Patterson Avenue, according to the city Department of Public Works.