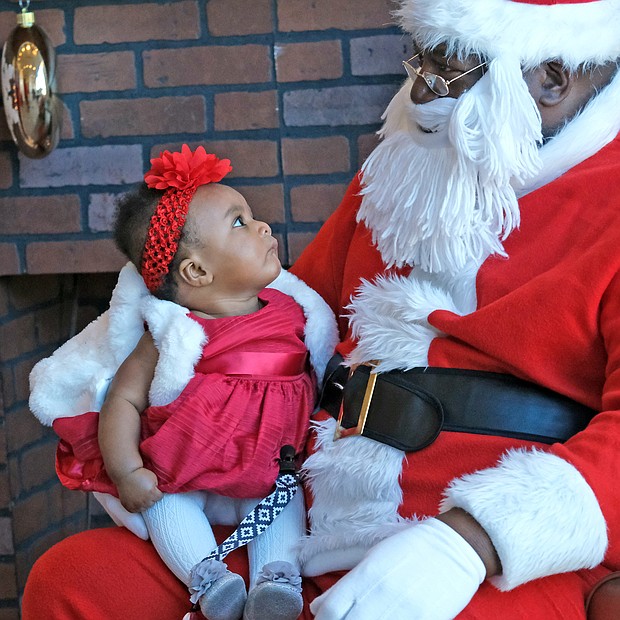 Ayla Hyndman, 6 months, is giving Soul Santa a close examination as if to determine if she can tell him all of her Christmas wishes. This is the first Christmas for Ayla, who visited Soul Santa, aka Floyd Brown, recently with her parents at the Black History Museum and Cultural Center of Virginia. Soul Santa has become an annual tradition at the museum in Jackson Ward. 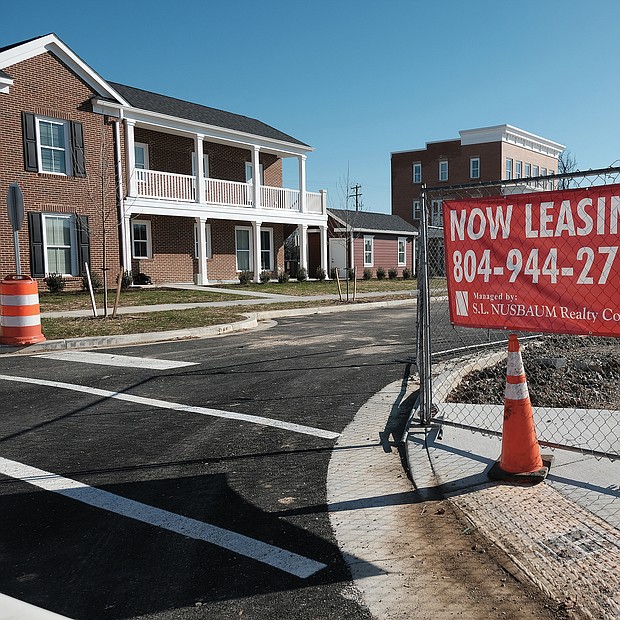 A “Now Leasing” sign adorns an entry to the Church Hill North development on North 31st Street off Nine Mile Road in the city’s East End. While no announce- ment has been made, the sign signals that the yearlong construction on the first phase of new apartments is coming to a close. The development was undertaken by The Community Builders of Boston in partner- ship with the Richmond Redevelopment and Housing Authority. The site is the former home of Armstrong High School, which was torn down to make way for the new residences. The first phase was announced on Oct. 30, 2018, when work began to include 60 family units and 45 apartments for seniors at a cost of about $26 million. Work on another 70 units was begun earlier this year, and those units are in various stages of completion. The total development is to include 256 units, including a few single-family homes. The project is the first step in the overhaul of the nearby Creighton Court public housing community. Some Creighton Court residents are to be moved to Church Hill North as planning for renovation or replacement of the 504-unit Creighton Court complex continues. 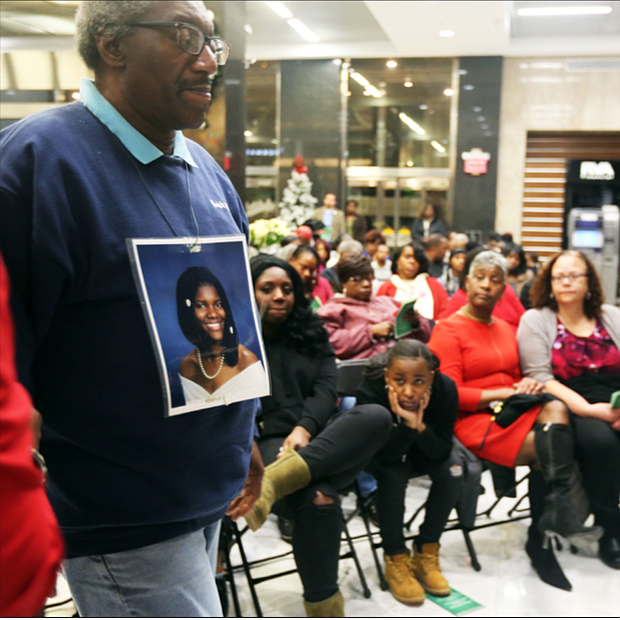 John Burnley of Richmond, below, wears a photo of his late daughter, Juanita Burnley, during the Coalition Against Violence’s 29th Annual Holiday Memorial Service to remember those who lost their lives to violence in the city. Relatives, friends and supporters mourning lost loved ones who were victims of violence at- tended the Dec. 12 ceremony held in the lobby of Richmond City Hall. Participants wrote the names of their loved ones on red ribbons that were placed around the statue, “River of Tears,” that stands situated in City Hall. Mr. Burnley’s daughter was murdered by her boyfriend in No- vember 2007, and he has annually attended the memorial started by Linda Jordan to help family members with their grief and loss through the holidays. 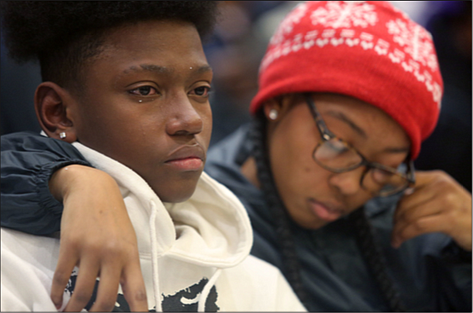 Devin Carter, 15, left, and his cousin, Davionna Green, remember and honor Devin’s brother, Drequan X. Trice, 18, who was killed in August in North Side. 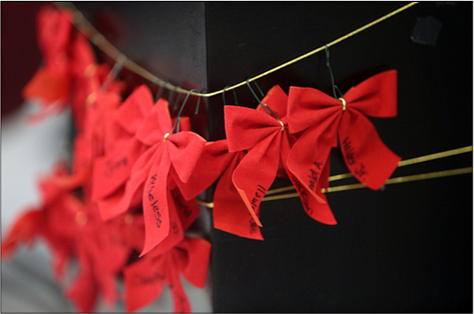 Participants wrote the names of their loved ones on red ribbons that were placed around the statue, “River of Tears,” that stands situated in City Hall. 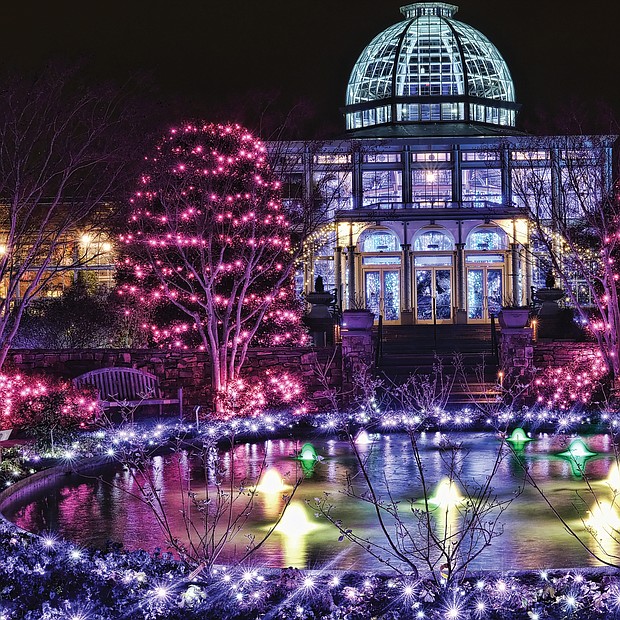 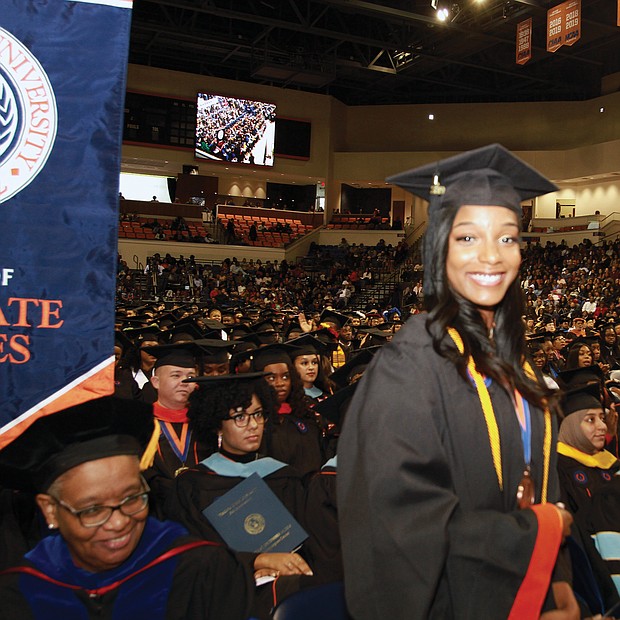 Jessica Brisco stands to be recognized as the top fall graduate at Virginia State University dur- ing fall commencement exercises last Saturday at the university’s Multi-Purpose Center. Ms. Brisco, who earned a 4.0 GPA, received a bachelor’s in information logistics technology. She was among 304 students who received their degrees during the ceremony. 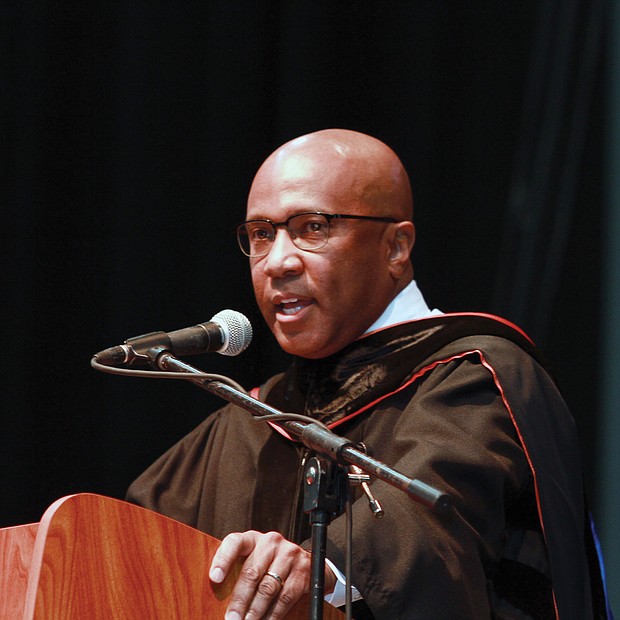 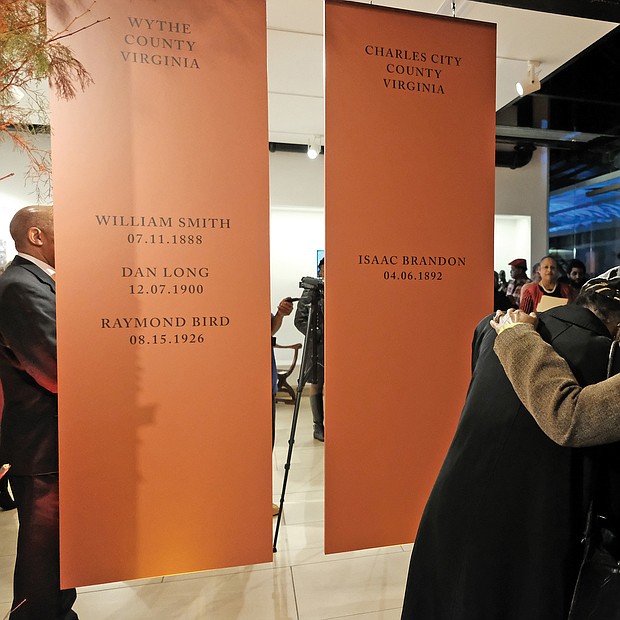 Dozens of people came to the opening Sunday of “Unbound 2019: Truth & Reconciliation: Part III, Emancipation and Enlightenment Up from Slavery” at the Main Street Station Gallery, which includes a tribute to African-Americans in Virginia who were lynched in the decades after the Civil War. Several people attending the exhibit became emotional while reading the names and information about those who were lynched in the state. According to the Equal Justice Initiative, more than 4,000 people were lynched across the South between 1877 and 1950, while nearly 100 lynchings were documented in Virginia during that time. Speakers at the opening included Dr. Cassandra Newby-Alexander, dean of the College of Liberal Arts at Norfolk State University, and Maurice Henderson, whose trip to the National Memorial for Peace and Justice in Montgomery, Ala., inspired the Richmond tribute. 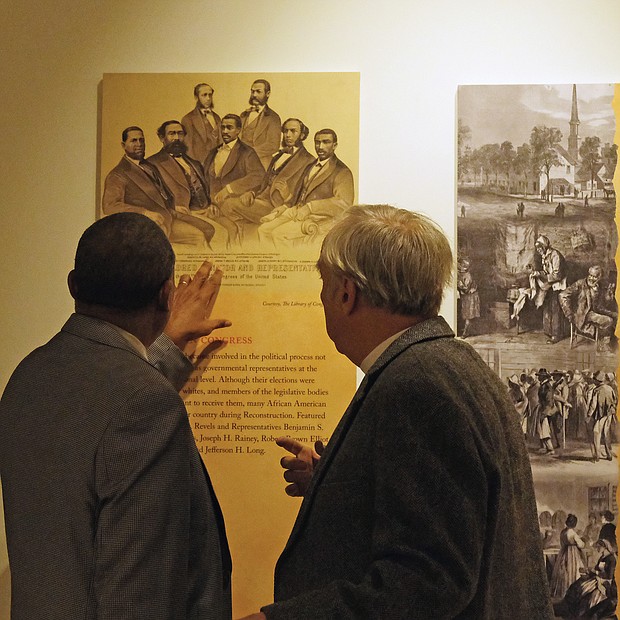 Rev. Sylvester Turner and the Rev. Ben Campbell, both of whom serve on the Richmond Slave Trail Commission discuss one of the panels in the exhibit. 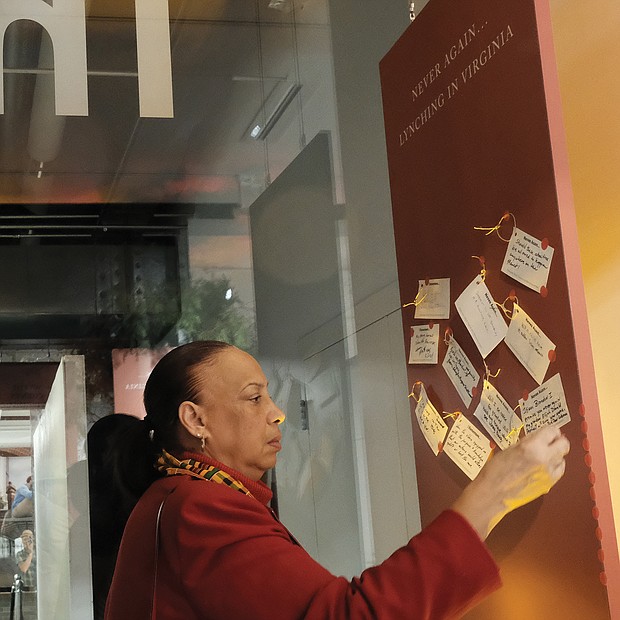 Former Richmond Judge Birdie H. Jamison, right, places a note with her thoughts about the exhibit on a public thought board.